Initial Reaction: A player by player breakdown from Game 3 in Italy 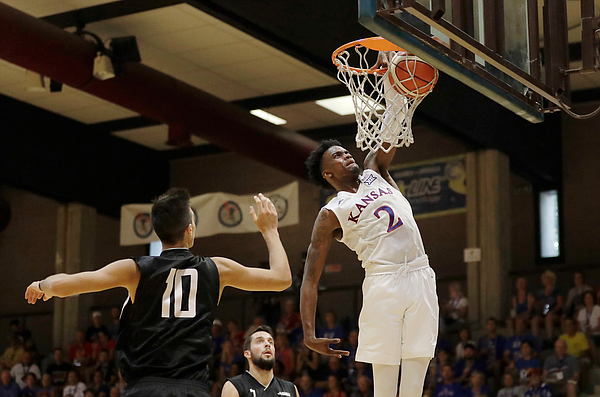 Lagerald Vick with one of his many flushes against Players Group during Game 3 in Italy. by Matt Tait

KU’s third game of its four-game Italian tour brought a little bit of adversity, but the Jayhawks handled it with ease, rolling to a 28-point victory over the same Players Group team they beat by 31 just two nights earlier.

With big man Udoka Azubuike back at the hotel dealing with an illness, the Jayhawks used a guard-heavy attack to sprint past the Italians.

Here’s a quick look at how each player looked in Azubuike’s absence.

• Lagerald Vick – In the first two games of KU’s tour of Italy, it was Devonte’ Graham who set the tone. Saturday night it was Vick, who drove hard to the rim, ran fast in transition and looked borderline unstoppable at times. After a couple of quiet nights, Vick broke out in a big way.

• Sam Cunliffe – His best game in Italy by far. He looked much better moving the ball and feeling comfortable and in a rhythm and seems to be figuring out how to play Kansas basketball. It’s still early but he’s already shown a knack for beating sleeping defenses down the court for easy buckets in transition.

• Billy Preston – Was an animal early for the second time over here. He’s still not converting everything, but that’ll come. The effort’s what they want to see and it continues to be up and down. You can see why the coaches say it all comes down to the mental part of the game with him because he so often looks physically superior to whoever he’s matched up with on the floor.

• Clay Young – The walk-on hustled down a missed FT early in the game and four straight times you heard “Yeah, Clay,” from the bench. It was almost like the “Ahhh, ahhh, ahhh, ahhhh” part in the Beatles’ version of Twist and Shout. Also added a bucket in the fourth that made the pro-KU crowd very happy.

• Charlie Moore - He's shown this trip that he has good handles but it always as if he's looking pass-first, though, as he demonstrated with his gem bullet to K.J. Lawson around the 3:30 mark of the 2nd quarter.

• K.J. Lawson – Lawson looked pretty good on both ends of the floor in this one... Much more in rhythm and comfortable, and he also finished better, was decisive and crashed glass.

• Mitch Lightfoot – The sophomore forward who started for Udoka Azubuike didn’t have a ton to show for it, but he went to the glass hard damn near every time a shot went up... That kind of effort will be rewarded if he sustains it throughout the season. And he knows that. He worked hard on his outside jumper this summer and hasn’t seen the success he’d like over here in Italy.

• Malik Newman and Devonte’ Graham – It’s obvious already that these two guys are really comfortable playing together. They’ve quickly become peas in a pod and more than anything they really seem to get and understand each other. Beyond that, they have fun bringing out the best in each other and trying to outdo one another yet still in a team-first manner.

• Chris Teahan – Got a huge roar from the KU fans in the stands when he knocked down an open jumper in transition early in the fourth quarter. He hit another one a few moments later and the roar was just as loud. As I’ve mentioned, Teahan is always ready to shoot and it looks good, in terms of form, when he does. Most of the make-or-miss aspect just depends on his feet and if he rushes it.

• Svi Mykhailiuk – Another game another smooth outing for the senior from Ukraine. Svi has a poise and polish to his game right now that is only befitting of a senior. Maybe it’s because he’s in Europe, maybe it’s because the games don’t mean as much or maybe it’s because the sharp-shooter is ready for his best year yet. Either way, he appears to be in a very good place entering his senior season.

• Marcus Garrett – Garrett didn’t play much (just four minutes) — KU coach Bill Self said that was by design — and therefore did not do much on the stat sheet. Because he got just four minutes, it’s hard to call the outing a step back. But it was disappointing to see his monster trip hit pause.

If there is one thing that everyone on the planet should know about Bill Self, it is this: if you are a guard who can "get your shoulders" by guys, then you will play - a lot. Ask Tyshawn or Josh or Frank. If Lagerald is listening, the opportunity for him to play - a lot - is sitting right in front of him.