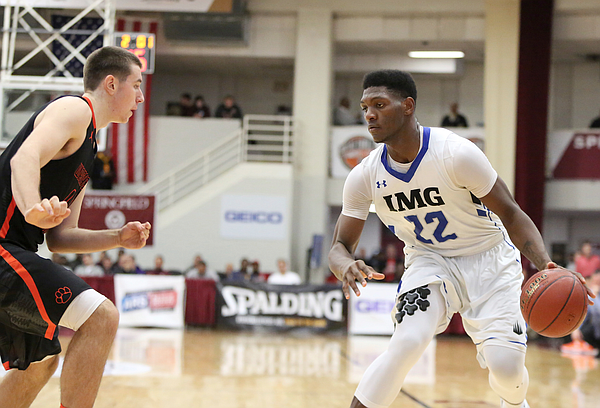 When Class of 2018 big man Silvio De Sousa arrived in Lawrence last weekend for his official campus visit, it marked the beginning of something for which the native of Angola had been waiting a long time.

The chance to play college basketball, De Sousa knew, would come in time and there was no doubt in his mind that he would have plenty of quality offers from first-class programs to mull over when making decision about where to attend school.

But there was always something about Kansas that stuck in De Sousa’s mind.

Perhaps it was the past success and buzz that surrounded former KU players Joel Embiid and Cheick Diallo, both African-born players who made a big impact during their lone seasons at Kansas and now are playing in the NBA.

“I never got a chance to meet them,” De Sousa told the Journal-World on Wednesday of Embiid, who hails from Cameroon, and Diallo, who came to the U.S. from Mali. “But I know who they are and that’s one of the things that made me move on to Kansas. They had such great success there and it seemed to be a good fit for them.”

And while that did not hurt the way the 6-foot-9, 244-pound Angolan viewed the KU program, something more recent that took Lawrence by storm sparked in De Sousa visions of his name on the back of a KU jersey and him calling Lawrence home for a while.

“I always looked forward to getting an offer from Kansas and ever since Josh Jackson committed to Kansas I told myself I could be the next one-and-done there,” De Sousa said Wednesday after sharing the news that he had committed to KU. “I had a lot of offers and stuff like that but I decided to keep quiet and just let everything come in time.”

That “everything” arrived earlier this year, when KU officially offered De Sousa a scholarship at the outset of the summer AAU season. And it reached an exciting conclusion when De Sousa committed to the Kansas coaches before he left town last Sunday.

Set to turn 19 on Oct. 7, De Sousa is not in any way new to basketball. He began playing at age 9 and, according to those who have seen him in action, has a feel for the game and versatile skill set that bring to mind thoughts of a polished prep standout.

ESPN broadcaster Fran Fraschilla — a former head coach at Manhattan, St. John’s and New Mexico — told the Journal-World this week that De Sousa was “destined to play in the NBA,” but the power forward who has been compared to former KU star Thomas Robinson and, going way back, to former Alabama beast Antonio McDyess, does not appear at all focused on anything other than what’s in front of him at Kansas.

“I told Coach Bill (Self) Kansas is the place where I want to be and I made my decision when I was there,” De Sousa said Wednesday. “I met all of the team when I was there. I knew a couple of guys; we played against each other sometimes, with the national team, so I kind of knew them and they were real cool with me. They made me feel like I had been there for the past three years.”

With that vibe fresh in his mind, thoughts of Embiid and Diallo permanently planted there and the image of Jackson becoming a star and jumping to the NBA as the No. 4 overall pick in last June’s draft, the case for KU was too strong for De Sousa to pass up.

Asked if he would sum up his recruitment by saying that things worked out exactly the way he had hoped, De Sousa answered without hesitating.

Sounds like a very nice, mature young man. He definitely has that muscular T-Rob frame too.

I enjoy recruits like this who don't need the fanfare. He seems like a good kid and has some humble to him, but also that self confidence. He's going to be more polished than Embiid or Diallo we're just because he's played the game for so long. I am looking forward to seeing him develop his game and help our team win some ball games! Welcome Silvio and Rock Chalk!!!

Most descriptions make it sound like his game is closer to Thomas than Joel. Very nice pick up.