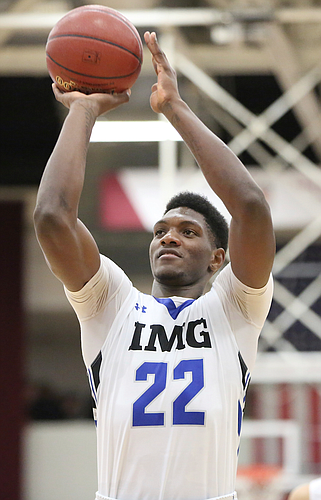 He announced his commitment from an airport in Germany and spent most of the past couple of days traveling from Florida back home to Angola.

But those facts perfectly illustrate the kind of tenacity possessed by Class of 2018 big man Silvio De Sousa, who made his oral commitment to Kansas official on Wednesday in an interview with the Journal-World.

At 6-foot-9, 244 pounds out of IMG Academy, by way of Angola, De Sousa will bring to Kansas the kind of power and speed that have earned him comparisons to former Kentucky forward Julius Randle and former KU All-American Thomas Robinson.

Ranked No. 18 nationally by Rivals.com, and No. 30 overall by the 247 Sports composite rankings, De Sousa chose Kansas over heavy interest from Florida, Illinois, Kentucky, Louisville, Maryland, North Carolina, Syracuse and others.

Those rankings are not high enough, according to ESPN analyst Fran Fraschilla, who got to know De Sousa at the Steph Curry select camp in August.

“I think this kid is one of the 10 best players coming into college next year,” Fraschilla told the Journal-World. “There’s not 5 big men in the country I’d take ahead of him.”

In De Sousa, the Jayhawks are getting a player whom Fraschilla describes as “a beast.”

“He is an absolute stud,” Fraschilla said. “He’s not only high-energy, but he’s an outstanding athlete. And he is going to be a pro. There were things about (former Jayhawks) Carlton Bragg and Cliff Alexander that I worried about and questioned. And other guys who come in a little bit more raw like (Udoka Azubuike) did last year. But this kid is a stud. He has a good feel for the game. He’s, you know, Body By Jake, plays with incredible intensity and, for his size and age, he is very polished. There’s not a lot to not like,”

Wrote 247 Sports recruiting analyst Matt Scott during a recent look at the 2018 class, “Silvio is a strong and rugged power forward. He isn’t flashy, but he is a hard worker who gets a lot of easy baskets by crashing the offensive glass. He can handle the ball a bit and can finish with authority at the rim. He is a good shot blocker and he uses his impressive strength to wall up on defenders making it tough to get a good look at the basket.”

Fraschilla, who has called several Big 12 and KU games for ESPN throughout the past few years and has seen plenty of elite players in his day, both as a broadcaster and a head coach, said De Sousa one day would add his name to the list of NBA prospects to come out of KU.

“Just on his energy and athleticism he’s destined to play in the NBA,” Fraschilla said. “Bill’s gonna love this kid. And Kansas fans are gonna fall in love with his combination of freak athleticism, size, strength and then he’s got a motor that will not quit. He’s a warrior with a smile on his face.”

One thing came to mind watching him and his Angola team: hardwork and ATTITUDE! Just like Franschilla described. That's a BIG plus for a skillful recruit.

And he has been playing basketball for many years and it shows!

Good article and good information. Our 2018-19 roster looks to be perhaps even more impressive than next year's roster.

One minor correction (to this and the lead article): Rivals has De Sousa ranked #25, not #18.

Heckuva baller, regardless his ranking. #25 is even better. He'll let his game speaks, then people will be like... #25? are you sure?

Thanks, Alan. Wonder if that was just updated. As of Monday (when I started tracking De Sousa's journey overseas) I'm pretty sure he was 18th. The guess here is he'll end up closer to the Top 10 by the time it's all said and done. Either way, terrific pick up for Kansas.

Okay, but the season hasn't begun. How about the "very next year for which play has not yet begun"?

We have virtually no idea what the next roster will look like.

We, obviously, might lose some of the last four. But, right now, none of them is listed as a first round 2018 NBA Draft pick. I doubt that all four of them will go to the 2018 draft. I personally don’t think we will lose more than two of those four. If we add at least two of those four to the seven likely suspects above, I think that would be an incredible roster.

I think all of those last four eventually may successfully play in the NBA. But next year’s draft is going to be full of a lot of 1&done, upperclassmen, and foreign talent. Anything can happen, but I doubt that we have four legit early departures in 2018. More or less may happen, but that’s just a prediction.

And Self may land even more 2018 recruits.

It looks good to me based on what I see so far.

Fran says "He’s a warrior with a smile on his face." I didn't see him smile ONCE on that highlight vid. Looks as serious as Frank Mason, if that's possible...