Initial Reaction: A player by player breakdown from Game 2 in Italy 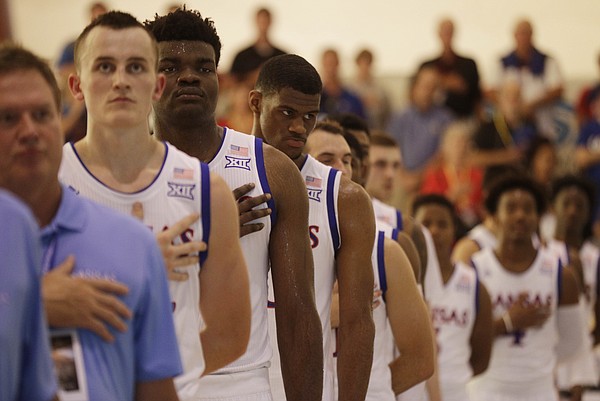 Kansas University players listen to the National Anthem prior to a basketball game with an Italian selection, in Rome, Thursday, Aug. 3, 2017.(AP Photo/Gregorio Borgia)

Because two games is a bigger sample size than one, why don’t we do tonight’s player-by-player breakdown of the Kansas men’s basketball team by comparing the efforts in Game 2 in Italy to what we witnessed in Game 1.

It’s not rocket science and I’m not planning to make any wild leaps or concrete claims about this player or that one. It just seems interesting, especially at this stage of a season that features so many new faces, to take a look at my initial thoughts and see how they held up during my second look.

You get the point. And if you don’t, you’ll have it figured out by the time you’re done reading, hopefully sooner.

• Devonte’ Graham – I might have been more curious about the status of Graham’s game had I not been able to talk to him after KU’s 92-61 win on Thursday night. See, for all of those people out there who have been expecting Graham to jump right in and try to be this year’s Frank Mason, his pass-first mentality over here in Italy might be a bit confusing. But Graham explained it perfectly in saying that he’s not over here “hunting shots.” If he wanted to score 20 a game and be in Italy what Wayne Selden Jr., was in South Korea, he probably could do that with no problem. What you’re seeing, though, is better for the team in the long run. Graham is doing what he has to do now to make sure his teammates are ready and comfortable to help him later. Brilliant plan. I’d expect it to continue in Milan.

• Malik Newman – After a nice game in the opener and an early jumper in Game 2, I thought we were going to see Newman go for 20-plus. He didn’t. Instead, he made just 6-of-15 shots and finished with a nice line of 13 points, five rebounds and four assists. Those are good numbers by almost any standards and I think we’ll find out in time that Newman is who he is and he’s not going to deviate much from that at all. He’s athletic, quick, competitive and can score in bunches if he gets hot.

• Lagerald Vick – After a quiet night in the opener Vick scored eight points in a hurry in the first half and looked to be on his way to a big game. Instead, he finished with those eight points and little else in 23 minutes. Vick might be the one who will require the most time to find out how to play with all of these new faces. Not to worry. It’ll happen. He’s too talented and athletically gifted for it not to.

• Billy Preston – I’ve heard the coaches talk a lot about effort and making sure they’re there to give Preston a kick in the behind to make sure he brings it possession after possession. Two games in, we’ve seen some of that already. That’s not a knock, just reality. And it’s the reason the coaches have said that he’s not quite there yet. Something will happen that will make it all click for Preston. The only question is when?

• Udoka Azubuike – For a guy who seemingly has had a couple of monster games, he sure has been getting his name hollered out a lot by Self and the coaches. That’s because the bulk of what Azubuike has done over here is dunk. And, yeah, that’s great and looks good and gets everybody worked up into a frenzy — what’s the old line about chicks digging the long ball? It’s sort of the same thing with basketball fans and dunks — but it does not mask the fact that Azubuike still has a lot of room to grow and will need to if KU is going to compete at KU’s regular standards this season.

• Svi Mykhailiuk – ‘Svi for three’ was a popular call on Thursday night as the Ukrainian hit three in a row at one point in the first half and just missed a fourth. But we all knew Svi could shoot. So that’s not news. What is news is the way he has carried himself over here. Even though he’s still young — he pointed out Wednesday that he’s almost the same age Preston — he definitely seems like a veteran and carries a been-there-done-that attitude onto the court with him. I like it. And I think it’s going to bode well for the Jayhawks this season.

• Mitch Lightfoot - Bad breaks, literally and figuratively, seem to just keep popping up for Lightfoot, who tweaked his knee briefly (but stayed in and was fine) in Game 2 and also came up short on a couple of deep jumpers. Add to that the pain of the broken nose and frustration of the mask he’s been wearing and you’re looking at a guy who might be more than a little down. Except he isn’t. Lightfoot has kept an upbeat attitude through it all and keeps plowing ahead with a smile/cocky laugh on his face. That kind of approach will assure that he’s ready when the breaks start going his way.

• Marcus Garrett – A couple of years back, I nominated and elected myself as president of the Naadir Tharpe fan club. And while I enjoyed my term and still think Tharpe did some good things along the way, I’m afraid I might be itching to do it again. There’s absolutely nothing I don’t like about Garrett’s game and I think he’s only going to get more comfortable — and therefore dangerous — as he gets more games under his belt. A second solid night sets up Garrett to be one of the real stories of the trip to Italy, provided he can do in Milan what he’s done in Rome.

• Sam Cunliffe – Another quiet night but Cunliffe improved by realizing it and limiting his number of shots. Only played eight minutes and may play even fewer in one of the next two games as Self strives to play his first-semester guys the bulk of one of the next games, but Cunliffe is still in search of what kind of role he’ll play on this team and may be well into the season.

• K.J. Lawson – Knocked down both shots he took — including a good-looking 3-pointer — and snagged seven rebounds, second only to Marcus Garrett on the night. It’s kind of a waste to analyze him game to game since the real analysis with Lawson will come in terms of season to season after his red-shirt year, but it was good to see him look a little more comfortable out there. How about a year of that working to his advantage?

• Charlie Moore – The more I watch him play, the more I like what I see. Moore is a capable — and willing — scorer, but I don’t really get the sense that he’s always looking to score. I think he will if it’s there and he’ll run the team and set up other guys if it’s not. That’s a great combo for a point guard and when you add Moore’s toughness and a year of killer practices and work with Andrea Hudy, it’s easy to see why this young man is set up to succeed.

• Clay Young – Not a lot to talk about here. All zeros except for one rebound. But it’s not the stats that matter with a guy like Young. I really like the fact that he has embraced his role as an upperclassman is and willing to step up to show others the way even knowing that it won’t result in increased playing time. Every team needs a guy like that.

• Chris Teahan – Another guy who looked more comfortable in Game 2 versus Game 1, Teahan is definitely that guy who will send the bench into a frenzy by knocking down a jumper in garbage time this season. The thing about it with Teahan is, one knock-down late could easily turn into two or three, which means more euphoria on the Kansas bench.

KU’s off Friday but we won’t be. Check back with KUsports.com throughout the day as we head up to Milan to check in with the team when they get there while also spending some time looking back on three days in Rome.

Cunliffe is confusing to me so far. He's already shown he can be effective in D1 ball by looking at his stats from his lone semester last year at ASU. So you'd think after 9 months practicing & playing with these guys that he'd be comfortable and also be stronger and more talented simply from being older and more experienced and being around better talent than at ASU. Watching the "Sam I Am" series on Youtube he seems to have a good head on his shoulders, a good work ethic, and a lot of talent. It's just confusing to me that it hasn't translated to the floor at all thus far. Hopefully with another semester of full practices, and presumably more time with the scholarship guys as he nears eligibility before Christmas, it will click for him and he'll start putting all that talent to work.

I agree Shannon. I was/am hopeful Sam can be an impact player on this year's team. We haven't seen a lot so far that would make us think that, but hopefully he'll make a splash when he joins the team like an early Christmas present.