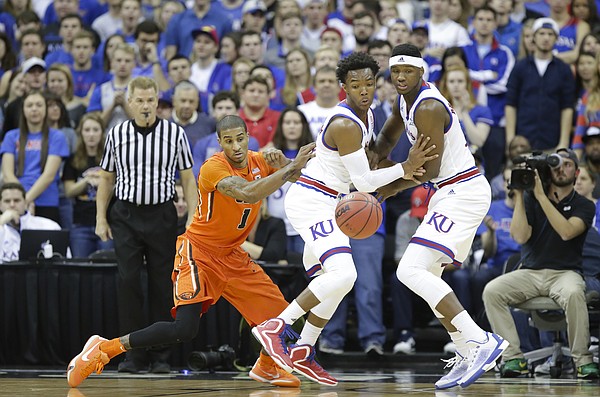 Projecting any given NBA Draft, like obsessing over Kansas basketball in Lawrence, has become a year-round task and no one out there does it better than Jonathan Givony and his staff at DraftExpress.com.

From player profiles, regularly updated mock drafts and traveling around the world to track both the present and the future of the NBA Draft, Givony and crew easily bring the best, most detailed and most interesting information regarding draft prospects.

However, their latest feature, The Top Draft Prospects in the Big 12, caught my attention for reasons beyond just being ultra-informative.

Five of the Top 12 players on Givony’s list call Kansas home and although four of them are guys you would expect to see, the fifth came as a bit of a surprise.

Here’s a quick look at each one, but be sure to click on the link above for the full scoop as DraftExpress sees it.

My take: No brainer. Not even a question. Enough said.

My take: I think Graham is a terrific college player and could be poised for a monster season. I’m just not sure I’d put him this high on this list when you’re talking about the NBA. Although I have no doubts that he can play in the league, he probably won’t be anything special when he gets there. The league is filled with guys his size who are freak athletes and can really play. Graham’s competitiveness will allow him to hold his own, but can he become more? Hard to know right now.

Draft Express: While not blessed with incredible size, both vertically and physically, Bragg is quick and agile for a big man, and can use that to his advantage.

My take: Until we see exactly what Bragg can do with major minutes, it’s hard to argue for him to be higher on this list. Still, it seems a little low to me, given his versatility, good frame, skilled offensive game and potential to grow and become an even better defender. I’d probably flip Bragg and Graham, if it were up to me.

Draft Express: After watching Mykhailiuk extensively this past June at the adidas Nations, and profiling his progress both in scouting report and video format, we prefer to wait and see how he performs as a junior before adding to his extensive DraftExpress profile.

My take: This pretty much sums it up perfectly. Touted as one of the top NBA prospects in a Kansas uniform even before he stepped foot on campus — and even by people named Bill Self — Svi has done very little during his first two seasons in Lawrence to show whether that kind of claim is warranted. Part of the reason for that has been a lack of opportunity, but it also has been the result of a lack of consistency on his part. Still, with his frame, size, skills and athleticism, placing Svi in the middle of this list is certainly fair.

Draft Express: While Lucas is a limited offensive player at this stage, his work on the other end of the floor is what gives him a chance to carve out a niche at the NBA level.

My take: I was a little surprised to see Lucas crack the Top 12, but the reasoning is sound. A lot of what they’re basing it off of is his opportunity to build on a strong junior season and the fact that he does one thing really, really well. With 10 teams and a lot of top-tier coaches, it’s surprising that there aren’t more NBA prospects in the Big 12 that rank ahead of Lucas. But that’s a testament both to Lucas and the fact that the Big 12 is a little down this season.

Do I understand no Bulldog Mason

Frank will most likely have to scrap his way into the NBA as an undrafted free agent, but he did measure in at 5'11.25'' without shoes, and a 6'3'' wingspan at the Adidas Nations this summer, which is better than I expected.

It seems that they're missing the fact that Bragg has grown at least an inch plus filled out significantly as well. The makes him much closer to be NBA capable.

I think Bragg has a legit shot at breaking the top 20 in the 2017 NBA draft. I feel he has the skills needed to play a stretch 4 in the NBA, and has the youth to be viewed with a fair amount of upside.

Granted, his sample size was small last season, but he shot 69% at the rim, which is pretty darn impressive for a lanky freshman. Now at 240, even with more attempts, I expect him to not only be very adept under the basket, but also out to mid-range where he can utilize his feathery jump shot.

Also, this draft class is loaded with freshman at the top, and as we all know, not every one-and-done pre-season projection pans out against NCAA competition, and there is where I suspect a guy like Bragg (who's still 20) to gain some traction in the draft rankings.