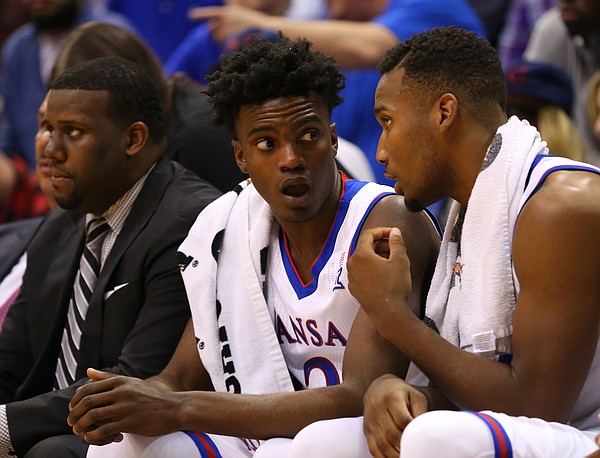 Coaches, teammates and analysts alike all have pointed to Kansas sophomore Lagerald Vick as one of the most impressive Jayhawks during the early going of the 2016-17 season.

Not only have the aforementioned people gone on record to say how impressed they have been by the improvement Vick has made in his game from the end of last season to the beginning of this season, but they also have been wowed by the way he has performed in practices so far this season.

A much more confident and comfortable player than at any time during his rookie season, Vick seems to be sitting on the brink of a pretty big job and a pretty great opportunity to go from end-of-the-bench afterthought to key component on a Top 5 team.

Whether that comes to fruition or not remains to be seen, but the hype and hope, excitement and expectations certainly are there.

In case you missed the earlier installments of this series, follow the links below:

Now, back to what to expect from Vick...

He will: Be a fixture in the regular rotation

This much is a given. And it remains to be seen whether it’s Sviatoslav Mykhailiuk or Vick who plays his way into the role of first guard off the bench and player KU coach Bill Self trusts the most to log big minutes during the 2016-17 season.

It’s possible it will be both and if it is it’ll likely be because of Svi’s experience (as well as his own maturation in the offseason) and Vick’s size, length and athleticism.

There’s a role out there for Vick to settle into and as much as most of the offseason talk has been about his improvement on the offensive end, I’m not so sure that the role he fills this season won’t be more heavily rooted in defense, where Vick can be a nightmare for opposing guards.

He won’t: Score the way he did this summer

Say what you will about Vick’s improvement – and plenty of people have been more than willing to discuss it during recent weeks — but it’s worth remembering that the sophomore guard from Memphis still has a long way to go before he becomes a high-volume scorer for the Jayhawks.

During a couple of summer camp scrimmages back in June, Vick got hot from the outside and poured in a whole bunch of points, scoring as many as 29 in one game. That was the first sign that he had developed a better shot and made some significant improvements in the offseason, but taking that to mean that he’s going to put up big numbers for the Jayhawks this season is a bit of a reach.

There still will be three, maybe four, players on the floor at all times when Vick’s in the game who will be better offensive options. In the backcourt alone, Frank Mason III, Devonte’ Graham and Josh Jackson all figure to push for double-figure averages, leaving Vick to average somewhere in the 4-6 points per game range.

He’ll have a few games where he’ll go for double digits himself, but he’ll also have a few in which he’s closer to scoreless than double digits. It will be important to remember that Vick’s statistics at the end of the season won’t necessarily indicate his importance to this team or the improvement he made in the offseason.

It might not be a wildly popular take, but it’s possible that all of the hype around the jump Vick has made this offseason might be setting him up for failure. At least initially.

No matter how much bigger, faster or stronger Vick has become and no matter how much he has improved his jumper, he’s still a very inexperienced player and could take a while to feel comfortable in his new role.

Doing it during practice is one thing, but doing it in front of 16,300 at Allen Fieldhouse or against Indiana in Hawaii or Duke in New York is something completely different.

This is not a knock on Vick. Enough people who know the game inside and out have said they’re impressed by the player he has become to make it seem like real progress has been made. But real progress or not, the emerging fan favorite still has some work to do to prove he’s completely comfortable when it counts the most. 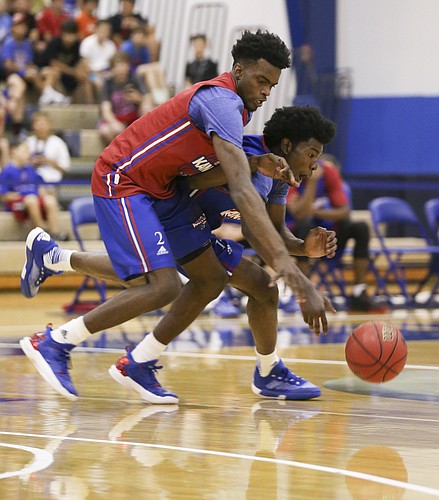 Best case scenario - Vick and Svi are both so good that "going small" is a more regular thing.

Considering Bragg's penchant for fouling, Azubuike's fitness, and Bill Self's comments, the 4-guard lineup will allow plenty of PT for the 5 guards (Mason/Graham/Jackson/Mykailiuk/Vick) that comprise the 4-guard lineup. I don't expect much more than 20 and 10 mpg for Bragg and Azubuike, respectively. That leaves 50 mpg for the 4/5 sports. Assuming Lucas gets 30 of the 50, that leaves 20 mpg for for a guard. Added to the 120 mpg for the other 3 spots brings it to 140 for the 5 guards ...about 28 mpg each!!

Bragg doesn't have a penchant for fouling. He was a frosh. With all the preseason hype he's received he'll get totally different treatment by the zebras.

Lucas and Bragg will play 25-30 mins each. Coleby and AZ maybe 10. That's my fearless prediction.10 mins of "small ball" would be a lot.

Many players foul frequently in their freshman season and quite a few do so in their sophomore season. It's what he has learned about being effective without scoring that is important. Others have overcome the foul problem (think Lucas) and if Vick can do the same he'll be a very effective player.

Fouls in college basketball are called 50% on actual game action and 50% on reputation. Does anyone think that Jeff Withey was really so much smarter after his red-shirt Junior season that he went from fouling constantly to never fouling as a Senior? He wasn't. He just got more respect from the officials.

I was very impressed with Lagerald's performance in Korea, before he had any real seasoning with KU. I think he made a significant contribution in some of those games when Devonte was out with injury and Svi couldn't play for the US team. I've been looking forward to Lagerald's playing since then.

I'd like to argue that Vick seemed to be pretty darned confident while he was on the floor last season, despite his limited playing time. Confidence never struck me as something he lacked.

You are right, Joe Joseph-Vick has never lacked confidence-but he is not arrogant, or over confident! And people, as far as Bragg fouling, remember the added weight he has put on, since last season, and how much stronger he is now, versus last season, and those 2 factors should mean that he will foul a lot less, per minutes played, this season! I hope! LOL