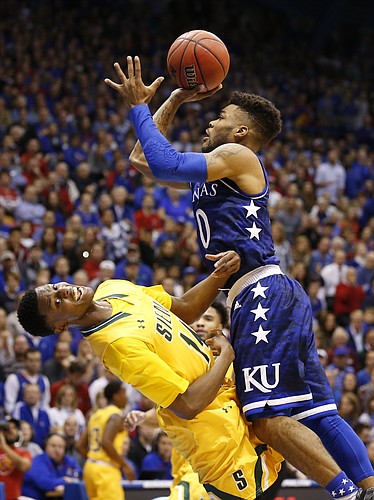 Siena guard Kadeem Smithen (14) falls backward as Kansas guard Frank Mason III (0) is whistled for a charge during the first half, Friday, Nov. 18, 2016 at Allen Fieldhouse. by Nick Krug

Quick grades for five aspects of KU’s 86-65 victory over Siena in the home opener Friday night at Allen Fieldhouse.

The Jayhawks were so good in transition and really responded to Siena’s threats with some big buckets when they needed them, but again struggled from three-point range (3-of-12) and the free throw line (17-of-26). KU did shoot 57 percent from the floor overall.

If you just watched how many times Bill Self rubbed his temples in frustration after watching his team miss an assignment, you might’ve given them an F. But if you looked at Siena’s 37 percent shooting from the floor you’d probably go higher. KU recorded 10 blocks, five coming from Landen Lucas.

There were times when the KU guards were outplayed by Siena guard Marquis Wright. But they always seemed to answer when they needed to, they got a big time game from Lagerald Vick and there were just so many of them.

Vick carried the grade for the bench, as Azubuike played just seven minutes and Svi gave Self at least seven headaches.

Wheres the box score?...hate it that we can't get it on TV down here in Garnett....

Do you get espn3 on your computer? I connected my laptop to the tv via hdmi and we watched the game on tv via espn3. Your cable company or satellite company would have to have an agreement with espn3 or you won't get it.

You can also see it on the WATCH ESPN app. If you have Amazon Fire (stick, tv, kindle), Roku or even your phone. It is subject to Blackouts in certain areas but there are apps and ways around it. I live in NJ and haven't missed a game in years because of the ESPN app. Good luck! Rock Chalk!

New announcer an F! I can't stand to listen to him...

I still remember your column few months back, it's getting real: "Frank Mason is a terrifically tough and talented player, but even he has a few limitations. And, from the sound of things, Josh Jackson is as talented as all get-out and can pretty much do anything he wants to do on either end of the floor. But he also has yet to do it at the major college level. Graham has. A lot. And, as shown by his huge jump from his freshman to sophomore season, the guy is only getting better. Graham is a terrific shooter, a great athlete, a good passer and an outstanding leader. He also can defend at a high level and plays with all-out effort night in and night out. Put all of those traits into the same package and bring that to the court on a consistent basis, and you’re looking at the best player on any team, no matter what the level or what his name is. Even on a team that features Fearless Frank Mason and a potential No. 1 pick in the 2017 NBA Draft, a strong case could be made that the 6-2, 185-pound Graham is the best all-around player and his 2016-17 statistics might wind up validating ..."