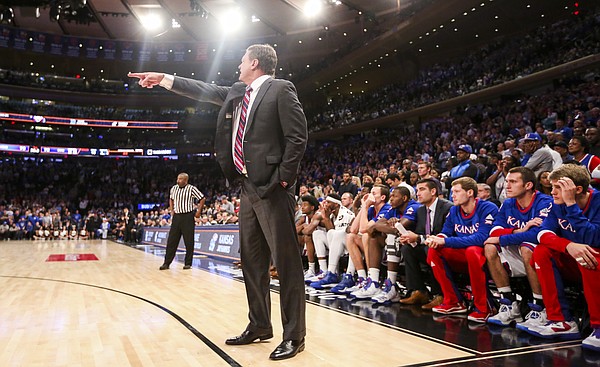 Kansas head coach Bill Self directs his players during the second half of the Champions Classic on Tuesday, Nov. 15, 2016 at Madison Square Garden in New York. by Nick Krug

While many local Kansas basketball fans were rejoicing over the Champions Classic being televised on ESPN and not one of the handful of early-season games that KU fans have a difficult time getting through their cable systems, a good chunk of the rest of the world was watching the game online.

I'm sure several KU fans went this route, too, but regardless of the demographic make-up, KU's 77-75 victory over No. 1 Duke on Tuesday night set a record for ESPN's online streaming services.

According to ESPN, the total live audience for the game, which includes television viewers and the streaming audience, topped 2.4 million, up 28 percent from last year's KU-Michigan State game, which drew a combined audience of 1.9 million.

For comparison, the first game of Tuesday's Champions Classic doubleheader, No. 2 Kentucky’s 68-49 win over No. 13 Michigan State, picked up a total live audience of 2.15 million viewers, including a streaming audience of 67,000 average viewers, making that game one of the top five largest men’s college basketball regular season streaming games on ESPN.

The two Champions Classic games combined had a streaming average minute audience of 76,000 viewers, up 21 percent from the 2015 event.

The Champions Classic is owned and operated by ESPN Events, a division of ESPN, and recently signed a three-year extension to play the event through 2019.

With the way people are watching their sporting events changing by the day, with more people abandoning cable and going with online streaming services, the numbers figure to continue to rise into the future, as consuming games in this manner, be it at home on the couch or on the go on a tablet or cell phone, certainly seems to be a sign of the times and a legitimate part of the college sports experience.

Considering the numbers cited speak about the average per minute I would be curious to know what was the maximum number of viewers reached at any one time during the game. Just curious.