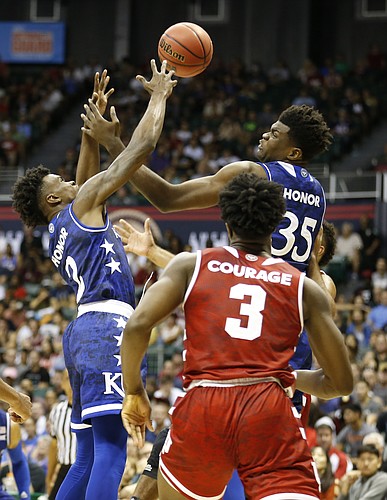 Kansas guard Lagerald Vick (2) and Kansas center Udoka Azubuike (35) fight for a rebound over Indiana forward OG Anunoby (3) during the first half of the Armed Forces Classic at Stan Sheriff Center, on Friday, Nov. 11, 2016 in Honolulu, Hawaii. by Nick Krug

Quick grades for five aspects of KU’s 103-99, overtime loss to No. 11 Indiana in the Jayhawks’ season opener Friday night in Honolulu, Hawaii.

Scoring 99 points and shooting 52 percent in the first half generally sounds like a nice start toward a good offensive night. But too many key contributors — most notably Devonte’ Graham and Josh Jackson each going 3-of-11 — struggled in this one, leaving the door open for Indiana to walk out with the win.

KU allowed the Hoosiers, who shot 43.7 percent for the game, to make 48.4 percent of their three-point attempts. That alone was enough to kill Kansas, saying nothing about KU’s difficulty keeping the IU guards in front of them at times.

Landen Lucas’ 11 and 7 were good, but he had an opportunity to do better and didn’t. Carlton Bragg took a nice step forward but still had a few mental mistakes and no one else was much of a factor up front. KU also was out-rebounded 50-39 and blocked just 2 shots.

Anytime you have a player do what senior point guard Frank Mason III did in this one, that’s going to be enough for an entire unit to get an A of some kind. Mason flirted with a triple-double by pouring in 30 points, 9 assists and 7 rebounds in 40 minutes.

Although Svi was one of KU’s better players in the game, his bench mates — though lacking for opportunity — did not do much to help the Kansas cause. Lageraled Vick scored 7 points and grabbed 1 rebound in 28 minutes and Udoka Azubuike, Mitch Lightfoot and even Tyler Self did not even combine to play 10 minutes.

we need help at the 5, which was our weakness last year, and rebounding. pretty simple to see that.

For the 20th time, min, another teams lights us up from the 3 and we lose. Granted some were guarded and still went in (the last ones in reg). But that has been one of our weakness that mid-major and other teams have exploited.

It's as if it's difficult to beat a team that's shooting lights out from 3...

The bottom line is, most of those made 3's were guarded. A few were wide open but that happens every game for every team. The two back to back guarded 3's down the stretch weren't the fault of the defense. It was a "great defense, better offense" situation. There is NOTHING you can do to help those situations. When they have a player score 22 points in the second half, you know he's just on fire and is going to make buckets regardless of the defensive effort.

I want to see how our top dog recruits perform against other top 25. A quick glimpse, Josh scored 9, Udoka 0, while Bridges, Simmons (Arizona) double digits. Minutes played? Josh seemed to play a lot. But Udoka? fat chance he will see a lot of play time this season. Looks like Lucas is still coach's favorite 5. No mistakes allowed for the freshman.

And now the "shoe" is on the "other" foot

As some of you know I am an Oklahoma fan (yuk) and last year made some notice of my disdain of this "Overtime and Extra Inning" crap. In my world, when time runs out IN OFFICIAL GAME TIME, the score is the true and accurate decision of the game. A tie is a tie. Period.

BUT........in our "winner and loser" society, this just is not capable that there can be "ties" in sports contests. "WE GOTTA HAVE A WINNER AT ALL COSTS AND FRAUDS!!!!"

Well OU lost an overtime game last year, to my displeasure as many of you might remember.

Now the shoe is on the other foot. KU played a great game to a tie. But lost in the fraudulent overtime. WE GOTTA HAVE A WINNER!! This time it was Indiana who is also tarred by the brush that they COULD NOT WIN in regulation time. Great fraud!!!!

Will we see a correction of this aberration?? Not very likely, baseball has been doing it for longer than I can remember.

Matt, A major concern I have for this team (besides rebounding) is our "transition" defense is horrible. Our half-court defense is great but even Washburn lit up our transition D. I think a big reason for the poor transition D is actually caused by our offense. When our only offense is generated by guards driving then we are going to get killed going the other way because our guards (who are the "safeties" on offense) are caught under the basket or flying on the floor by the pylon and can't get back in time. We would almost be better served going back to the "pass it around the perimeter looking to go inside and high-low then the dribble-drive offense we are using. At least we have people back on defense this way. I realize shot clock and breakdowns will force Mason to drive at times but when he does all 3 or 4 other guys better be rotating back high.

KU was bullied, bloodied, pushed around for rebounds. I don't remember this happening in a long time. That costs possessions and points. The transition D was miserable also. you have to know where the shooters are.