Is a new, red, Jayhawk-themed helmet in the works for KU football? 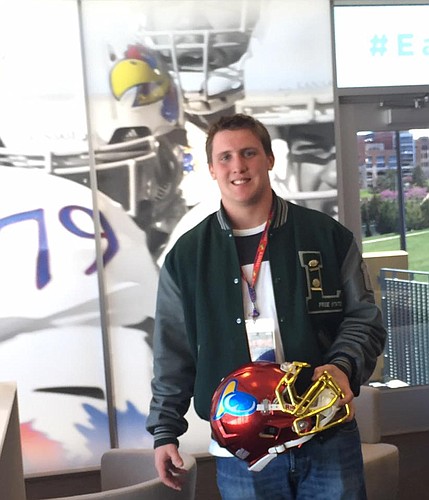 New KU commitment Jay Dineen, a senior-to-be at Free State High, poses with a new-look KU football helmet during a visit to campus before committing to the Jayhawks. by Matt Tait

Recruiting news, be it on the basketball front or the football trail, always seems to drum up serious interest from fans of Kansas University athletics.

And this week certainly has provided plenty of excitement. Second-year KU football coach David Beaty and company landed three oral commitments from athletes in the 2017 recruiting class, including local standout Jay Dineen, the younger brother of current KU linebacker Joe Dineen and a senior-to-be at Free State High in Lawrence.

Wide receivers Kaltuve Williams, of New Orleans, and Reggie Roberson, of Dallas, rounded out the commitments — thus far — bringing KU’s total in the class of 2017 to six, four of which are three-star prospects according to Rivals.com.

While all of the accolades and numbers associated with these players certainly speak for themselves, one of the more subtle moments of the aftermath of their commitments might be just as interesting to KU fans.

A couple of hours after Dineen committed to Kansas on Monday night, his mother, Jodi, a former KU volleyball player herself, posted a photo of Dineen at KU’s Anderson Family Football Complex, presumably during one of his visits to campus.

Could this be the unofficial unveiling of a new KU football helmet for the 2016 season and beyond? It obviously won’t be KU’s permanent helmet, but maybe it’ll be used for one of those throwback or gimmick games, when the team wears something out of the ordinary to get the players and fans fired up and, of course, sell more merchandise.

Over the years I’ve seen a bunch of fan mock ups of what KU’s football helmets should look like. Some have been pretty slick and others have fallen just short of horrendous.

This helmet that Dineen is showing off, at least to me, lies somewhere in between the two and I wouldn’t mind for a second seeing the Jayhawks take the field for a game or two wearing these bad boys.

I tried to get ahold of a couple of people in the football office who might be able to provide more details, but they were out. Beaty and a few others are in Tulsa tonight talking to KU supporters in the Sooner State so it’s possible they were en route as I wrote this.

I'm guessing it's just one of those one or two-of-a-kind helmets they make up for recruiting purposes and won't actually be used on game day. I know KU and pretty much every other major college football program likes to create these types of things to get the recruits jacked up when they come tour campus.

I’ll jump back on here with an update if/when I get some kind of answer. For now, enjoy imagining what 100 of these helmets might look like lining the west sideline at Memorial Stadium.

I'm guessing that, by somewhere between slick and horrendous, you mean that the helmet/faceguard combo is the portion that is slick. And right you are. On the flip side, that decal is just dorky. In the realm of decals, we don't need: 1) friendly vibes;2) cartoonish/childish, 3) ultra modern/ Oregon inspired designs;4) plain Jane, 5).

I'm all for clever and fresh, but only if its done well (and not garish).

For the love of God stop screwing w/the helmets. I've got this crazy feeling that's not the problem w/Kansas football.

Recruits love, I mean absolutely love, this kind of stuff. I love what Beaty is doing.

Recruits like winning and going to bowl games more. Concentrate on that. I don't want to hear about uniforms anymore.

Matt, I could be TOTALLY wrong on this, but you referred to one of KU's most recent commits as "Kaltuve Williams." Are you sure you don't mean "Takulve" Williams?

Make the team look like Jayhawks - Red helmet with yellow facemask and Jayhawk logos on either side, blue jerseys with white numerals, blue pants, yellow shoes with red laces.

In the name of all that is holy I pray that these helmets never see the light of day!

When you're the laughing stock of college football that helmet certainly won't help.

More importantly, why does his Free State letter jacket have an L? Shouldn't it be a F?