The Day After: Icing on the cake vs. Iowa State 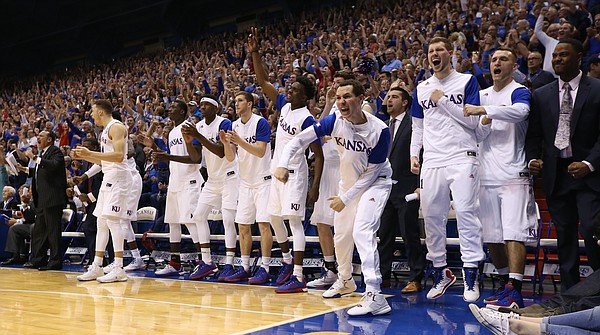 The Kansas bench explodes after a late bucket by Devonte' Graham during the second half on Saturday, March 5, 2016 at Allen Fieldhouse. by Nick Krug

For a game that really meant nothing in the big picture of the 2015-16 season, you sure couldn’t have asked for a better postseason primer than the one the Kansas Jayhawks got during Saturday’s 85-78 win over Iowa State at Allen Fieldhouse.

In the past four or five years, this rivalry really has returned to the status it enjoyed in the Big Eight days when Johnny Orr was the ISU coach and Fred Hoiberg was a Cyclones guard.

Saturday’s game was another classic and probably would be remembered that way if it had come in mid-January or early February. Instead, it will go down as little more than the perfect cherry on top of yet another memorable KU hoops season.

Seniors Perry Ellis, Jamari Traylor, Evan Manning and Hunter Mickelson were sent out of the KU gym on a winning note and the Jayhawks got major contributions from the trio of underclassmen — Devonte’ Graham, Frank Mason and Wayne Selden — that has been driving this ship most of the season.

The victory gave Kansas its 27th victory of the season — against just four losses — and put KU’s final Big 12 record at 15-3. Unreal. Especially this year. What’s more, KU got sweet revenge on the three Big 12 teams it lost to this season, with Saturday’s triumph over the Cyclones capping the three-for-three mark on the revenge tour.

There’s little doubt that this team is ready for a serious postseason run and has positioned itself very well to make that happen both in the Big 12 tournament next week in KCMO and the Big Dance beyond that. The Jayhawks are playing with extreme confidence, have found a way to make clutch plays in the most crucial moments and have great balance both in the scoring department and on the defensive end. The talent, depth, experience, leadership and hunger are all there, too. But more important than any of that might be the fact that both KU coach Bill Self and his players understand that, as good as they feel about things today, it can all disappear quickly if they don’t maintain their focus. “I couldn’t be more confident about these guys moving forward,” Self said after Saturday’s win. “But I also know that the energy level we had (in Saturday’s first half vs. Iowa State), that might be enough to go home in a one-and-done game.”

1 – Boy, does KU know how to turn it up down the stretch. Trailing 71-68 with 5:09 to play after a pair of free throws from Iowa State’s Georges Niang, the Jayhawks unleashed an 11-0 run in the next 4:22 to take a 79-71 lead into the final 47 seconds. The run was as much about KU’s defense as it was the Jayhawks making shots and, of course, the Fieldhouse faithful did their part as well. Even though they trailed with crunch time nearing, you never got the sense that this team even remotely thought it might lose. “We talked about closing,” Self said after the game, saying he told his team, ‘This is what we do, we close.’” Close they did. Against a good team that was playing at a high level. 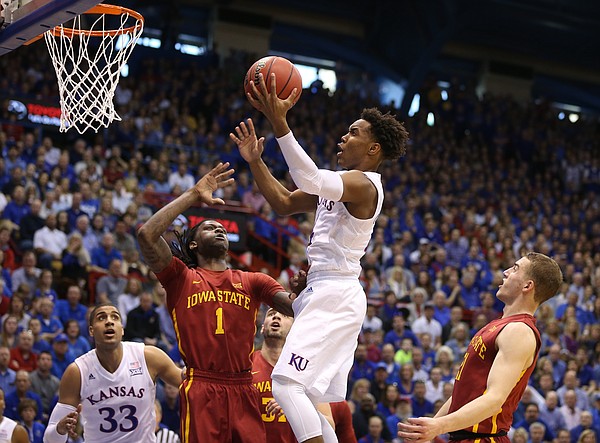 Kansas guard Devonte' Graham (4) gets in the paint for a shot before Iowa State forward Jameel McKay (1) during the first half on Saturday, March 5, 2016 at Allen Fieldhouse. by Nick Krug

2 – Devonte’ Graham sure seems to be loving the spotlight and big moments more and more by the day. Asked after the game if he thought he was one of the most clutch shooters on the team, Graham laughed and said, “I guess you could say that.” He then added that he’s very confident in his ability to make the key shot or right play to help his team get a win when it counts. Self agreed but added that one of the things that makes this team special is that several players feel that way. “I think you could say the same thing about Frank and Wayne and Perry,” Self said. “I think they’re all clutch guys.” And that makes them awfully tough to defend, start to finish, all over the floor. 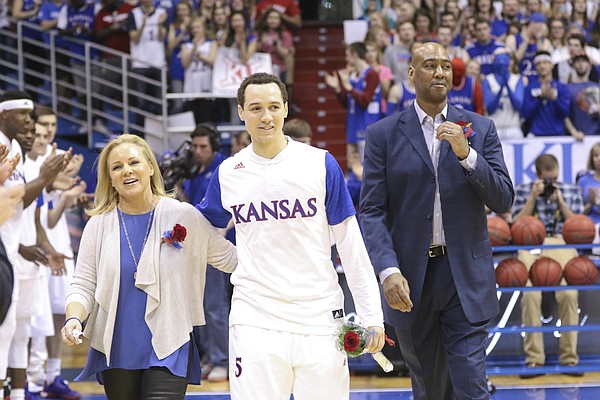 Kansas guard Evan Manning walks with his mother Julie Manning, followed by his father Danny Manning as they are introduced to the fieldhouse on Saturday, March 5. by Nick Krug

3 – It was so cool to see Evan Manning get some love and to see the look on his dad, Danny’s, face when he did. Not only did Evan make the first start of his career, he also looked like he belonged when he was out there and probably could’ve played more. When you’ve got guys like Selden and Graham sitting on the bench, though, it’s hard to justify playing him more than he did, even on Senior Day. Still, it was a very cool moment for one of the best people to ever put on a KU uniform. Really, the whole Senior Day experience was pretty cool with Hunter Mickelson, and especially Jamari Traylor and Perry Ellis also getting a lot of love for their long KU careers and all they’ve given to the program. Sometimes the Senior Day thing seems a little played, but this year was a great reminder of why the day can be so special. Credit the quartet of seniors and their character for that.

1 – KU got next to nothing from the combination of Svi and Brannen Greene. Both reserve wings have had great moments and stretches in the past month but on Saturday they combined for 0-of-5 shooting in 14 minutes and scored just four points, all on free throws from Greene. KU’s going to need both of Svi and Greene if it hopes to make a deep tourney run and it will be interesting to see if these past couple of off games were just that or the start of some kind of greater concern. 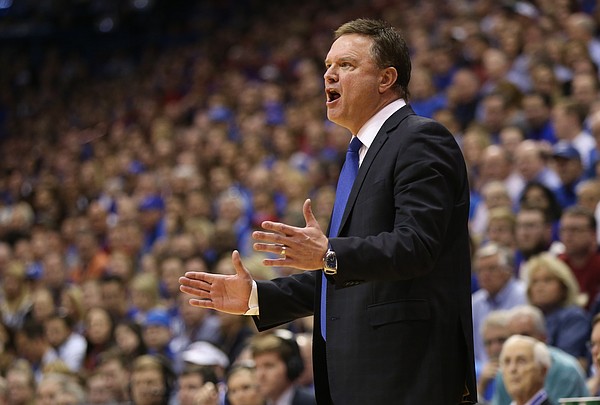 Kansas head coach Bill Self gets at his players during the second half on Saturday, March 5, 2016 at Allen Fieldhouse. by Nick Krug

2 – As Self mentioned in his postgame comments, KU’s defense was a little off on Saturday. Most of the credit for that goes to Iowa State and their high-quality offense, but, still, KU gave up way too many easy buckets at the rim and allowed the Cyclones to shoot 47.4 percent. ISU became the first team since Kentucky on Jan. 30 to shoot greater than 41.5 percent against this suddenly surging Kansas defense. 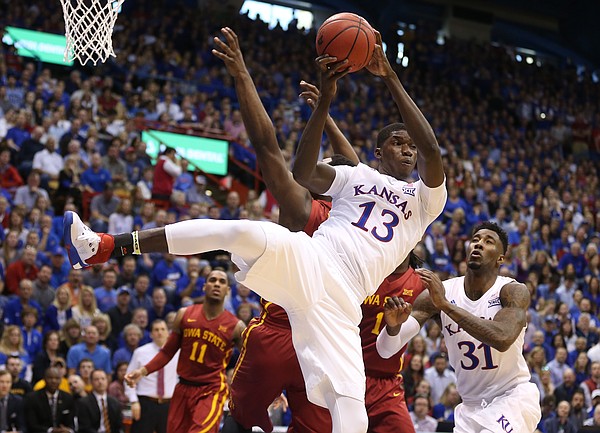 Kansas forward Cheick Diallo (13) pulls down an offensive rebound during the first half on Saturday, March 5, 2016 at Allen Fieldhouse. by Nick Krug

3 – You never know how these things are going to go, but Saturday also could have been the last Allen Fieldhosue game for a few other Jayhawks. While we know Manning, Mickelson, Ellis and Traylor won’t be back, there’s also the possibility that as many as four others won’t return. Wayne Selden could declare for the NBA Draft and freshmen Cheick Diallo and Carlton Bragg could join him. There’s also a chance that Svi could leave, too. I’d be willing to bet that at least two of those four will be back and possibly all four. But the reason this falls in the category of a reason to sigh is because this early departure stuff just continues to change college basketball as we know it. Wouldn’t it be cool to see more Jamari Traylors and Perry Ellises and fewer one-and-dones? Oh well.

Secured Kansas' 26th win for the ninth time in the last 10 seasons.

Gave the Jayhawks their 11th-straight win over Iowa State in Allen Fieldhouse.

Gave KU an undefeated record (16-0) in Allen Fieldhouse for the second-straight season, and 19th overall.

Continued a streak since 2001 of no team Kansas has played more than once in a conference season sweeping the Jayhawks.

The top-seeded Jayhawks will open play in the Big 12 tournament at Sprint Center in Kansas City against the winner of the 8-9 game between Kansas State and Oklahoma State. Tip-off is set for 1:30 p.m. Thursday on ESPN2. 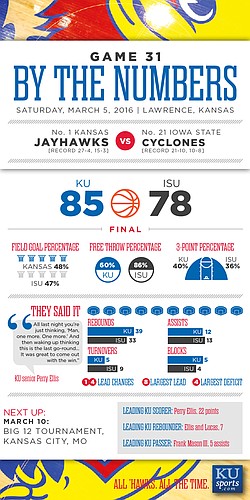 Not one underclassman should leave early. I do not think any of them are NBA ready, even on the bench.

I'd agree with that, but you know by now that the NBA doesn't take kids because they're ready...

It's money time. Sort of like the NFL combine. Anyone of these guys, and a couple more for that matter, if they play lights out on their way to a couple more championships could declare and be selected. Mario is sort of the classic example of that. Can't imagine he declares or gets selected if not for the shot. There are others from other teams in particular as well.

Funny, Diallo is first on your list to depart, yet would likely benefit the most by returning. He's the most talented yet least polished and would get much more coaching at KU than the D-league.

I legitimately think Wayne has the potential to have a senior year like Buddy Heild. Heild was definitely a very good player his entire college career, but he put it all together and achieved near his true potential in his senior season. I have no doubt Wayne has that ability if he were to stay one more year.

RE: "Wouldn’t it be cool to see more Jamari Traylors and Perry Ellises and fewer one-and-dones?"

With respect to more Jamari Traylors and Perry Ellises, yes. But at the expense of one-and-dones, quite frankly, certainly not. After all, we've had OADs here during the last four years and not a single one of them has prevented our enjoyment of the two players you mention. No need to fight for more elbow space at the table when all may eat comfortably.

By the way, Coach Self says he'd be fine with a couple of those guys every year. We've never had more than 2 OADs on the squad at the same time, so according to Coach, there's no reason to change anything.

We may end up with an entire team full of OADs when we sign the 2017 class. With this year shopping up to be relatively unproductive, next year could be huge with 3 or 4 top 10 recruits...the OAD types.

There is nothing in the current situation or any that project into the future that jibes with what youre saying.

I like your article overall, but I have to disagree that this game "meant nothing in the big picture of the 2015-2016 season"... There where several things to play for (no particular order - everyone will have their own order of preference).

Cheick needs to return and learn something about basic basketball. He has some physical capabilities but is completely basketball illiterate. That an NBA GM would consider drafting him in the first round is a sign that The League has completely fleeced NCAA ball.