The Day After: Hounding the Huskies 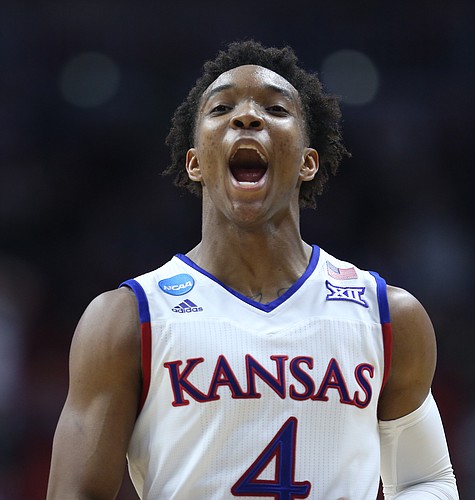 Kansas guard Devonte' Graham (4) celebrates after a dunk by Wayne Selden Jr. during the second half on Saturday, March 19, 2016 at Wells Fargo Arena in Des Moines. by Nick Krug

The Kansas Jayhawks are back in the Sweet 16, a place they have not been since 2013, when Ben McLemore, Elijah Johnson, Travis Releford and Jeff Withey were roaming the court for Kansas.

That year, the Jayhawks followed up their 2012 national title game run with a strong season that seemed bound for an Elite Eight match-up with Florida, before a late collapse against Michigan in the Sweet 16 in Dallas sent the Jayhawks home.

This year, KU rolls into the Sweet 16 after impressive victories over Austin Peay (105-79) and Saturday night’s 73-61 win over UConn.

As has been the case for much of the season, different players stepped up at different times for the Jayhawks, who were led in Des Moines by both a reserve wing player and two front-line leading scorers.

That type of depth makes this team such a beast to prepare for and game plan against and is a big reason the Jayhawks (32-4) are still playing into the second weekend of this year’s tourney.

KU’s first half against the Huskies was good. Really good. And it showed exactly why the Jayhawks entered this tournament as the favorite to win it all and a popular pick in many brackets to make a deep run. The Jayhawks’ confidence is as high as it’s been since the 2012 team — led by Tyshawn Taylor and Thomas Robinson — reached the national title game and it appears to be growing by the day. In a game that seemed as if it could pose a strong test for the top seed, the Jayhawks raced out of the gates with great energy and buried the Huskies early. That start showed exactly where this team’s mindset is at this point in the season and their comments in the locker room after both games only confirmed it — happy but not satisfied. This team wants more and plans on getting it.

1 – You have to start with KU’s defense, if you ask me. The Jayhawks were so tenacious in that first half that they really took UConn out of its game. The guards harassed the Huskies ball handlers and challenged every shot and the bigs dominated the interior. It was a much more dominating performance than even the stats showed, mostly because the intensity and desire in the faces and body language of the Jayhawks does not show up on the stat sheet. These guys flat-out got after it and never gave UConn a real chance. 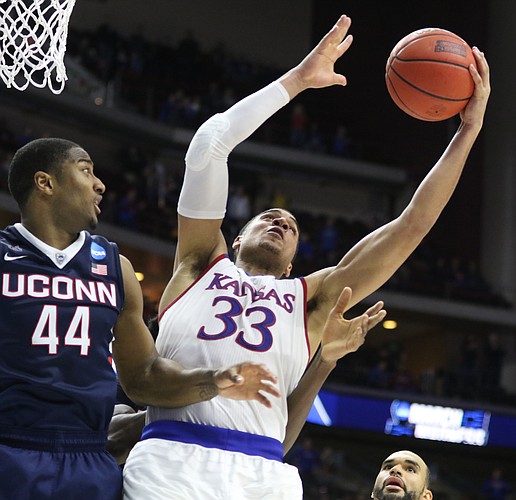 Kansas forward Landen Lucas (33) pulls a rebound from Connecticut guard Rodney Purvis (44) during the second half on Saturday, March 19, 2016 at Wells Fargo Arena in Des Moines. by Nick Krug

2 – Wayne Selden and Perry Ellis carried the load offensively, but junior big man Landen Lucas was as good, if not better, than both of them. Lucas absolutely dominated the glass — helping lead KU to a 44-24 rebounding advantage — and played as big as he has all season long. Lucas’ strong effort hardly came as a surprise and was mostly a continuation of a strong run of solid games in the second half of the season. Lucas’ 6 points, 12 rebounds, 4 assists and 3 blocks were way bigger in this game than any of those numbers actually sound. 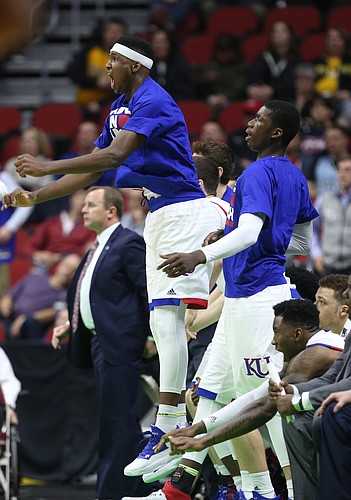 Kansas forwards Carlton Bragg Jr., left, and Cheick Diallo react to a dunk by Wayne Selden Jr. during the second half on Saturday, March 19, 2016 at Wells Fargo Arena in Des Moines. by Nick Krug

3 – All right. Enough. How about that one-handed, hammer dunk by Wayne Selden? Shades of Tyshawn Taylor to Thomas Robinson against Baylor in the Fieldhouse right there. So good. So emphatic. And such a perfect exclamation point on a solid KU win.

1 – There’s no two ways about it, Frank Mason had a rough night. And it wasn’t just that he missed seven of the eight shots he took. He also looked sloppy with the ball and too often turned it over in a manner that led to easy transition points for the Huskies. Mason was still key to KU’s victory (he added five boards, four assists and a 6-of-6 clip from the free throw line) but his shot looked slow and uncertain out of his hand and when he drove, he did so with a lot of action that too often seemed to get him nowhere. That might have just been an indication of how quick UConn’s guards were, but KU’s going to need Mason to be better if it wants to keep advancing. 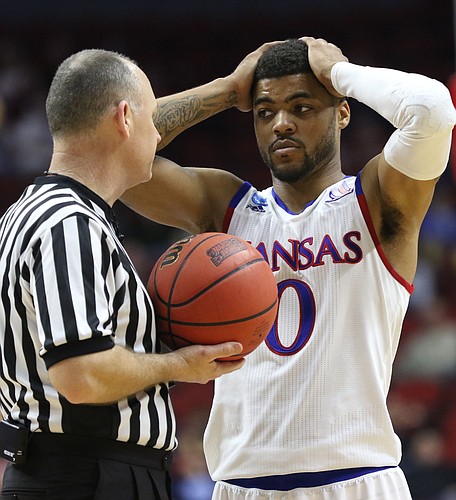 Kansas guard Frank Mason III (0) has a talk with a game official after some chippy play with Connecticut guard Sterling Gibbs during the second half on Saturday, March 19, 2016 at Wells Fargo Arena in Des Moines. by Nick Krug

2 – It’s a bit inevitable that a 20-point halftime lead is going to get cut into at some point during a college basketball game. Rarely do you see a team with that big of a lead at the break add to the lead in the second half. Espeically when playing a good team. So it’s not the fact that UConn trimmed the Jayhawks lead to nine that was a concern, rather the way it happened. Connecticut’s pressure bothered the Jayhawks and KU momentarily unraveled because of it. 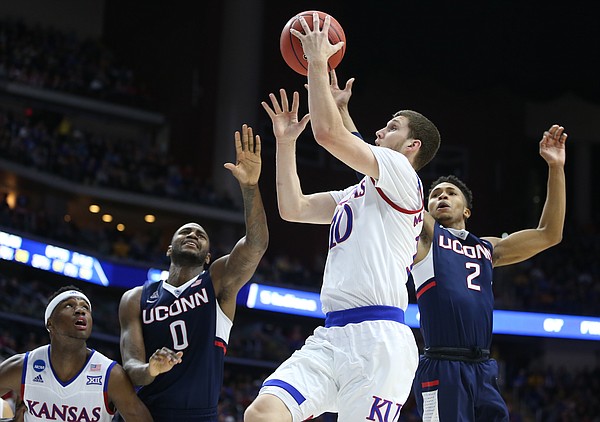 Kansas guard Sviatoslav Mykhailiuk (10) gets to the bucket between Connecticut forward Phillip Nolan (0) and guard Jalen Adams (2) during the first half on Saturday, March 19, 2016 at Wells Fargo Arena in Des Moines. At left is Kansas forward Carlton Bragg Jr. by Nick Krug

3 – Two nights after Jayhawks got a huge night from their bench, the KU reserves gave next to nothing against UConn. A big part of that was the lack of opportunity for the bench to contribute. KU’s starters all played 32 minutes or more and Self only dished out 29 combined bench minutes to four different players. In that time, only Carlton Bragg (2 points on 2 offensive rebounds in 4 minutes) and Sviatoslav Mykhailiuk (1 point in 6 minutes) managed to score. The best bench contribution came from Jamari Traylor, who, in 10 minutes, blocked three shots and grabbed a pair of rebounds.

• Frank Mason: Went 6-for-6 at the free throw line and is now 11-for-12 at the charity stripe during NCAA postseason play this season.

• Wayne Selden: After a 22-point effort on Saturday, Selden is averaging 18.0 points during the NCAA Championship this season. He entered the postseason with 10 total points in his first four NCAA postseason games.

• Devonte' Graham: One of three Jayhawks in double figures, scoring 13 on 4-of-8 shooting.

• Perry Ellis: Now has 1,767 career points to enter the top-10 on KU's all-time scoring list. Ellis passed Kirk Hinrich (2000-03; 1,753) with a three-pointer at the 4:08 mark of the first half, which gave KU a 38-16 lead. Ellis has tallied six 20-point scoring efforts in the last seven games and has scored 100 points in five postseason games this season on 61 percent shooting from the field.

The Jayhawks will move on to the Sweet 16 for the first time since 2013. Next week, they head to Louisville, where they will take on the winner of the second-round match-up between No. 5 seed Maryland and No. 13 seed Hawaii (6:10 p.m. Sunday) in the regional semifinals next Thursday night. Game time is yet to be determined.

KU Sports Extra, On the Road: Wrapping up KU's run into the Sweet 16 by KUsports.com

A couple of days ago I was lamenting the poor performance of the Big 12. Looks much better now with 3 teams in the sweet 16 but not near as good as the ACC with 6. Wow.

I think they only have 15 teams in the ACC for b-ball.

I think Frank might be hurting more than we know. I would assume he would be the first option to guard Melo Trimble. Again, with the 08 team, and the Thomas Robinson/Tyshawn Taylor one, the one thing they had in common was few second chance shots on the offensive end. One shot and that was it. This team is getting there, but isn't there, yet. Landen's confidence is growing fast and we'll need all of that with Maryland's big front line.

I think so, too. Bill Self has a principle of not letting the opponent know what ailments our players have unless they're not suiting up. Last I heard Mason was dealing with a sore foot, sore hip, sore shoulder. Plus he looked like he didn't feel well. Let's hope he heals up before Thursday.

Didn't he get hammered a couple times in the B12 tourney?

You could sit Frank for most of the game, let Devonte take the point and keep Traylor in longer, that would compensate for MD's size, though it would take out an outside threat. He did have a couple of uncharacteristic turnovers, just losing control of the ball. If Brannen could just get going and make a couple of shots early, that could get MD out of their game early.

As hot as Svi has been in the last few games, he needs to be in there before Brannen, because Brannen Greene is the worst defensive player that we've had in recent memory and a turnover machine. He's got a beautiful shot as long as he can catch it and put it up but he hesitates to do even that anymore. It IS troubling to see the ACC being so dominant in what is supposed to be a down year, but I'm not surprised to see the three teams from the Big 12 in the sweet 16. Alot of experience between the 3, although I am a little surprised that Texas and West Virginia didn't do a little better than what they showed.

The three Big XII teams left all have a path to the FF. For ISU they have to face Virginia which is tough, but with MSU out their Elite 8 foe will be a lower seeds. Texas A&M might be a tougher matchup for them then the Duke/Oregon winner. Kansas really has the toughest path with having to face a Maryland team that seems to be getting back on track, and a Nova team that was #1 in the country until a couple weeks ago.

I expected Texas and Baylor both to go down. I thought that WVU would advance, but West Virginia had a very tough draw with SFA. Before the brackets were released I had noted SFA as a dangerous team and likely a sweet 16 sleeper pick. They were stuck on a 14 line in ESPN's Bracketology for the past month. I don't see how a team goes on a 20 game win streak and doesn't go up a couple seed lines. I would have picked them to advance had they been playing any other 3 seed but WVU. Turns out I underestimated them. They should have beaten Notre Dame, too.

We had some bad match-ups.

While 6 is a record number, there is little difference % wise.