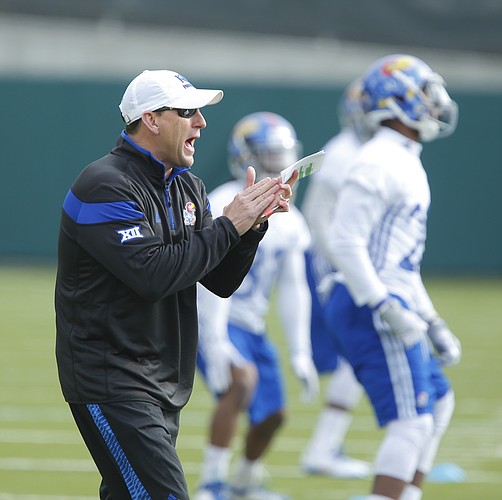 The Big 12 crew over at ESPN.com recently talked to a bunch of different Big 12 football coaches to get the inside scoop on how each program is perceived by the rest of the conference. The full story will appear in ESPN's College Football Preview Magazine and, for Insider subscribers at this link.

It's a very cool idea and even cooler to see that so many coaches cooperated. They did so anonymously, of course, but that cleared the way for them to be brutally honest and hold nothing back.

It's under the Insider tag on ESPN.com so in case you're not an ESPN Insider member, here's a quick look at the three things said about David Beaty and the Kansas Jayhawks heading into Year 2 of the Beaty era.

Believe it or not, they're pretty kind and encouraging.

Coach David Beaty's winless debut wasn't a surprise, but it also couldn't have gone much worse, beginning with dropping a 41-38 heartbreaker to FCS South Dakota State in the season opener. Coach, can you talk about the state of the Kansas program?

"He took over a disaster, but I think he did a good job. They'll get some guys, but it's going to take a long time. They have to give him some time. He's going to need about eight years to get that program right. And it's not easy up there." -- Big 12 head coach

My thoughts ---> This was by far the biggest thing that stood out to me. Eight years is a long, long time and KU hasn't been able to get a coach to complete three years since Mark Mangino went eight seasons from 2002-09. The truth here is that eight years could be right. So often you hear people talk about giving a coach 5 years, but it truly could take eight years (seven more) for the KU program to be established and competing on an annual basis. That said, it's entirely possible, perhaps even likely, that the first signs of becoming competitive could show up much sooner. The eight-year mark shows just how in touch the rest of the conference is with what Beaty inherited. It's not as if these guys with huge egos who have done a good job elsewhere are acting like they could turn KU around in a year or two. They see it for what it is and, although that's not going to lead to any sympathy on Saturdays, it has to help Beaty and company feel like they're doing the best anybody could. Time will tell if they actually get it done.

The Jayhawks can be an unexpected test in Lawrence, despite a 2-20 Big 12 home record over the past five years. Baylor, TCU, Texas and Oklahoma State have all barely escaped with single-digit wins. Coach, can you talk about facing the Jayhawks on the road?

"They're spooky. Unless you're Texas, Oklahoma or Baylor and you can go up there and overwhelm them athletically, you kind of have to watch it with them. You can go up there, they'll have like 20,000 in the stands and they can get you." -- Big 12 head coach

My thoughts ---> This, at least right now, is the biggest compliment the KU football program could be paid by an opposing Big 12 coach. Nearly half the league has experienced this first-hand, so it's no surprise the ESPN guys found a coach who would admit this, but just as many have come into Lawrence and destroyed Kansas during the past six years. Cool of someone to actually call it like it is and admit that, as down as the program is right now, KU can get you if you don't show up.

Kansas nearly pulled off the upset of the year, falling at TCU 23-17 in mid-November. The Jayhawks' tightest conference loss was a sign Beaty has his young players buying into his energetic approach. Coach, can you talk about how it's even possible to turn this thing around?

My thoughts ---> Nothing earth-shattering here, but, to me, this is further proof that the path Beaty and company are on is a good one. They've put a big emphasis on recruiting good character players who are proud to sign with and play at Kansas. That's huge. Because if it starts meaning something to these players the way it did to Ben Heeney or does to Montell Cozart and Joe Dineen, then that'll increase the odds of a turnaround. There were flashes of teaching this group how to compete during the past couple of years and now the next jump is that teaching them how to win bit. That's going to be tougher. Especially in the Big 12.

Probably not any Iowa State coaches, the way they talk about "up there". Iowa State may be the most likely conference victim to KU for the next few seasons (not saying that KU won't beat someone else first, but that it will be more of a surprise if that happens. This is positive. I hope KU can get up off the mat and win 2+ games this year, then 4+ next year and then who knows? We need some wins to get supporters on board for the new stadium - I think it's going to take some wins before the wallets get opened.

8 years sounds about right. A full 4-5 year recruiting cycle just to get scholarship numbers to normal and second recruiting cycle to develop that depth. A good QB and competent OLine can mask a lot of the weaknesses on the rest of the roster.

I agree it's more than a 3-5 year "project". Beaty has to be given 2 full recruiting cycles to show if he is the coach to get this done. We as fans can't give up. If we show we have given up it shows that to the players and that's a powerful message. Football is where the money comes to keep athletic departments going in D1. Good luck Coach Beaty, staff and players. We're behind you all the way.

KU will do better in the Mountain West Conference. Right, Herr Doktor Zenger?

If we don't land in a P5/P4 conference, I'd rather be in the Big East.

So you want KU to play football in a conference that doesn't exist anymore?

Or just one that doesn't play football? (anymore)

Moron is what I say to Michael Lorraine!

It wouldn't take that long with a top notch DC.

Our guys can play -- but not including Defense for 5 years.

Why would a top notch DC come to KU?

We have a top notch DC. Maybe not a big name, but I feel he's top notch. Like the one coach said, you need guys who want to be here.

"Our guys" are unfortunately only 3/4ths of a team, which is equivalent to an FCS team. From that perspective, it was actually an encouraging sign that they played well against one of the best FCS teams.

Bottom line: Kansas only has about 3MM people. K-State has established a very successful football program over the past 20 years, and virtually every top recruit from in-state has either gone there or to a really big time program. There just aren't enough local recruits to go around. Add in the fact that Missouri kids h(Have Mizzou, Nebraska has UNL, Oklahoma has OU and OSU... it's hard.

Let's get a story up about the 4 star cornerback that just committed. You guys are late to the party once again.

Matt - Do you or any of the coaches have a realistic projection of the number of years before we have an 85 man roster of scholarship players? At one point, I was hoping it was going to be within 3 years, but sounds more like 4 or 5, especially if we lose players before their eligibility is up. At least the ones we're currently recruiting are making it on the field.

Eight years sounds about right. Remember, Turner Gill and Charlie Weis ran this program so deep into the ground and set this program so far back that there's no way the KU football program can even think about playing in a bowl game until the next decade. You could have put Nick Saban or Bill Belichick in charge of last year's team and they still would have gone 0-12.

I really believe we will be competitive in 4 years and on the ground running in 5. You can only have one of each class. RS fr, fr., soph., jr., sr. 5 classes. We have been playing 18,19 yr olds against teams with full classes of each level.

Once we have a full list of bullets, we will compete and never look back with this staff. Big problem we will have is keeping Beaty after 4,5 years.