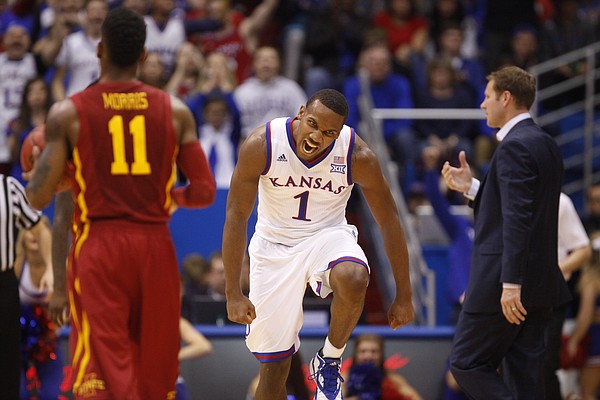 Kansas guard Wayne Selden Jr. (1) roars at the Jayhawks' bench after hitting a three against Iowa State during the second half on Monday, Feb. 2, 2015 at Allen Fieldhouse. by Nick Krug

Jump with me, for a minute, into the mind of Wayne Selden to see why not getting drafted might actually wind up being the best thing that could have happened to the former Jayhawk’s chances at a pro career.

Selden, as you know, has always been the type of player who seemed to perform best when he had something to prove, someone to prove wrong or a chip of any size on either of his shoulders.

Occasionally, things got so heavy during his KU career that Selden found himself carrying rather large chips on both shoulders. Almost without fail, every time that happened, Selden performed his best.

Although the former KU guard started 108 of the 109 games Kansas played during his three seasons as a Jayhawk, consistency often was an issue for Selden. He would take us to the mountain top and show elite-level skills, but rarely hang around long enough to enjoy the view and often found himself near the base again, climbing back to the top almost as quickly as he arrived in the first place.

Case in point: Selden responded to his stellar 33-point, 12-of-20 shooting game against Kentucky by hitting for just 10 made field goals in his next four games combined. Rarely did this hurt KU’s chances at victory — a credit to the rest of the talent Bill Self put around Selden — but it did certainly hurt Selden’s chances at becoming a true standout whom NBA teams would want, perhaps even need, to draft.

So here we are, one day after the biggest day of Selden’s life and he’s looking for a team to play for. Sixty picks came and went without Selden hearing his name called on Thursday night, and now, in order to live out his NBA dream, the former KU guard is going to have to go the free agent route, impress a team or two during summer league play and make a roster the hard way.

He must be so happy.

See, Selden has all of the physical tools necessary to play in the NBA. He’s a damn good shooter, he’s got great size, good quickness, he’s strong and he’s athletic. Put him in the right situation and he’s a ready-made rotation guy off the bench.

NBA teams might not know it yet, but, by not drafting him, they did exactly that, as the right situation for Selden is way more dependent upon what’s between his ears than it is the style of play of this team or the personnel of that one.

Today, Selden is pissed. Not just because he didn’t get drafted, but also because of some of the other players who did. Throw out the Europeans because they’re here to stay and college players are just going to have to get used to that group eating up 15-20 of the 60 available draft spots year after year. Heck, it’s already been happening for years.

But there were at least a few players taken near the end of the draft who I know Selden believes he’s better than. Think Iowa State’s Abdel Nader or even his former AAU buddy Georges Niang. Think UConn’s Daniel Hamilton, Oklahoma’s Isaiah Cousins, Carolina’s Marcus Paige or Maryland’s Jake Layman.

There’s no doubt in my mind that Selden respects all of those guys, but I also would bet a pretty penny that he believes he’s better than every one of them.

So to give him that kind of fuel to go along with that undrafted tag seems to be a perfect storm of sorts.

It should be fun to watch him in summer league games this month. I’m guessing we’ll see the Selden that more closely resembles the South Korea version than the one who occasionally disappeared during the other portions of his Kansas career. 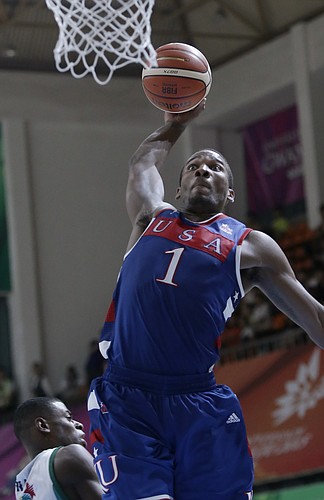 Good analysis and positive attitude. Can't argue with anything you say, Matt.

I'm not sure it's a strong recommendation to point out that Wayne only plays great with a chip on the shoulder, or thinking he has something to prove. That can translate to a pretty big shortcoming on the psychological front for the GMs who already passed his name by twice.

He simply needs to 'Bring It', all the time, in the summer league!

I think the real reasons behind Wayne's struggles isn't his drive, attitude or confidence. I believe it's his knees the guy is 6ft 6in and 240lbs and he's had bad wheels since he came to KU and he had a surgery right before the draft if I'm a NBA exec he scares me. I watched him all season and his lift on jump shots, explosiveness and quickness were never consistent, one minute he's flying down the court dunking on guys the next he barely gets enough lift on a 3 to hit the front of the rim.

The only time he looked like the athlete he was touted to be was last summer in Korea. I completely agree, Creg, and I think that's why Wayne decided to go pro. He knows his window is shrinking at a faster rate than other athletes.

I concur. I mean think how inconsistent he was when we were Big 12 play. I think he's got a shot to play in the league, but I have a hard time seeing him blossom to a star. IF he can be quick enough to cover 2's and 1's in the league (a big if), I think he'll stick around. If not, he'll likely only get a cup of coffee. My guess is he'll play professionally until his knees finally give out. Let's hope it's down the road.

A point was made yesterday that if Wayne would have stayed would we have not gotten Josh we will never know but the odds increased when Selden left . Another thing to factor in was Waynes mother who moved to Lawrence no longer wanted to be in Lawrence so Wayne to appease her may have felt pressure to declare. Wayne came in a OAD but never reached his potential and now has to prove himself all over again .