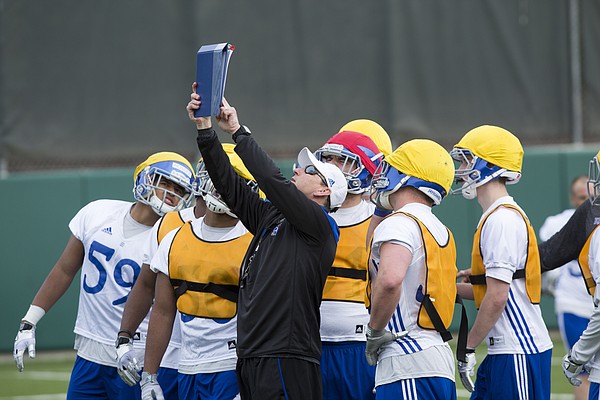 Finally, the Kansas football team may be catching a break.

It’s been a rough six seasons for the Jayhawks, who have piled up losses at a record pace since enjoying wild success under former head coach Mark Mangino. And there’s no doubting that in order to crawl out from under the mess the Jayhawks could benefit from a helping hand.

That’s exactly what they’ll get in 2016, according to FOX Sports writer Bruce Feldman, who ranks the Jayhawks’ 2016 non-conference schedule as the second easiest among Power 5 Conference football programs.

After tallying it all up, KU’s non-con schedule strength index number came in at 1.83, tied with Washington for second lowest and just .02 behind Boston College, which claimed the No. 1 spot.

Feldman likes the way things set up for KU during its first three games before the grueling Big 12 schedule, with a pair of home games against Rhode Island and Ohio and a trip to Memphis that became a little bit easier to swallow this offseason, when former Memphis coach Justin Fuente left for Virginia Tech and several seniors exhausted their eligibility and followed him out the door.

"The Jayhawks have a great chance to start the season with a win by opening at home against woeful URI, which was 1-10 in 2015. After that, Ohio, which has only 11 starters back, visits, followed by a trip to play a rebuilding Memphis team that not only lost its star QB but also its head coach and has only 12 starters returning."

Earlier this summer, though not as high, I also saw ESPN ranked KU's non-conference schedule as the eighth easiest among Power 5 programs. 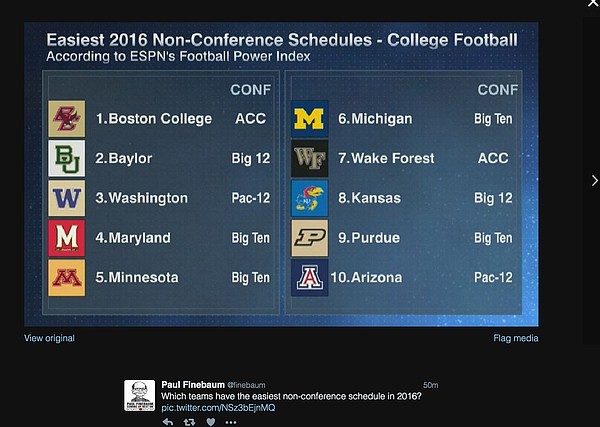 Clearly, the mere thought that KU may have a couple of easy games in the early going qualifies as good news for the Jayhawks. But if there's one thing KU fans have learned during one of the roughest stretches in college football history it's that nothing comes easy and easy definitely is a relative term.

Still, having a schedule that people don't deem one of the most difficult in the country, which has been the case during a couple of the past few seasons, should give KU hope that the turnaround could begin sooner rather than later.

Really, though, this fact qualifies as both good and bad news. Good because it gives KU a chance. Bad because if the Jayhawks stumble against this group, they won't really have any excuses.

That's not to say anybody should expect Kansas to be 3-0 after the non-con portion of the schedule passes on Sept. 17 — 2-1 would certainly register as a fantastic start and, according to Vegas and many college football analysts, 1-2 is the more likely result.

But momentum can be a funny thing. And if KU can get that first one against a woeful Rhode Island team, the Ohio game the following week looks a little more attainable and things can build from there.

The whole thing adds intrigue to something that KU fans already are keeping a close eye on anyway — how quickly can second-year coach David Beaty get things back on the right track and when will Saturdays at Memorial Stadium start to be fun again?

If I'm a KU player, I'm watching every Ohio game from last year about 5 times over the summer. By the first day of summer practice, I know them as well as I know my own team. It's a winnable game, it puts you over the Vegas projections and it lays the groundwork for the first road victory since the Beatles recorded Abbey Road.

And, by the way, this is what our non-con should look like for the next 5 years minimum. If we fall out of the top 10, someone needs to lose a job.

I think we turn a corner this year. Not THE corner....a corner. Like 4 wins. Like football being fun again. Maybe not as fun in a couple of them, but much more fun than recent memory. I'll certainly take that.

Long live the percentage wheel!!! I like it. Wish I would've thought of it first. I might steal it for a blog down the road!

Number two is okay but still too difficult. Does DeVry have a football team?

Hey look KU went 3-9, that means that they are making progress?

If you beat nobodies and lose to the Big Boys that's not progress. Just a meaningless win.

What's actually sad is that we have the same stupid approach by some fans when it comes to KU football. Look at the list: 4 of those teams went to bowl games last year. Two of them finished with 7-6 records because they qualified for bowl games.

Additionally, KU is very thin on numbers, which means we need every advantage we can get until the roster is full, the recruiting is full tilt and we've made some real progress.

The buffoons who want to puff out their chests instead of think their way through the problem are actually a big part of the problem with this program. Bill Snyder got it. Too bad that you don't.

So Einstein er Brett so your fragile KU ego will be soothed if they beat the worst teams they can find just to say they won a football game? Their noncom schedule the next few years is a joke lm not saying schedule Alabama but would you have felt better if KU beat SDSU last year but still lost and played as poorly as they did the rest of the season. Your childish name calling as an argument doesn't come off as smart either.

I think what Brett is saying is getting wins are important for rebuilding the program, even if they're against crappy teams. I get what you're saying that if you load up on crappy teams and beat them it doesn't matter. But to a team that went 0-12 last year, I don't think it matters who they beat, as long as they beat someone. At this point in the game, it's about baby steps. Our football program was in shambles when Beaty took over and it'll take some strategy, recruiting, and top notch game planning for us to even beat those crappy teams. I just want to see KU win. I don't care who the hell they play, I just want to see some wins. Then once we can win some conference games, beef up the non-con schedule a little.

Valid points John and yes l agree short of a Harbaugh or Sabban no one could have an instant turn around after Gil and Weis but l would hope progress is seen in conference wins we need to beat the weaker conference teams then set our sites on moving up to the middle of the pack teams. I get a win is a win but even playing SDSU last year didnt guarantee anything with this team.

A few cupcakes in the non-conf is standard for most teams. Should they have the softest non-conf for 5+ years? They'll have a new coach if that's the only way they can win.

They've played in 10 bowl games, won 5 and been ranked in 10 seasons since Abbey Road was released. I guess they didn't win any road games...The idiotic comments some people make.....

To the guy belittling SDSU, maybe you should do some research and see how they did last year and what quality they actually were. Their friends NDSU beat KSU recently and they are not very far behind NDSU. They were a good FB team. Period!

Lol yes sdsu had a good year but KU scheduled them because they thought that could be a win. Duh. Genious

So a win against Rhode Island but we get blown out in the Big 12 schedule yeah some recruit is going definitely want to play here. Dumb argument

Kevin. I'm sure you want to seem like you're making intelligent points. Here are some suggestions to assist you.

1) There's a reply button. Use it. Otherwise you seem like you're playing with yourself. Nobody likes to see that in public.

2) Spelling and grammar matter. We all make little typos, especially on our smartphones, but some effort to communicate intelligently augments your ideas. You're not a 4th grader, are you?

3) Don't be a chicken little. If you have nothing but criticism, you look like a moron.

Wow Jay you are so whimsical . If you actually want to debate the point of topic ok but 3rd grade jokes aren't funny from an adult and I use that term loosely.

So if my opinion differs from yours lm labeled a moron. Pot calling kettle.

I didn't express an opinion that had anything to do with yours....The "point of the topic"??? is that the Non-Conf schedule is soft. It is.You agree? Disagree?

You labelled yourself a moron. I was trying to help you. Sadly, you seem comfortable in that role.

I hope Kansas gets a win so you can feel better about yourself since your self esteem hinges on how many they have. Let KU have you schedule future games so you can feel good since progress to you is a win no matter you against.

Kevin, you poor thing. Do you even read the comments? Can you read? If anything, I more or less agreed with you.

I was simply commenting that you might get more respect if you communicated more effectively.

You and Brett seem to disagree. Argue with him. You're intellectual and emotional equals. Have fun!!!

Thank you. Be sure to give your mommy a big kiss on the cheeck for typing your replies.

Thanks for making my point. Say something else stupid just to reinforce it a little more...c'mon, you know you can. Brett would.

I get your point Kevin but I think the 9 games we play in conference will be more than enough strength of schedule. Wins, even if against weak opposition IMO will be more beneficial to the development of this program than losses that at best can only produce moral victories. We are easily the worst P5 team in the country and probably close to the worst D1 team in the country so regardless of who we play they have to be considered a formidable opponent. After and 0-12 season I think the players would rather have an actual W to show for their efforts.

In some regards l do agree Michael but is a win any win going to resonate if we beat say Rhode Island and then go 1-11? By the end of the year it wont matter. I just wish they could be competitive the efforts against TT TCU last year was more encouraging then a win if they had beaten South Dakota St. I dont think a soft noncom matters just to pad record. Some on this board say more wins better recruits.....really? Look at the recruits who just gave verbals in the last week does that mean that they will be around in Feb who knows. All l hear these kids talk about was how comfortable they are with the coaches the area the school educational opportunities. I would be more impressed if we had beaten Rutgers (terrible yes) or Memphis. Maybe one cupcake like last year oops lost to supposed cup cake. But put in a Rutgers Indiana Purdue San Diego St Oregon St. I know a lot of Power 5 schools called to try and get KU on their schedule l dont know what happened with the Alabama game last year. A win is a win yes l agree but l know the team is down and Big 12 schedule is hard enough.