Addition of Thornton, Newman would improve Jayhawks even during red-shirt seasons 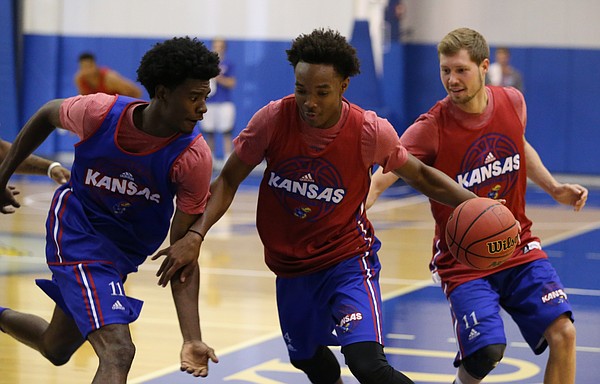 Watching Kansas guards Frank Mason (blue) and Devonte’ Graham (red) get after each other again during Wednesday’s camp scrimmage took my mind to a wild place that I think KU fans would love to go.

We all know by now — and have for some time — that both Graham and Mason will start in the backcourt again in 2016-17 the way they did so successfully last season. Having those two on the floor at the same time makes up KU’s best lineup and having the luxury of having at least one of them out there at all times, in case one needs a breather or the other is in foul trouble, gives KU coach Bill Self a sense of security.

As much as it’s a great thing for them to push each other in practice the way they showed at moments during Wednesday’s scrimmage is critical to KU’s success but they also have to spend the bulk of their time in practice playing together. That leaves the challenge of pushing them, both offensively and defensively, to the rest of the roster and, though the effort from the reserves is always equal to what Mason and Graham put out, the talent and skill is not.

Imagine for a minute, though, if it were. Imagine for a minute that KU had a couple of guys on its roster that were elite-level prospects who, every day, could push Mason and Graham in every way and get the most out of them while preparing them daily for what they’ll encounter during the upcoming season.

Believe it or not, such a scenario may actually be possible thanks to Duke transfer Derryck Thornton and Mississippi State transfer Malik Newman both seriously considering coming to KU.

If both players — or either — joined the Jayhawks, they would have to sit out the 2016-17 season in accordance with NCAA transfer rules. But they would be able to practice and they would make up a heck of a “red team” backcourt that would push Mason, Graham, Josh Jackson, Sviatoslav Mykhailiuk and the rest of the KU regulars on a regular basis.

The idea that Newman and Thornton are considering Kansas obviously is exciting for the future of Bill Self’s basketball team. Both would challenge for starting spots immediately upon gaining eligibility and, depending on how long they stuck around, each could wind up being a huge part of future Kansas teams.

If they do come to KU, even while waiting to play, their impact could be just as important during Year 1 as it could in Years 2 and 3 because they would elevate practice to a higher level and give Mason and Graham Big 12 and NCAA-Tournament-style competition on a daily basis.

Decisions from either player could come any day now and I saw at least one report on Twitter today that indicated that both really liked Kansas but had not reached the point where they were a packaged deal.

From what I've heard, KU has a great shot at getting both of them and while they would certainly push the current Jayhawks throughout the upcoming season, the opportunity to be challenged by players like Mason, Graham and Jackson also would improve their games a great deal while they waited for the 2017-18 season to roll around.

Stay in touch with KUsports.com for the latest information on both decisions.

The only worry I have about any elite prospects transferring to KU is after their year off with training from Bill Self, would be them bolting for the NBA

Neither would leave after a redshirt year. There's a reason why neither entered the draft and without being able to improve their stock in games, their draft stock would plummet.

Maybe Matt Tait could shed some light on this?

I don't think there's any such rule. I just asked around and I'm pretty sure all that matters is the age limit... 19 or a year removed from your senior year of high school.

So, even though it would be rare, Newman or Thornton definitely could come to KU, practice for a year while sitting out and still enter the 2017 NBA Draft.

Thanks for clarifying, Matt.

Both deciding on KU would probably force 2017 recruit, Trae Young from Norman, OK. to look elsewhere?

There's no doubt that it could have repercussions down the road, but it might be worth it to get players of this caliber. I'm sure, if anyone could, Self could figure out how to piece it all together...

Wow 3 players redshirting due to transferring would leave only 10 with scholarships. Josh players can enter the draft one year after high school so even with a transfer they could enter. As for Young he is on the list of top schools so his decision will be based on where he wants to play. Self would be foolish to not recruit because of Young and his decision.

Add to that Svi or Vick guard Jackson and that some intense backcourt practice.