How difficult is the Kansas football job? 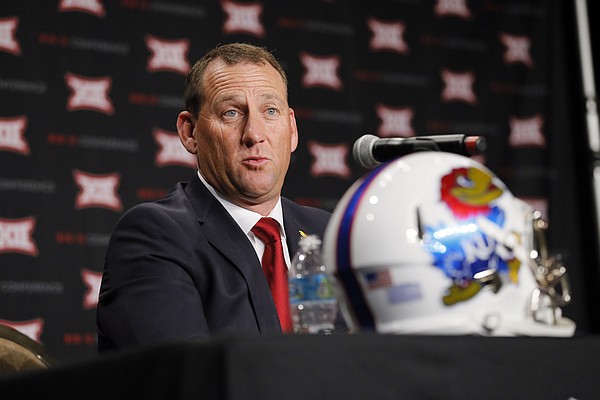 During the past few decades bigger, taller, meaner, older men and all kinds in between have tried to tackle the job entrusted to second-year Kansas football coach David Beaty.

And very few of them have succeeded.

So just how difficult is the Kansas football job?

Beaty was asked that question — and dozens of others — Monday at Big 12 Media Days in Dallas, and, like with most things, the KU coach gave an honest and enthusiastic answer.

“You know what? It is a difficult job,” Beaty said. “But all these jobs are difficult. But I tell you what, it's a great opportunity. We know where we are headed and our players do as well. I can't wait for you guys to hear from those guys because I think you will hear in their voices, they know where we're headed.”

Unlike a year ago, when Beaty spent a good chunk of his time on the podium subtly pushing the recruiting angle, this year he talked more about concrete proof of progress, the process and what his players have done during his first year in charge.

No one can say Beaty was pleased with the winless season and the final record, but there were elements of that first season that made him happy.

“For us to go through a season that we went through, if you would have come to that last practice before that last game you would have never thought we hadn't won a game,” he said. “That was probably what I was most proud of. Our guys worked and enjoyed everything they did with regard to development. They know where we are heading and they can see the future.

“Is it difficult? Yes, but every job is difficult, doesn't really matter where you're coaching, everything has their own unique set of characteristics that make it difficult, but there is a lot of great things about 'em, too, and there is a lot of tremendous support at KU. They want to win. They give us what we need. We're finishing up a $2 million renovation and our fans want it and they know it's coming and our guys know it's coming, too.”

Glad to see the Coach and Players are united and want to be better. I hope they can improve and there setbacks are over. Winning a game will make all their problems go away. Good luck for this upcoming season.