As we continue to climb toward the top spot in this year's Most Crucial Jayhawks for the 2016 college football season, we run into the fourth offensive lineman on our list so far at No. 8.

KU's offensive line, which OL coach Zach Yenser said back in June was starting to play with that mean streak that all good offensive lines need to have, will be under the microscope again for this young offense in 2016.

Regardless of who's taking the snaps, running the ball or catching the passes, the offense figures only to go as far as the offensive line will take it. That's why so many linemen have shown up on this list already and that's why entry No. 8 figures to have an important role no matter where he plays or how often. 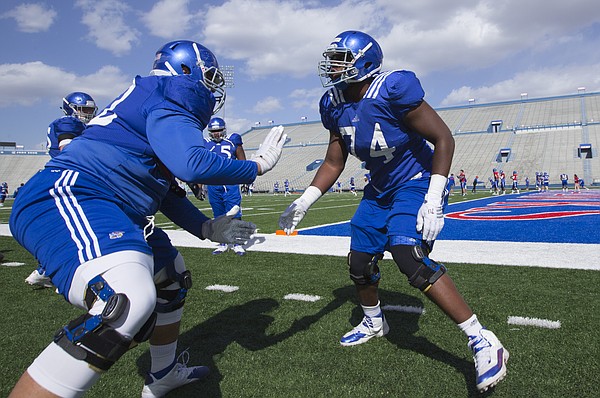 Whether he wins the job at left tackle, where he is battling returning starter Jordan Shelley-Smith, or is beaten out, the second-year Jayhawk will have a huge role on this team in 2016 — and beyond.

Last season McCauley made three starts along the O-Line and played in six games as a true freshman, giving him the valuable experience that sometimes does not arrive until a player’s second or third year on campus.

Not all of McCauley’s time on the field was memorable or even mentionable, but he held up well enough to keep trotting back out there.

There’s no doubt that what he experienced while facing some of the bigger, stronger pass rushers in the conference, along with what was taught to him by his coaches and teammates helped McCauley make it through his first season of college football, and he almost certainly used that information this offseason to better prepare himself for Year 2.

KU coach David Beaty recently said that McCauley and Shelley-Smith were in a too-close-to-call type of battle for that starting spot. But, with preseason camp yet to begin, it’s what they will do in the next few weeks that will determine who starts and who does not.

Even if he does not get the nod, McCauley will have value on this team as a swing tackle, joining Larry Hughes in providing depth behind Shelley-Smith and new right tackle D’Andre Banks.

If McCauley, 6-foot-5, 307 pounds, is like most of his teammates and transformed that freshman frame into a leaner and meaner version in the offseason, both his footwork and stamina should be improved, giving him a chance to be more explosive both in the run game and pass protection.

The Jayhawks absolutely need their offensive line to hold up this season if they hope to be competitive or push for a couple of victories. And while McCauley’s most exciting days might still be down the road, he will be given every opportunity to be a part of that line again in 2016, a year older and wiser than he was during his first try.

5 of the remaining 7 seem obvious:

Good thought, hadn't really considered who was still coming. How about a placekicker? I'd definitely put that in the top-10.

Willis should be #1 but you know that Tom and Matt are going to try and be cute and put an OL up front.