As we jump into the Top 10, it's offense that's up first.

In fact, 7 of the final 10 in this summer's list of the Most Crucial Jayhawks for 2016 come from the offensive side of the ball, lending support to the claim that it's the KU offense that has the most room to improve and needs to elevate its production to something that more closely coincides with the rest of the Big 12.

In David Beaty's Air Raid offense, there are plenty of ways to get that done, but few are as important as through the air. The Jayhawks have a deep and talented — but still green in a lot of ways — group of receivers and one of those with the greatest potential comes in at No. 10. 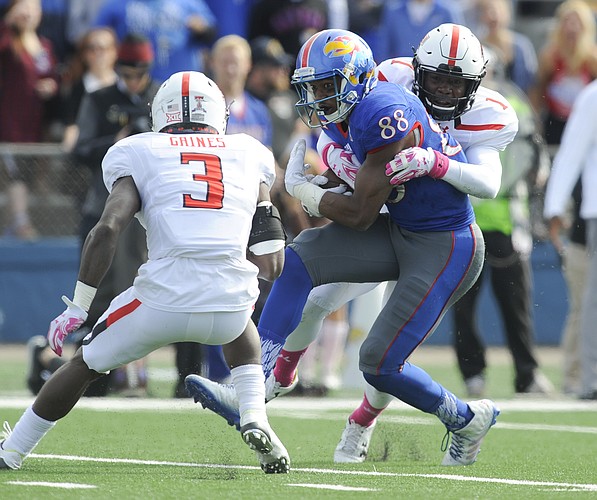 Kansas wide receiver Jeremiah Booker (88) is wrapped up by Texas Tech defensive back Nigel Bethel (1) and defensive back J.J. Gaines (3) during the second quarter on Saturday, Oct. 17, 2015 at Memorial Stadium. by Nick Krug

An injury that kept him out for most of camp and a good chunk of the 2015 season severely limited Booker’s productivity, but there’s no denying the impact he made when he was on the field.

The long, tall, big target who showed up for fellow-freshman Ryan Willis down the field made in some tight spots made a few tough catches and finished his freshman season fourth on the team with 23 receptions and 228 yards in just six starts.

Imagine, then, what Booker could have done had he never been injured and been able to (a) compete at a high level immediately and (b) develop a better rapport with KU’s QBs more quickly instead of having to wait until the midway point of the season to get his legs under him.

It seems safe to say that his numbers easily could have doubled, which would have produced one of the better years by a KU wide receiver in recent years.

Fast forward to 2016, when you find a healthy, leaner and stronger Booker who no longer seems like a freshman trying to figure things out. Even though he looks slightly smaller, Booker said he dropped all of his bad weight this offseason and was moving better than ever. He worked hard this offseason on his route running and footwork and figuring out how to maneuver at his new playing weight.

If that translates into being a little faster — whether that’s straight-line speed or just perceived speed because he’s in and out of breaks quicker — then Booker could be poised for a big sophomore season and could be in line to give the Jayhawks the much-needed second or third weapon in the passing game to ensure that opponents can’t just key on junior transfer LaQuvionte Gonzalez game in and game out.

Whether the results come remains to be seen, but there’s no doubting that Booker will put in the work. He’s a great young man and a great teammate who puts the good of the program above any personal goals and, according to teammates, is easy and fun to be around. Because he is so polite and kind, he often comes across as quiet upon first meeting, but teammates and coaches say he’s one of the funniest guys on the roster and can really get people going when he’s on.

All KU fans need is for Booker to be “on” on Saturdays this fall. If he is, it will go a long way toward helping this offense climb out of the rut it has been in during the past six seasons.

I'm recalling an article from early in camp last year predicting that Booker would have been a starter - before the injury. There are a lot of young players that should be growing into D1 players. Freshmen to sophomore is usually the biggest jump, so there is hope.