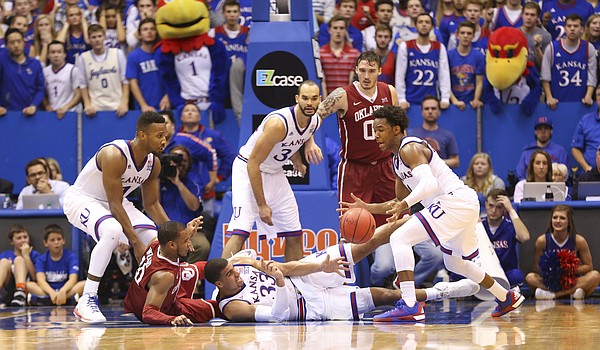 Every so often, the stars align, one's path becomes clear and a magical moment appears before them.

The origin for Taylor attending what many people are openly calling the greatest game in Allen Fieldhouse history dates back to Christmas, when her brother, Todd Mathews, surprised her with tickets to a January game against Oklahoma at Allen Fieldhouse. The timing of the gift, which was actually for her birthday — midnight the night of the game — gave Taylor time to clear her schedule so she could make her first ever trip to Allen Fieldhouse.

Both siblings knew then that the Big 12 clash would be a good game because the Sooners and Jayhawks, but there's no way either of them could have predicted it would be anything like it was.

“I've always wanted to go to a game,” said Taylor, a Topeka native who has lived in Overland Park for years. “But mostly with my brother. So when he moved back home after 15 years of living on the east coast, we talked about all of the things we needed to do to catch up on being brother and sister and going to a game was at the top of the list.”

Already overjoyed about her chance to final see the inside of Allen Fieldhouse, or, “walking into that church everybody talks about,” Taylor's excitement only grew in the days before the game when it became clear that KU and OU would square off as the No. 1- and No. 2-ranked teams in the nation.

Sitting in her seats, with one of the greatest games in recent memory unfolding in front of her, Taylor could not help but marvel at how lucky she was for THIS game to have been her first and on her birthday, no less.

Asked how the experience compared to what she envisioned all these years, the birthday girl who has spent most of her life working weekends, which made it hard to get to a game, explained with three short words: “It exceeded it,” she said. “It was so cool.”

Her favorite part of the 109-106, triple-overtime thriller — other than the KU victory, of course — was getting to watch two great teams play at such a high and intense level for so long. “I just loved how hard both teams fought,” she said. “It was dog eat dog out there.”

Not long ago, as the Kansas City Royals were wrapping up the regular season and beginning to make their push toward the franchise's first world championship since 1985, Taylor thought she had hit the jackpot by taking her brother to one of KC's final home games. This gift, however, far surpassed that and now Taylor is looking for a way to one-up her brother somewhere down the road.

“I'd love to go again,” she said. “But I doubt anything will ever equal that, especially being there with my brother and the noise in there. It was so loud. My brother's not going to be able to top this gift ever and now it's up to me to try to outdo him.”

Thanks Matt for article. Once in a lifetime event for sure!! #FOE

Glad you enjoyed it and congrats on having that gift work out so well for you! Enjoy the rest of the season.

I love this article. Has "feel good" written all over it. For once, we commentators will not analyze, overanalyze, or attempt to one-up our cohorts in the comments section following a story. Sometimes it's just about being thankful to be fans who are lucky enough to enjoy this basketball team. This story underscores that.

I thought it was a pretty cool deal and unique, too. Not many people are lucky enough to have their first KU game be that incredible and coincide with their birthday, as well. Worth sharing. Glad you liked it, Joe.

Oh, stop drinking the koolaid, Joe! Couldn't it have been a post-season game? Or, if it was only held one day later it would have actually been on her birthday. That would have made it even more special. But then it wouldn't.....

Great story. Reminds me a little of my lucky friend who went to Cal and experienced only one football game live in his entire time there: the one that ended with the most famous play in college football history (with Cal winning on all the laterals and ending up running into the Stanford band member).

Congratulations to Jamie Taylor and Todd Mathews: what an experience to treasure!

I was in Norman, Oklahoma, two days after the game talking with some newspaper people there at the Norman Ledger. None of the group were sports reporters, but everyone there was talking about it focused on what a great game, and of course, on the great player Buddy Hield. They seemed to hardly care the Sooners lost. They all thought the game was very cool for both teams and the Big 12. One thing of note in the conversation, (none of the group had ever seen a game in Allen) was a comment by Dicky V during the broadcast, mentioning it was the loudest crowd he had ever heard at a college game. The group were referencing the comment as another Dicky V hype exaggeration. I had to inform them the TV coverage somehow filters the sound, and while you can tell the crowd is loud, you can't really tell just how loud it gets through the TV. I told them I have been there at big games when KU has stormed back from deficits (last year against Baylor was one) and I assured them it is louder than anything they could ever imagine. I have been in Lloyd Noble in Norman, unfortunately when KU was getting beat, and they get pretty loud and rowdy. I can assure you, it is nothing in comparison to the volume at Allen Fieldhouse. .