KU-OU delivers 1.9 overnight rating; So what does that mean? 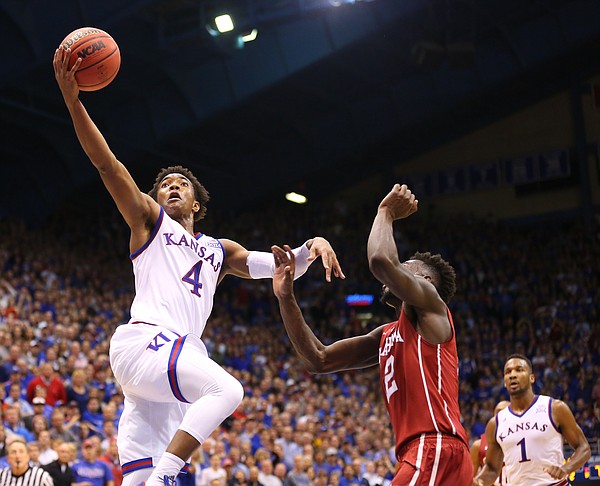 Kansas guard Devonte' Graham (4) gets a foul from Oklahoma guard Dinjiyl Walker (2) during the second half, Monday, Jan. 4, 2016 at Allen Fieldhouse. by Nick Krug

According to ESPN, KU's 109-106, triple-overtime thriller over Oklahoma came back with an overnight rating of 1.9, making it the highest Big 12 Big Monday game on record since the network started keeping track in 2002.

That certainly should come as no surprise given the fact that Monday's showdown was a clash of the top two teams in the polls played on a night that has become synonymous with thrilling college basketball.

What's more, even those people who did not shape their entire night around the game — no one around here, of course — surely felt compelled to tune in when they heard No. 1 vs. No. 2 was headed to overtime or double overtime or perhaps even triple-OT.

I've never really tried to understand what the ratings are all about all these years. I've just trusted that the people who are sending out that information know what they're talking about and when they say a number like 1.9 is high, I believe 'em.

But this game. This epic game that still will be talked about decades from now, piqued my interest so I made a quick call to inquire what the rating means.

Here's what I got:

According to Nielsen, which keeps track of the ratings, there are 123.2 million viewing households in the United States. When they say that the game received an overnight rating of 1.9, that simply means that 1.9 percent of 123.2 million — or roughly 2.34 million — households watched last night's game.

A KU administrator I talked to about the ratings explained that while the ratings are not an exact science they are detailed enough for Nielsen to confidently say that 2.34 million households actually watched the game. So this isn't just a situation where someone who was channel surfing got credit for watching the KU-OU game even when they were only on ESPN for about 3.2 seconds.

The administrator told me to view the ratings kind of in the same way we view political polls. They're far from exact but they give you a pretty good indication of the overall landscape and viewing statistics.

In addition, I was told that the game likely peaked with a rating of 2.6 but did not stay there long enough to pull the overall number above 1.9. I'm guessing that's because a ton of people tuned in for all or part of the overtimes.

Here's a little more: Last night's game delivered a 16.79 rating in the Kansas City demographic, the highest for a KU game since the Jayhawks and Kansas State Wildcats squared off on Feb. 11, 2013.

Curious who else was watching the game last night?

Here's a quick look at the Top 5 markets that tuned in.

What's more, it was the highest-rated regular season game in Oklahoma City demographic since Texas-OU in 2009.

Clearly, those who tuned in got their money's worth and although the 1.9 ESPN rating might not put KU-OU in the same context as popular sitcoms MASH or Cheers in their heydays, putting the game in the context of Big Monday and college basketball shows you precisely just what a big time event this was.

Not that you needed a television rating to tell you that.

2.4 million people watch a college game on a Monday in January is big. Fox's "Superhuman" from 7-9PM got 3.6M.

More people in New York watched than in Oklahoma City??? Glad I could contribute to beating Oklahoma here as well! ;)

Think of how many more PEOPLE there are in NYC, though...

Does anyone know how the rating compares to other big college regular season games like Duke/NC or even a NCAA game?

I wonder many of us watched over here on the armed forces network (AFN)? I think I was yelling loud enough for half the desert to hear ROCK CHALK!

Thank you for your service!