The Day After: Quieting Kentucky 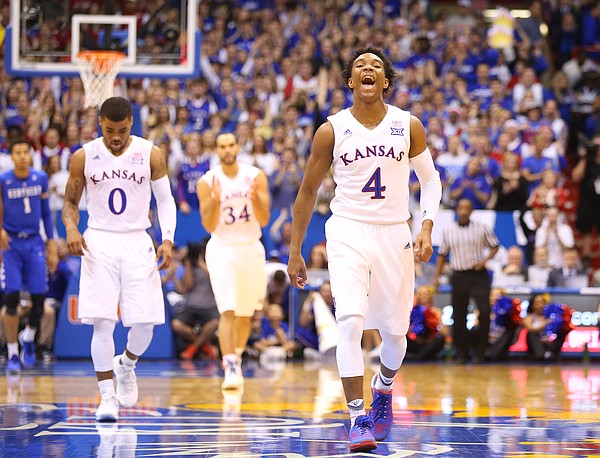 Kansas guard Devonte' Graham (4) flashes a wide smile as the Jayhawks begin to close the gap during the second half, Saturday, Jan. 30, 2016 at Allen Fieldhouse. by Nick Krug

Although neither team played a perfect game, the Saturday showdown between Kansas and Kentucky as part of the Big 12-SEC challenge did not disappoint.

Big time players came up with big time plays and the Jayhawks and Wildcats went to overtime in a wild building, where Kansas outlasted UK, 90-84, behind the strength of Wayne Selden's 33-point night.

Selden wasn't just good in this one. He was great. And if he hadn't been, Kansas might have lost by double digits. With Perry Ellis on the bench and struggling to find any rhythm offensively, KU leaned heavily on Selden's hot shooting and the junior guard delivered time after time.

You know those moments when you can just see a player work his way into a zone. Saturday's game had two of those, with Selden staying red hot when it mattered most and Kentucky's Tyler Ulis doing everything he could to prove he was the best player on the floor in this one. And in the first half, he certainly was.

Foul trouble for Kentucky and some clutch hustle plays by Kansas ultimately played a big role in this one, but there's little doubt that this game, the latest version of How Much Can Your Eardrums Take at Allen Fieldhouse, will be remembered for the way Selden stepped up like a junior who has played a ton of basketball is supposed to.

There's no doubting that there's something about seeing Kentucky on the uniform of the man guarding you, and if that's what it took for Wayne Selden to return to the beast-mode style he displayed earlier this season, then so be it. The biggest question now is, can Selden sustain that against every opponent the rest of the way. Nobody expects the junior guard to go for 33 points and carry the team night in and night out, but people — including his coaches and teammates — should expect for him to be able to play with the kind of aggression and intensity he showed against the Wildcats that not only won the game but also got KU's season back on track.

1 – Why not just keep the Wayne Selden love rolling? The KU junior was terrific in this one and he showcased just about every aspect of his game. He shot from distance with deadly accuracy, drove and attacked the rim at just the right time and played with poise and looked cool, calm and collected when Kansas needed it most. Sure, the numbers say this was a career night for Selden, but if you watched it, you realized that even his terrific stats did not fully indicate just how well he played. 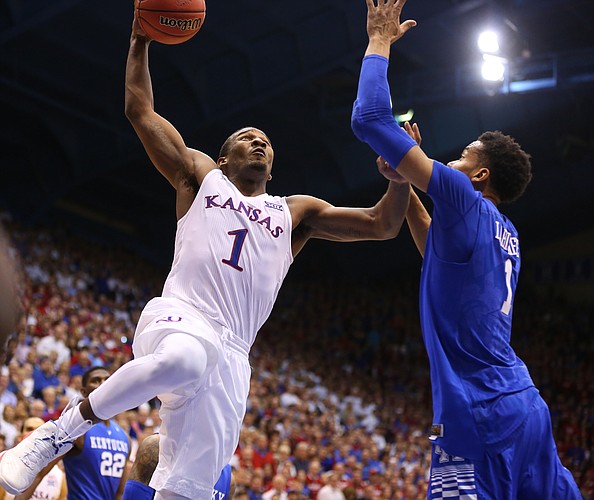 2 – Give Jamari Traylor a little love for this one, too. The senior forward had not topped the 15-minute mark since Dec. 22, yet he played 25 big ones on Saturday night. Traylor was not without his oh-no-why-did-you-do-that moments against UK, but he did a ton of little things that helped KU pick up the victory, few bigger than his knock-away from Ulis late in the game that landed right in the hands of Frank Mason, who calmly buried the three to make Traylor's hustle play worth it. Four offensive boards, two assists, a couple of dunks and a blocked shot made Traylor's night productive. And his effort in KU's triangle-and-two defense that changed the game made his night fantastic. 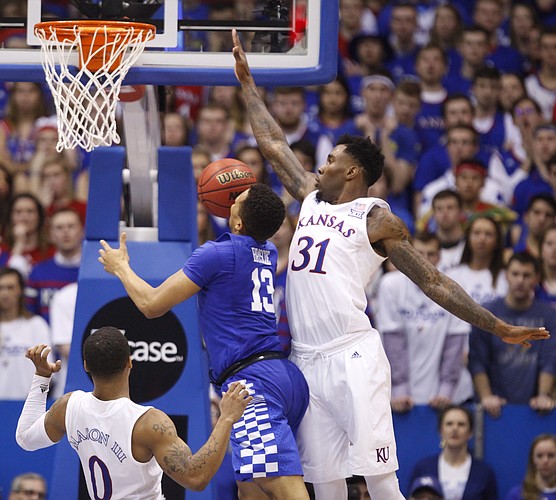 Kansas forward Jamari Traylor (31) defends against a shot by Kentucky guard Isaiah Briscoe (13) during the second half, Saturday, Jan. 30, 2016 at Allen Fieldhouse. by Nick Krug

3 – Speaking of that triangle-and-two, a tip of the cap to Bill Self for practicing it and then not being afraid to turn to it when it was clear his team needed to change something. I doubt this means we'll see KU go to zone as its primary form of defense from here on out, but the way this one worked, Self has to at least be confident knowing that his team can switch to it on the fly and get the desired result. What's more, there's no doubt that if they continue to use it, they'll only get better at it.

1 – Free throws, free throws, free throws. Just as KU would've lost by double digits had Wayne Selden not played the role of Superman, Selden would not have had to be the hero had Kansas knocked down its free throws. Even if KU had made just half of the 17 charity shots it missed, the Jayhawks would've cruised to an easy victory in regulation. Chalk it up to one of those games, but don't let anyone call you crazy if you think this is worth more than a little concern. 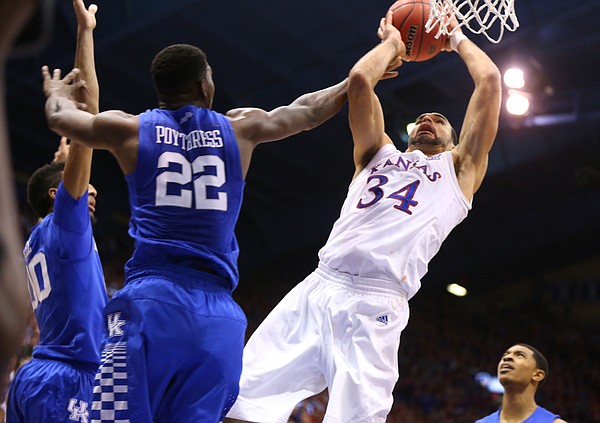 Kansas forward Perry Ellis (34) gets inside for a shot against Kentucky forward Alex Poythress (22) during the second half, Saturday, Jan. 30, 2016 at Allen Fieldhouse. by Nick Krug

2 – It continues to be clear — and bafflingly so — that KU is in trouble against ultra-athletic teams. Landen Lucas, Brannen Greene and even Perry Ellis and KU's back court are not the same type of premier athletes that a lot of other teams have and KU has had in the past. That's not to say they're not good players, rather a strong reminder that in order to take down those more athletic groups, KU has to play strong team basketball on both ends and out-effort its opponents. The Jayhawks — eventually — did that against Kentucky and should feel great about finding a way to get it done. 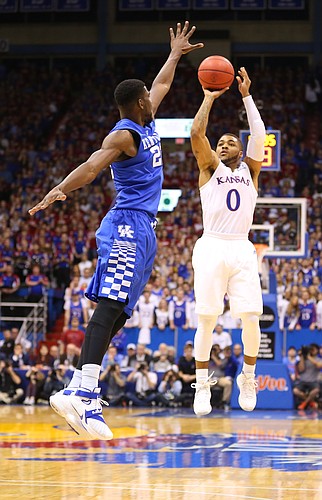 3 – If not for the big shots each guy hit — Mason's three mentioned above and a big one by Graham that cut Kentucky's 48-40 lead to 48-43 early in the first half — the continued shooting woes by KU's starting backcourt, particularly Mason, have definitely reached troubling status. Both guys are playing hard and competing and both guys remain better than KU's next options, so there's no need to panic. But Saturday was another reminder that if Mason (3-of-11) and Graham (3-of-9) ever find their shots again, this team quickly could look deadly again. 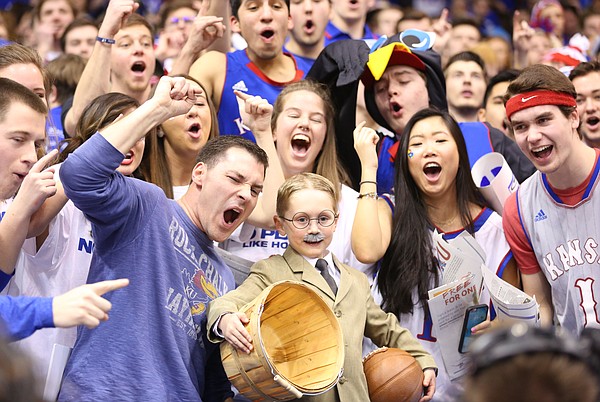 KU's overtime victory over Kentucky on a wild Saturday night...

• Ended Kentucky's three-game series winning streak against Kansas and made the series 22-7 in favor of UK.

• Marked KU's 18th-consecutive non-conference win over a member of a Big Six Conference (ACC, Big Ten, Pac-12, SEC and Big East) inside Allen Fieldhouse. Kansas' last loss against a Big Six non-conference foe on its home floor was to Arizona (91-74) on Jan. 25, 2003.

The Jayhawks will be back in Allen Fieldhouse on Wednesday night a showdown with another heated rival when K-State comes to town for a 7 p.m. tip-off. 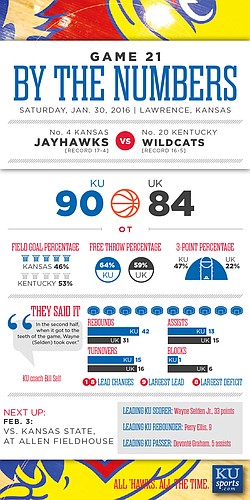 Another reason to smile, production from the bench.

Sheldon's curl around and dunk over Skal was payback for being stuffed by Briscoe earlier. Nice to see.

No. It's just that you don't understand basketball. That's all.

Kansas guards outscored Kentucky's by 10, had 5 more rebounds and the same assists and turnovers...but the Chicken Littles insist they're awful.

Fundies think our guards can do no wrong, as long as one of them has a good offensive game.

And as is usually the case, reality is some place in between, but arguments and name calling is more fun. Practically a national pastime.