The Day After: Surviving a scare in west Texas 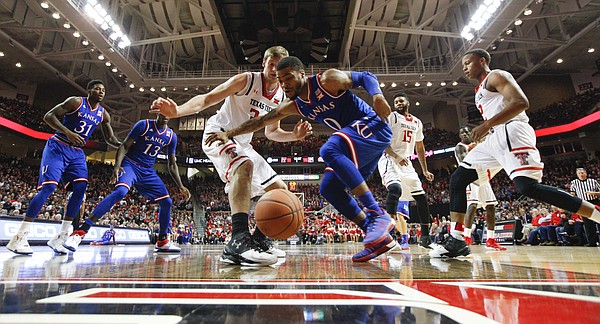 Kansas guard Frank Mason III (0) and Texas Tech forward Matthew Temple (34) hustle for a loose ball under the bucket during the first half, Saturday, Jan. 9, 2016 at United Spirit Arena in Lubbock, Texas. by Nick Krug

In some ways, Saturday's 69-59 victory at Texas Tech by the Kansas basketball team might have been more impressive than the Jayhawks' triple-overtime win over Oklahoma last Monday.

Simple. It's easy to see how a team could get fired up for a home game on Big Monday against the No. 2 team in the nation that also happens to be the most likely challenger to end KU's streak of 11 straight Big 12 titles. Getting up for the very next game on a Saturday night in an unfamiliar environment against a team that hasn't been relevant for years? Not as easy.

But the Jayhawks did it. After resting and recovering following that epic win over Oklahoma on Monday night, KU got tough to survive Texas Tech on Saturday.

The Red Raiders clearly are a much better team than we've seen in the recent past and Tubby Smith has them playing hard. That Tech lineup is full of legit athletes and their attack is pretty balanced, which also makes them tough to play and defeat.

But Kansas did that on Saturday night thanks to the play of their toughest player, junior point guard Frank Mason, who finished with 17 points, 10 rebounds and 5 assists and was clutch down the stretch in every way you could imagine.

Give KU credit for taking the Red Raiders seriously. I'm sure having five days to rest and prep for Tech did not hurt, but, still, it would've been very easy for Kansas to overlook this game in anticipation of what has become a pretty big game on Tuesday night in Morgantown, West Virginia, where the Big 12's only two unbeatens will square off at 7 p.m. The concept of a trap game has become pretty cliché. But they do exist. This definitely was one. And the Jayhawks refused to be victimized. This one didn't lead SportsCenter and it won't be talked about for decades, but in the grand scheme of what this team wants to accomplish this season, this, too, was a very big win.

1 – I already talked about KU being up for this game, but that was particularly important in the first five minutes and KU was up for the challenge. That first five minutes set the tone for the game. You know Tech and its fan base were fired up after waiting all day for the chance to take on No. 1 and had KU been flat at all the Jayhawks easily could've found themselves playing from behind and digging out of a hole instead early instead of forcing the Red Raiders to chase them. KU kept the upperhand pretty much the entire way and never gave Tech a real belief that they could pull off the upset. Credit the coaching staff for emphasizing the importance of a strong start and the maturity of this veteran roster for paying attention and taking the coaches' words seriously. 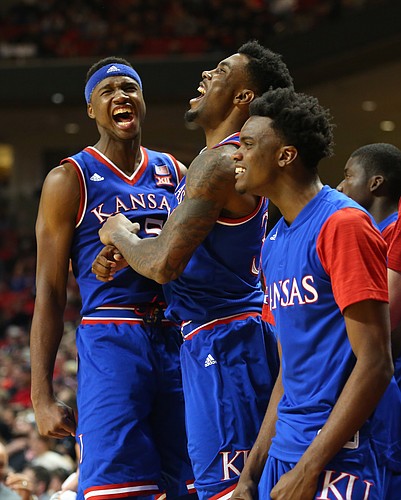 2 – If you watched it, or even if you've only read about it, you already know how good Frank Mason was. Flirted with a triple-double, played tough on D, kept things flowing on offense and knocked down 3 of 6 three-point tries to help KU hold off the Red Raiders. But, in my opinion, Mason's ability to get to the free throw line was by far his biggest contribution in this one. The junior got to the line eight times and hit all eight charity shots in the 10-point win. A big part of getting to the line depends upon how the refs are calling the game, but Mason forced the action several times and made them blow the whistle, therein giving KU what amounted to free points. Mason has been to the free throw line eight or more times just two other times this season, but he knows its importance and he also knows how to turn a 3-of-8 shooting performance into a night when he delivers a game-high point total. 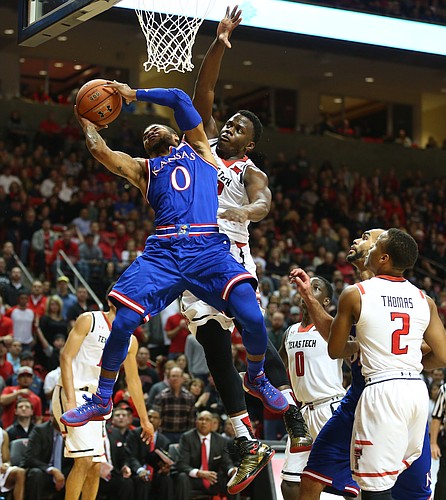 Kansas guard Frank Mason III (0) is fouled on his way up to the bucket by Texas Tech center Norense Odiase (32) during the first half, Saturday, Jan. 9, 2016 at United Spirit Arena in Lubbock, Texas. by Nick Krug

3 – The Jayhawks were great on the glass in this one, finishing with a 42-26 rebounding edge, including an advantage of 32-19 on the defensive glass. Had Tech been able to get just a few more second-chance points (the Red Raiders won that battle, 11-7) this one might have been even more interesting/dangerous than it already was. Mason and Perry Ellis did most of the heavy lifting here, finishing with 10 boards apiece.

1 – KU's team defense was pretty decent in this one, but the on-the-ball, man-to-man D struggled at times, particularly in the first half, when the Red Raiders got several buckets off of straight-line drives to the rim that featured the home team's guards simply blowing by a KU defender. Devonte' Graham had notable trouble staying with his man and any times these breakdowns occurred, they put strain on KU's bigs, who did their best to rotate and cover but were caught out of position a few times and surrendered easy buckets at the rim. 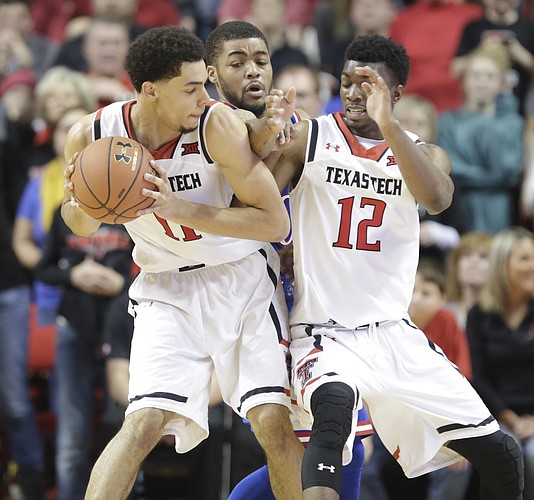 2 – Calling a team out for a lack of killer instinct is often times unfair, but I think it applies here because Kansas allowed Texas Tech to get back into it twice in the second half after opening up sizable leads. The first came after KU's impressive start to the second half helped build a 42-32 lead. Instead of burying Tech from there, KU fell victim to a 12-2 Red Raider run and found the game tied just a few minutes later. After that, Kansas went back up eight points and again appeared to take control only to see the Red Raiders flirt with making it a one-possession game a few more times down the stretch. KU always pushed back when it got tested, but, as well as KU played in the second half, there was no need for the Jayhawks to let Tech hang around. 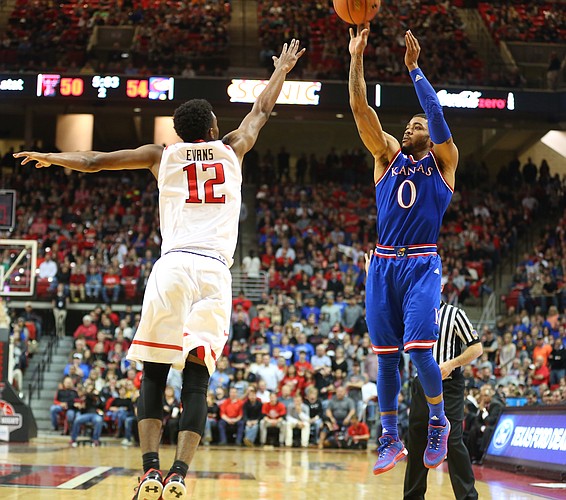 3 – KU was hot down the stretch and Frank Mason, Wayne Selden and even Sviatoslav Mykhailiuk hit a few huge three-pointers to ice the game, but I thought the KU offense settled for three-point looks way too often during the second half. This was surprising, given the fact that the night began with what was clearly an off night in terms of shooting the outside shot. Even still, KU finished 9-of-22 from downtown — just a tick below the season average — and, if nothing else, this fact provides a crystal clear look at how important the three-point shot is for this team. If KU coach Bill Self is OK with his guys firing away even on a night when they got off to a cold start, you can bet he has accepted the triple as a major part of what makes this team tick.

• Improved KU to 2-0 in true road games this season and 6-1 in games not played in Allen Fieldhouse.

The Jayhawks will remain on the road for their next game, a 7 p.m. clash at West Virginia on Tuesday night. West Virginia, which entered Saturday night ranked 17th, knocked off Oklahoma State, 77-60, on Saturday night to move to 3-0 in conference play, which means Tuesday's showdown will be for sole possession of first place four games into the Big 12 season. 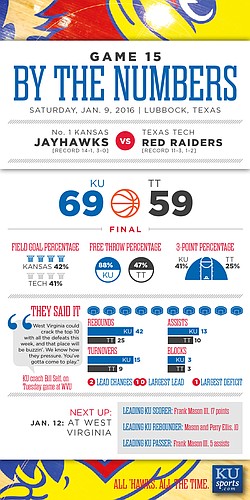 Matt, does the team ever travel straight from game-to-game, as opposed to stopping in Lawrence? Especially when classes are out? Just wondering.

I don't think "surviving a scare" is accurate here. Texas Tech didn't have the lead in the final three minutes, nor were they in position to take a game-tying or -winning shot at the buzzer.

Matt, you are on point here. If I may, I'd like to offer a thought for your consideration. Your reason to sigh #3 kind of sounds like the cliche "live by the 3, die by the 3." Maybe it's the fact that Bill Self has always been an "inside out" coach, but this team is very much different, and needs the freedom to shoot itself out of a slump, just as we would suggest (in a very cliche manner) for any individual marksman. We have 5 guys in the rotation (8 overall) shooting 40% or better out there, half way through the season. For some reason, we feel it's bad to lose a game by missing a bunch of 3 pointers, but the deal is, those shots are worth 3 points. As a team, we are shooting 45.3% beyond the arc, which means we'd have to shoot 68% inside the arc to justify shooting anything BUT 3s. Currently, our 2pt% is 50.5%. My point, I guess, is that while you can certainly lose a game because the long ball isn't going in, you can also lose a game because the short ball isn't going in. "You live by the layup, you die by the layup." The 2007 Elite 8 game vs UCLA comes to mind...

Dustin, I completely agree. Percentages matter. Shooting the 3 isn't "settling" when you are shooting 45%. To add to your point, most people think shooting 50% is good, but that is equivalent to shooting 33% from beyond the 3 point line. It seems like some people have a hard time accepting the value of the 3 pointer in basketball. Duke understands its value and they have one of the best offenses in the country, and so does Oklahoma.

Matt Tait said we settled for the 3 too much in the second half, but we were 5 of 8 shooting 3s in the second half. I think that is the exact opposite of "settling;" I would consider that smart play and great offense. One could argue we "settled" for too many 3s in the first half, when we shot 4 of 14; but a lot of those were open looks that just didn't go down.