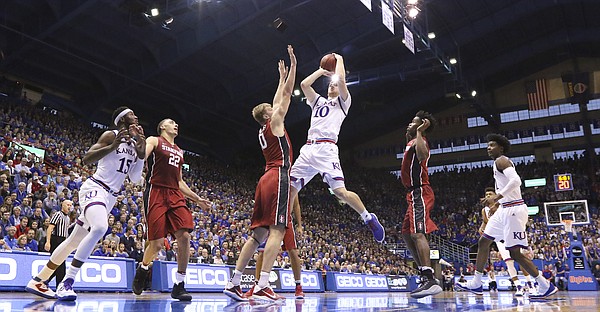 Kansas guard Sviatoslav Mykhailiuk (10) floats in for a shot against Stanford forward Michael Humphrey (10) during the second half on Saturday, Dec. 3, 2016 at Allen Fieldhouse. by Nick Krug

A little more than a week ago, Kansas basketball coach Bill Self during an appearance on the weekly Big 12 coaches teleconference shared his thoughts about his ideal rotation and how it related to this year’s team.

Because of strong recruiting, strategic depth and the team-first mentality of nearly all of the players he has brought to Lawrence, Self, more often than not, has enjoyed the luxury of playing to that number while still having bodies on reserve in the break-glass-in-case-of-emergency role.

Even with the recent, season-ending injury to freshman center Udoka Azubuike, nothing really has changed regarding Self’s rotation and the way he would like to use it. What is gone is the Jayhawks’ margin for error and any depth this team once appeared to have.

“Each situation’s different,” Self said. “When I was at Illinois, we had four really good bigs so I didn’t care about fouls. We played extra aggressive and when a guy got two fouls in the first half he basically took himself out, which was great for team chemistry because it forced us to play everybody.”

The Azubuike injury very well may force Self to play “everybody” in the coming weeks, but the playing time tiers for each available Jayhawk seem to be clearly defined.

With that in mind, let’s take a look at where the Jayhawks’ rotation sits 12 games into the season with the beginning of Big 12 play less than a week away.

Believe it or not, the Jayhawks have used four different starting lineups so far this season, with guards Frank Mason III, Devonte’ Graham and Josh Jackson being the only players to start all 12 games thus far.

After tinkering with sophomore Lagerald Vick in the starting lineup for three games, Self has moved on to Sviatoslav Mykhailiuk in that fourth guard role and the junior from the Ukraine who stayed in Lawrence for Christmas has responded with some of the best games of his career.

Because of that, at least right now, it seems as if Mykhailiuk has a hold on that fourth perimeter player spot and Vick sits at No. 5. Most years, that would put Vick on the outside looking in for minutes. But because of the four-guard approach, Vick still stands to get plenty of playing time and enters Big 12 play averaging 25 minutes per game, just 0.9 minutes per game less than Mykhailiuk.

With Azubuike out, Lucas slides back into a starting role and, barring foul trouble figures to play 30-plus minutes per night.

Sophomore Carlton Bragg Jr., who remains in search of some consistency and comfort, is the obvious No. 2 big man both because of his potential and experience and all of a sudden could be one of the most important players on the team, even while struggling. Self talked after the Jayhawks’ victory over UNLV about needing Bragg to play big because of the Jayhawks’ lack of depth in the front court.

Freshman Mitch Lightfoot, who opened the season strong before getting stuck on the bench, has returned to action of late and is KU’s clear No. 3 big with junior transfer Dwight Coleby working as the No. 4 forward.

Unlike Vick as the team’s fifth perimeter player, Coleby seems more likely to fit into Self’s ideal vision of what a fourth big man would be. Coleby is averaging just six minutes per game and has played just eight minutes combined in the last five games.

Although that nine is now set in stone — even if some shifting occurs — Self said the impending arrival of Big 12 play might tighten the rotation a little on its own, which, barring further injury or foul trouble, would give KU’s suddenly thin lineup the appearance of more depth.

“I don’t know if your bench shortens,” Self said of the start of conference play. “But I do think you probably play your most productive players a couple or three minutes more than what you would during non-conference play.”

well, Dok brought something to the table that none of our other bigs bring, that being an ever improving rim protector and finisher at the basket. None of our other bigs have that. So even though he is a young freshman with much to learn, his physical abilities and quick progression in just those first ten games will be a big loss. Coach will make the remaining bigs work, but that loss hurts.

I lost my appetite for a couple days thinking about Dok's injury. It sucks. Big time. It was so much fun to finally get to watch a real Big who can play like a Big should play. With energy dunks, rebounds, swats. I meant, with ENERGY. Freakin' ENERGY, not only excellent footwork or throwing big body to screen or rebound. Now, we're back with so-so Bigs who are good enough to provide rebounds or screens or blocks. No offense, but current bigs need to really bust their butts to help carry the team's load to NC..

Basketball is a game of match ups and Self is one of the best at figuring out what can work before a game and more importantly during a game. The Big XII season and on will depend on 1) no more major injuries to any of the 9 players discussed, 2) staying out of serious foul problems (need their best players playing), and 3) Bragg taking a giant step forward. There will be games in which other teams can play multiple quality bigs and KU will need to be able to match their size (girth will be an issue without Azubuike). Jackson has done a marvelous and admittedly, at least to me, surprising job playing inside, but other teams will go after him and no matter how talented he is, you can't get this guy into foul trouble. Therefore Bragg needs to step up and play well at the 4 at times when Jackson picks up early fouls (and he will based on how other teams will scheme KU). The rest of the season will be a chess match and hopefully the chess master Self has enough healthy pieces to make it a successful and memorable season.

The loss of UA is huge short term and will grow to enormous over the course of the season. Coach doesn't use certain words in public, but I think they mean something privately in the confines of the Coach's office. Words like physical presence, intimidation, enforcer are descriptions that signal intangibles that matter in league play and certainly in post-season. I think Coach loves that stuff. The scrubbed version of these words he likes to use in public is "toughness." We certainly have that in Frank, Devonte and Josh, which grows with the latter by the minute. UA fits the description of "man child" to a tee. There is no substitute to the psychological impact of Landen going to the bench and a 7 ft, 260 lb, 17 year old who appears somewhere around age 35 coming onto the court. Landen is a highly intelligent, cerebral player who uses his talents to the max, but he really doesn't physically intimidate anyone. UA provided that and that matters against the nation's elite teams. All of this really means this Josh Jackson "thing" which can create disruption all over the court is even more important.

well said Humpy. I do believe we can still win it all, but the margin is much, much thinner. With Dok, I fully expected him to be a double double machine by year end the way he was improving from week to week.

Matt, would Azubuike qualify for a medical red shirt?

I don't know the exact number of games but I would say probably played a few too many. But with the potential of leaving early for the pros not a factor.

ya, I think Dok will not be a 4 year player, so maybe the redshirt idea is not something they would even look at. I think if we get two years out of him before he goes pro, we will be lucky.