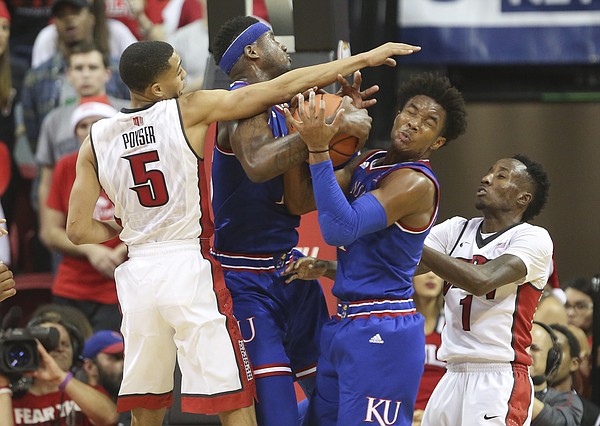 Quick grades for five aspects of KU’s 71-53 victory over UNLV in Las Vegas on Thursday night.

The Jayhawks shot just .444 for the game, including .387 in the second half, and got sub-par statistical nights from dynamic duo Devonte’ Graham and Frank Mason III. Had it not been for the hot hand of Sviatoslav Mykhailiuk and the extreme hustle of Josh Jackson, this easily would have been a straight C kind of night. The 71-point total was KU's second-lowest output of the season (65 vs. Georgia) and snapped a six-game streak of scoring 89 points or better.

Too many layups and uncontested three-pointers allowed the Rebels to kind of crawl back in it. But the Jayhawks did out-rebound UNLV 45-40 and limited the Rebels to .345 shooting for the night.

Limited tremendously on the offensive end — Landen Lucas, Carlton Bragg and Mitch Lightfoot combined to shoot 3-of-7 for the game — the KU big men did enough on the glass and around the rim to creep into B range.

Two of the four starting guards struggled and two of the four were rock solid. That brings us to perimeter player No. 5, Lagerald Vick, who finished with five points, two rebounds, two blocks and an assist to go along with three turnovers and 2-of-5 shooting. Jackson and Svi were better at being good than Mason and Graham were good at being bad, so the backcourt gets hangs on for a B.

Not a night to brag about for the Kansas bench. Carlton Bragg, Mitch Lightfoot, Dwight Coleby and Lagerald Vick combined to play just 46 minutes and, outside of an amazing block by Vick in transition and a couple of timely buckets and rebounds, nothing any of them did really stood out much.