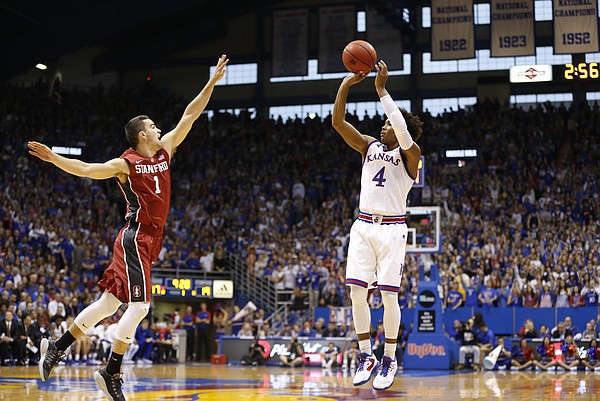 Kansas guard Devonte' Graham (4) pulls up for a three over Stanford guard Christian Sanders (1) during the first half on Saturday, Dec. 3, 2016 at Allen Fieldhouse. by Nick Krug

The best part about the Kansas men’s basketball team’s red-hot shooting from 3-point range so far this season is that nobody is settling for outside jumpers or taking the lazy way to an impressive 3-point percentage.

Not the players. Not head coach Bill Self. And not anybody who wants to play significant minutes.

For proof, look no farther than the Kansas bench, where Self continually has encouraged his players to drive the ball downhill possession after possession.

Never was that more evident than in a quiet Sprint Center on Saturday night, where Self’s instructions could be heard by everyone from those sitting courtside to those in the upper deck.

Two simple words that made a major impact on the outcome and left upset-minded Davidson unable to handle the Jayhawks (10-1) when they were playing at their best. 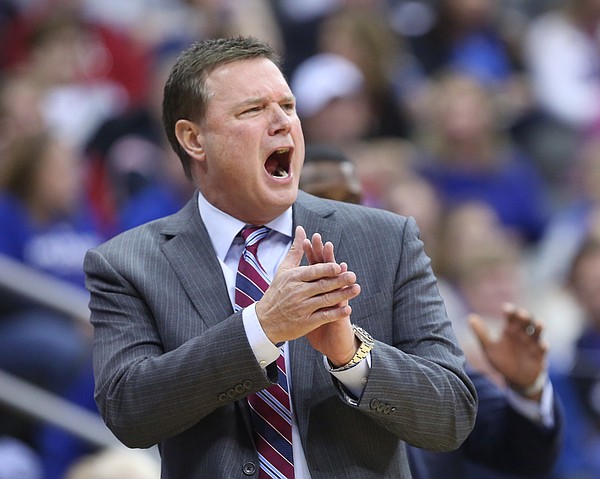 Kansas head coach Bill Self applauds his players during the second half, Saturday, Dec. 17, 2016 at Sprint Center. by Nick Krug

A lot has been made about Self expecting his team to shoot a higher percentage from 3-point range because of the team’s increased usage of the four-guard lineup. Four guards means four shooters and four shooters spreading the floor makes things a nightmare for opposing defenses.

Even with a bit of an off night in last Saturday’s 89-71 win over Davidson, the Jayhawks are still shooting .418 as a team and have four players above .411 from downtown through 11 games.

KU’s half-court attack reminds me a little of the Baylor Bears offense in football. For years, under former BU coach Art Briles, the Bears — and other up-tempo offenses like them (including Kansas at times) — lined up their receivers as wide as they could toward the sideline to create space for the playmakers and speed demons in green and gold to put more pressure on opposing defenses and have more room to roam.

Next time you watch a KU basketball game, keep an eye on where at least two of the four non-Frank Mason guards — Sviatoslav Mykhailiuk, Devonte’ Graham, Josh Jackson and Lagerald Vick — stand in the majority of KU’s half-court sets. They’re wide, flat in the corners and nearly touching the out-of-bounds line on each side of the floor.

The reason? It’s simple. When you’ve got a guy like Mason — or even Jackson or Graham as situations sometimes dictate — handling the ball up top, you want to give him as much space to operate as humanly possible. 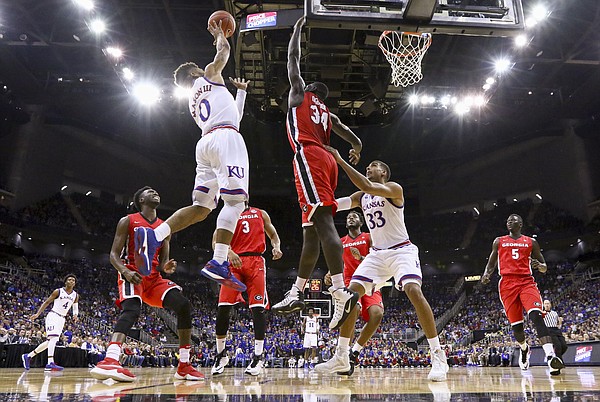 Kansas guard Frank Mason III (0) floats a shot over Georgia forward Derek Ogbeide (34) during the first half, Tuesday, Nov. 22, 2016 during the championship game of the CBE Classic at Sprint Center. by Nick Krug

That frees up driving lanes for Mason to get to the rim and also makes it harder for helpers to recover back to the 3-point line, where KU’s perimeter players have been so deadly when they’ve been given open shots so far this season.

Therein lies the beauty of KU’s 10-1 start and is probably the most impressive part about Self’s coaching job with this team.

Reliant on the high-low offense for years — so much so that he often seemed a little uncomfortable when his teams could not run it — Self has adapted to his personnel better than at any time during his Kansas career and is getting the best of both worlds on the offense end — tough, aggressive, relentless attacking of the basket from a variety of guards who can finish and wide open, easy-rhythm three-point jumpers that, even Self will tell you, are far more valuable to an offense than two-pointers because of the efficiency involved with hitting a high percentage of them.

It takes 15 two-pointers to reach 30 points but five fewer 3-pointers to get to that same total.

It's not that Self has gone away from his emphasis of bigs scoring near the rim. The Jayhawks are still throwing it inside and looking to get what they can down there when they do. As of today, though, that's still a work in progress and KU's offense is getting much more from its perimeter players, which makes the Jayhawks unafraid to roll with that.

As long as the 3-pointers continue to be good looks and do not come at the expense of the Jayhawks’ attacking the basket, you can bet this Kansas team will continue to take whichever is more readily available with next to no objection from Self. 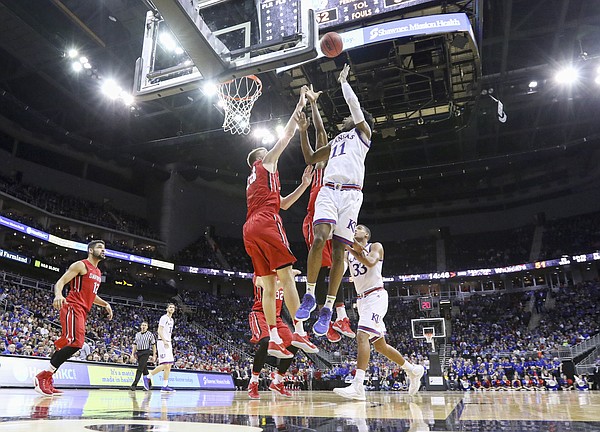 Kansas guard Josh Jackson (11) gets inside for a bucket against Davidson during the second half, Saturday, Dec. 17, 2016 at Sprint Center. by Nick Krug

Not sure why we are not getting responses to this article. Maybe we, as fans, are still getting a handle on the four guard. Remember when we became harder to guard when Perry started hitting 3's last year?

A valiant effort by Matt but smaller basketball lineups aren't new. It's a slow week.

Aren't the small schools running more of the spread (using spacing to compensate for lesser raw talent) while KU is the talented big school that is now adopting the novel O to negate the advantage shift of the "spread"?