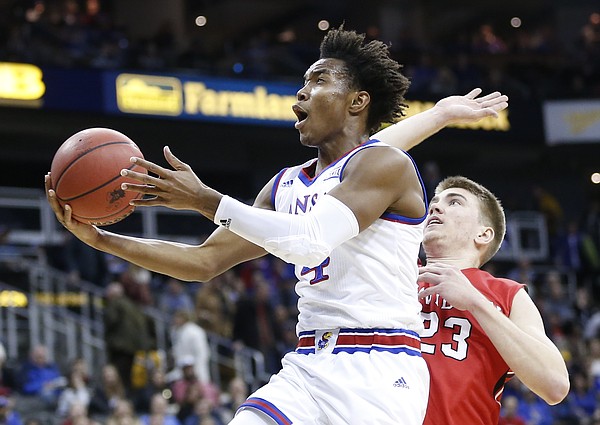 Kansas guard Devonte' Graham (4) gets in for a bucket past Davidson forward Peyton Aldridge (23) during the first half, Saturday, Dec. 17, 2016 at Sprint Center. by Nick Krug

Quick grades for five aspects of KU’s 89-71 Sprint Center victory over Davidson on a cold and crummy Saturday night.

The Jayhawks were good in the first half and even better in the second half, bailing out their 0-for-8 first-half three-point shooting slump with a 6-of-13 clip in the second half. Kansas shot .485 from the floor for the game and finished with 23 second-chance points on 15 offensive rebounds.

KU’s first-half defense was slightly below average and its second half defense well above average. That rounded out to a solid B, trending toward a B+ because they saved their best for last and won the game with a strong defensive showing in the final 20 minutes.

KU coach Bill Self was plenty pleased with the combination of 22 points and 16 rebounds in 50 minutes from four-headed monster Udoka Azubuike, Landen Lucas, Carlton Bragg Jr., and Mitch Lightfoot. That’s good enough for me.

Four of KU’s five guards reached double digits and the unit combined for 67 of KU’s 89 points. But what earned them the A grade was their defense that swiped nine steals and frustrated the Wildcats into 36 percent shooting in the second half.

Lucas, Bragg and Lightfoot all gave good minutes and Lagerald Vick played one good half. There was nothing overwhelming about the bench’s performance but it definitely was as solid as it needed to be.

Steals had an immediate impact and rebounding ended up at our season average of about 39 (which) was tied for second in the conference. I would say we are not displaying much, of the hard to quantify, toughness. Bragg had 8 rebounds but was pushed underneath the basket three times and is still a more finesse than aggressive rebounder. That is the current reality and it may seem more impactful than it really is when Svi or Vick is guarding an aggressive 6'10" forward when we are doing the four guard with Bragg as our enforcer.

It looked like we started sharing the ball better within our big run in the second half. From the last three games I am starting to think we are having a chemistry issue like we ran into last year. We seem to do better on threes when we move the ball quickly around the perimeter or penetrate and kick it out.

Svi, Josh and DeVonte displayed the mid-range jumper as a weapon. Svi was effective drawing fouls but had bunnyitis again. Lunch pail Frank keeps at it and at it until you break. Thanks again to him.

At times Josh looks like an all star and causes 4 point swings in ways that other players cannot. His passing was again a factor and alpha mentality along with Frank and DeVonte's sets us apart from most teams.

Frontcourt + Mason and Co. held 1 of the nations leading scorers to 3 of something shooting and half of his average. That's great D.

Looking for a 10+% swing in just about everyone's FT shooting with good use of their free time during semester break. It was the difference in the last NC team. Gotta like that Josh is taking on the big guard rebounder mentality that BRush also had that year.