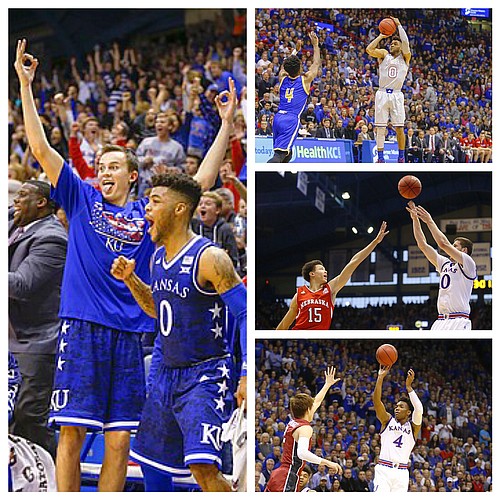 The three-point shot, from any number of Jayhawks, has been a real weapon for Kansas through the season's first 10 games. by Matt Tait

It’s no secret that the three-point shot has become a serious weapon for this year’s Kansas basketball team, with four major contributors shooting better than 43 percent from behind the arc so far this season.

The numbers are even more impressive if you break the season into two segments, which is worth doing considering the fact that KU actually got off to a slow start from behind the three-point line.

You might not remember now because the Jayhawks have been red hot of late, but the first week or two of the season actually included frequent questions to KU coach Bill Self and his players about what was wrong with the Jayhawks’ outside shooting. Their answer, every time, was that they were not in any way, shape or form worried about their three-point shooting. And now we see why.

Through the first five games of the 2016-17 season, Kansas made 30 of the 100 three-point shots it attempted, a respectable 30 percent clip, especially after noting that the season began with a 12-of-52 effort (23 percent) through three games.

But 30 percent, though decent, is not anywhere near average in college basketball today. In fact, 316 of the 347 teams in NCAA Div. I entered Tuesday shooting 30 percent or better.

Luckily for the Jayhawks, the next five games brought that number up quite a bit.

Not only did Kansas attempt 11 more threes in the next five-game stretch, but they also made 31 more, making the Jayhawks 61 for 111 (55 percent) for the five-game stretch and 91 for 211 on the season for a .431 mark as a team heading into Saturday’s second-to-last non-conference game with Davidson at Sprint Center in KCMO.

But the Jayhawks are not even in the Top 50 when it comes to three-point attempts. KU’s 211 attempts put the team tied for 55th through Dec. 12, with Savannah State leading the way with a whopping 170 makes in 449 attempts. Clearly, they’re coached by a man who never saw a shot he didn’t like.

Self said recently that one of the reasons for the Jayhawks’ strong performance from behind the arc is the make-up of their lineup.

“Oh there’s no question (we can be a dangerous three-point shooting team),” Self said. “Absolutely. But if you play four guards you better be more dangerous from the outside.”

The KU coach went on to say that it’s not just the presence of four perimeter players on the floor that makes Kansas a good three-point shooting team, as much as it is the experience, style and understanding of those four players.

Whether you’re talking about lead guards Frank Mason III (23-of-42, .548) or Devonte’ Graham (27-of-62, .435) or the supporting cast of guys like Sviatoslav Mykhailiuk (22-of-51, .431) and Lagerald Vick (12-of-26, .462), these players all understand how to play within Bill Self’s system and, therefore, are taking good shots within the flow of the offense. That much is obvious when considering that the Jayhawks, while shooting a better percentage, have taken less than half of the attempts of the nation’s biggest chuckers.

And that’s to say nothing of freshman Josh Jackson, who has made just 5 of 21 three-point attempts so far this season — and just 29 of 53 free throw attempts — yet somehow is still managing to score 14.8 points per game.

Self has said for months now that he likes Jackson’s shot, hitch an all, and that he’s not going to mess with it too much, if at all, because of the limited time the one-and-done freshman is likely to be here.

But he also has been wildly impressed with Jackson’s overall play and believes the more comfortable Jackson gets the better his shooting touch will be as the season goes on.

Asked if it was by design that Jackson has chosen most often to attack the rim and not settle for jumpers, Self said he had seen a little bit of both from Jackson during practices.

Jackson’s ability and willingness to attack the rim has opened up the outside even more for the other perimeter players on the floor. And when those players are shooters like Mason, Graham, Mykhailiuk and Vick, those open jumpers become almost as easy as layups and tend to help the Jayhawks bury opponents in a hurry.

And that’s without the Jayhawks getting much help from the big men down low, another area that Self believes can and will improve as the season goes along.

“I think we can be more dangerous than just about any team we’ve had,” Self said. “We’ve had other teams with good shooters. When we won it in ’08, I really think Mario (Chalmers) and Brandon Rush and Sherron Collins were really good shooters. And Russell (Robinson) was OK. That’s comparable to what we have now. The difference was, we had (big men) Darrell Arthur and Darnell (Jackson) and Sasha (Kaun) and Cole (Aldrich). I mean, that’s the difference. Think if this team had that team’s fourth best post man. It would certainly change some things. Not taking anything away from our guys now, but it would certainly add another dimension.”

Nice article. I've been waiting for coach to have a team with consistent 3-pt shooting and actually giving a green light to drain it more. Now that those guards look comfortable and confident in shooting 3s, it's just a matter of time to see the increase in #attempts and accuracy. But, unfortunately this team's D is so-so, too many easy buckets driving by. Outside/perimeter D is better than inside, but overall, I think there are still lots of room for D-improvement. Once we clean up the D, we can enjoy another title!!