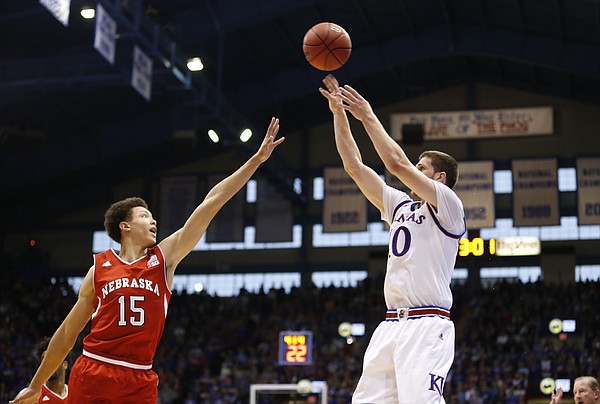 Kansas guard Sviatoslav Mykhailiuk (10) puts up a three from the corner over Nebraska forward Isaiah Roby (15) during the first half, Saturday, Dec. 10, 2016 at Allen Fieldhouse. by Nick Krug

One of these days the Jayhawks are going to start making free throws (I think). Until they do, they’re not going to be able to score above an A- no matter how well they shoot elsewhere.

The Jayhawks weren’t great on the glass (36-35 advantage), let Nebraska get a little too comfortable in the paint in the second half and forced just 12 turnovers.

Landen Lucas had a very productive day and looked a lot less concerned about how he looked or played and just went out there and did the job.

If lots of layups and three-pointers from your top four perimeter players is a good thing, KU knocked it out of the park. Lagerald Vick had a second straight quiet day but the likes of Graham, Mason, Jackson and Svi more than made up for it.

Svi played a great first half, Mitch Lightfoot gave some solid first-half minutes — especially in terms of effort — and Lucas played one of his most solid games of the season.

Is anyone going to be concerned about the dismal record of foul shooting? I shudder to think about a close game decided by foul shooting. I think, if it continues, opposing coaches should say go ahead and foul because odds are the KU players won't make the foul shot.