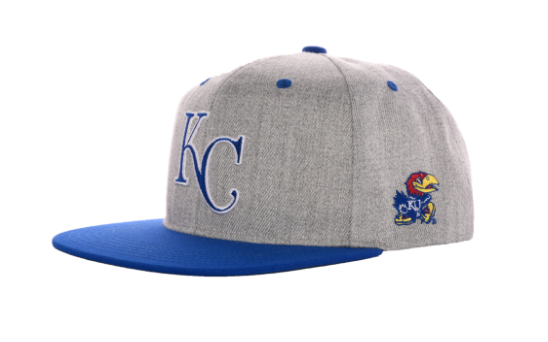 A glimpse at the Jayhawk-themed Royals hats that will be given out to the first 4,000 fans entering through Gate A at Sunday's game. by Matt Tait

KU senior Frank Mason Tweeted on Tuesday that he will be throwing out the first pitch at the Kansas City Royals game on Sunday.

Sunday is KU Day at The K and several Jayhawks from all across the athletic department, including players, coaches and administrators, will be in attendance when the defending World Series champion Royals take on the Minnesota Twins.

First pitch is set for 1:15 p.m. And, according to Mason, that won’t be the first chance fans get to see a strike.

“Throwing the first pitch at the Royals game Sunday. #GuaranteedStrike,” Mason Tweeted before adding, “Oh, and this is gonna be my first time attending a MLB game in my whole entire life.”

The latest KU Day at The K continues the long-standing relationship between the Royals and all three nearby universities. The Royals also will give away Jayhawk-themed Royals hats to the first 4,000 fans who purchased a special discounted ticket online and enter through Gate A at Sunday's game.

In 2014, KU football standout Ben Heeney, now with the Oakland Raiders, threw out one of the most memorable first pitches at KU Day, beaning KU mascot Big Jay with his pitch to the plate.

Throwing the first pitch at the Royals game Sunday 😬 #GuaranteedStrike

Although he never played baseball when he was younger , I am 100 percent sure that he would have been one hell of baseball player.

Congratulations, Frank. Be sure to get one of the KU/Royals hats.