The Day After: In a rut at Rutgers 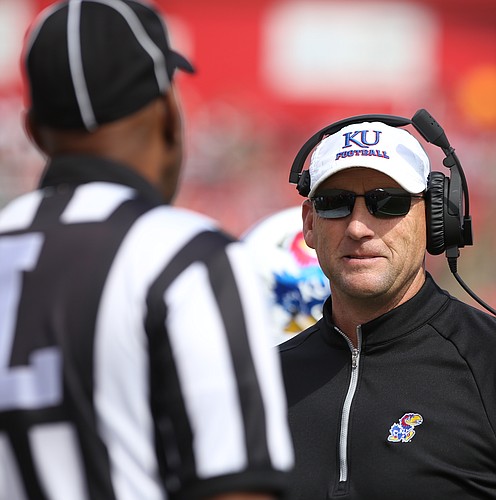 Kansas head coach David Beaty confers with a game official after what some on the Kansas bench thought was a missed face mask call against Rutgers during the third quarter on Saturday, Sept. 26, 2015 at High Point Solutions Stadium in Piscataway, New Jersey. by Nick Krug

If you look only at the score, you might think to yourself, 'Huh, it looks like the Jayhawks had a chance.'

However, if you watched Saturday's 27-14 loss at Rutgers in Piscataway, New Jersey — be it on television or as one of the brave souls sitting in the High Point Solutions Stadium stands — you probably understand that the Jayhawks never really threatened to win this game.

Falling behind by scores of 13-0 and 27-7 put Kansas in holes too big to crawl out of, and the Jayhawks' defense continued to struggle — especially against the run — in what went down as the program's 34th consecutive loss away from Lawrence.

The facts of the final outcome don't do the Jayhawks any justice in terms of how they competed, what they overcame or the handful of good moments they did have. But those things, especially at this point, mean very little to anyone associated with the program, be them fans, players, coaches or administrators.

Kansas lost. Again. And that narrative is not only all too common these days but also, more times than not, expected.

There's no way — or reason — to sugar coat things at this point, nor has anyone I know been doing that throughout the offseason and first few games of the 2015 schedule. This Kansas team is severely overmatched at just about every position and all of the hard work and hard and effort and determination is not going to make up for that. If it could, Kansas would have won Saturday's game against a bad Rutgers team that gave the Jayhawks every opportunity to not only hang around but also steal momentum and find a way to win the game. It never happened. Call it inexperience — on the sideline and on the field — call it poor execution or call it reality. Either way, this team, though continuing to fight and work every day, is in for some rough weeks now that Big 12 play has arrived.

1 – After surrendering a touchdown to the Scarlet Knights on their opening drive of the second half, the Jayhawks' defense held RU scorless for the final 24:24 of Saturday's loss. That left the door cracked for the KU offense to climb back into the game, but, after answering that Rutgers scoring drive with one of its own, Kansas could not find the end zone again and never crawled closer than the final margin of defeat. Rutgers' final four offensive drives of the game ended like this: turnover, missed field goal, punt, kneel down. 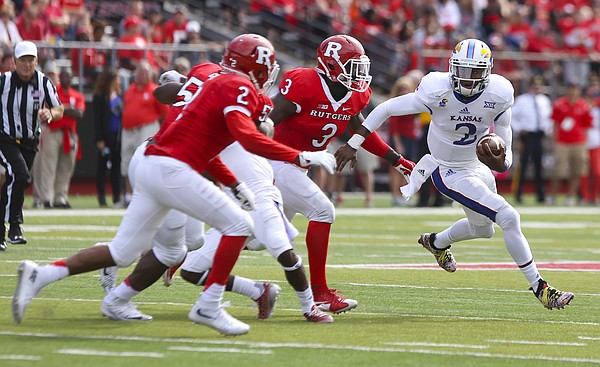 Kansas quarterback Montell Cozart (2) has nowhere to go as he is surrounded by Rutgers defensive back Kiy Hester (2) and linebacker Steve Longa (3) during the third quarter on Saturday, Sept. 26, 2015 at High Point Solutions Stadium in Piscataway, New Jersey. by Nick Krug

2 – You don't have to love him, you don't have to think he's a great QB or even the guy the Jayhawks should be playing with at the position this season... But you have to respect Montell Cozart for doing what he did on Saturday. Legitimately sick (yeah, I've heard plenty of people question it), Cozart completed passes with poise and ease, moved around well and brought calm and leadership to the Kansas offense. His numbers were good — 13 of 18 for 193 yards and no turnovers — but his heart was better. Very impressive showing by the junior, who fought through a lot just to be out there and, no doubt, proved a lot to his teammates. Not that they needed him to prove anything. 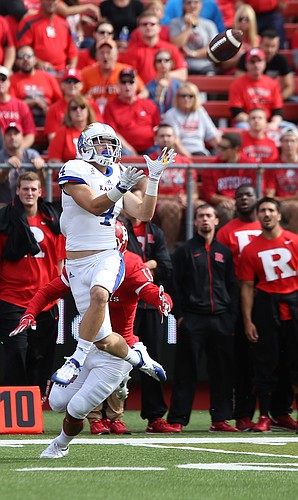 Kansas wide receiver Tyler Patrick (4) gets up for a deep pass during the third quarter on Saturday, Sept. 26, 2015 at High Point Solutions Stadium in Piscataway, New Jersey. The catch helped to set up a Kansas touchdown. by Nick Krug

3 – If you're looking for rising stars on this team, and you're no such a cynic that you actually believe they exist, I've got one on each side of the ball for you. The first is wide receiver Tyler Patrick, a red-shirt freshman from The Woodlands, Texas, who now has put together back-to-back solid games. After catching six balls for 38 yards in KU's loss to Memphis on Sept. 12, Patrick got even more involved on Saturday against Rutgers. He finished with 70 yards on three grabs, but all three were big plays and he nearly scored on one of them. Gifted with great wheels, sticky hands and enough shiftiness to make guys miss in the open field, Patrick, who made the first start of his career on Saturday, appears to be working his way into a big time role and already has the complete trust of Cozart. On defense, another freshman, true freshman Tyrone Miller Jr., continues to show up in a big way. The Michigan native turned in a career-high 11 tackles, which led Kansas, and many of those came in run support, where Miller showed he's not afraid to stick his helmet in there and make a hit. He already has good coverage skills (though he can certainly get better) and has shown that he's tough enough and competitive enough to play a major role on this defense for years to come. His 26 tackles through three games lead the Kansas defense.

1 – The KU run D continued to struggle mightily. For the third straight game KU's opponent had its way with the Jayhawks on the ground, pushing around the smaller Kansas defense and taking advantage of the Jayhawks' inexperience and mistakes. Several KU players talked about the issues in the run game simply being a matter of all 11 guys doing their jobs. That, they say, will take care of it. I'm not so sure. It will definitely help, but teams with bigger offensive lines likely will continue to blow Kansas off the ball and pick up big yardage totals — both on individual plays and in entire games. There's not much defensive coordinator Clint Bowen can do about the defense's lack of size, so in order to overcome this, he's going to have to get even more creative than he's been and hope his young dudes can execute what he's asking them to do to stand up against the run. 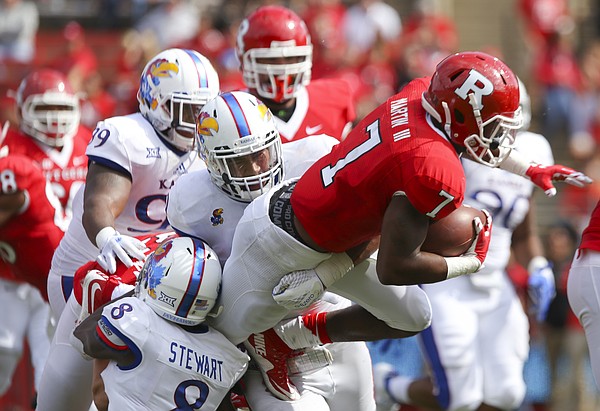 2 – For the most part this season, KU's play-calling has been spot on. But there were a couple of moments in this one when it looked a little curious to say the least. Most notable was a drive late in the game, where the Jayhawks were marching down the field with the pass looking to cut the Rutgers lead to one score. After three straight passes moved KU solidly into Rutgers territory, Rob Likens called for first- and second-down runs. Neither went anywhere and that put the Jayhawks in a hole on third, and ultimately, fourth down. I'm no offensive coordinator and I understand that sometimes you gotta play the odds and call what you think fits the defenses you're seeing. Rutgers no doubt adjusted to what KU was doing, but sometimes you also gotta go with what's working until they stop it. That was a missed opportunity and a score on that drive would've made things really interesting and put the pressure on Rutgers and the momentum in KU's corner. 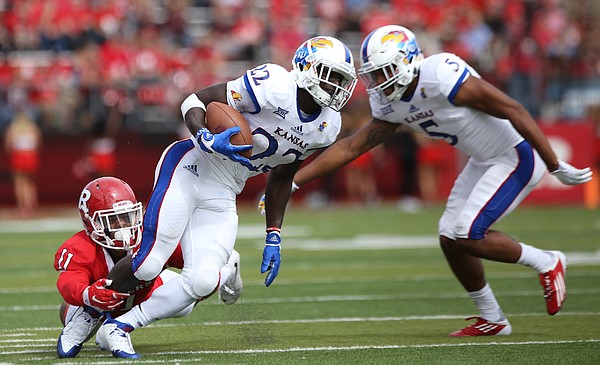 3 – KU's offensive line struggled mightily in run blocking in this one, paving the way for a 2.2 yards-per-carry average and giving junior tailback Ke'aun Kinner next to nowhere to run on the 15 times he was handed the ball. Kinner, who had gone over 100 yards in each of KU's first two games, finished with just 23 yards on 15 carries, a 1.2 ypc average. The Scarlet Knights certainly deserve some of the credit for stacking the box and daring Kansas to beat them with the pass, but KU got no push up front and too often allowed multiple RU defenders to crowd the Kansas backfield. As a team, KU finished with just 64 yards rushing on 29 carries. That number is made even worse when you remember that De'Andre Mann had the game's longest individual run of 41 yards. Take that away and you're looking at 23 yards on 28 carries. Look, yet again, for some more tweaks to the the lineup up front during the coming week.

• Dropped the Jayhawks to 0-1 all-time against Rutgers

The Jayhawks will jump into Big 12 play for the first of nine consecutive weeks against conference foes with a road game at Iowa State on Saturday. Kickoff is set for 11 a.m. at Jack Trice Stadium, where the Jayhawks have not won since snagging a 35-33 victory in 2008.

I don't expect much this season in the way of wins, if any. But I like the effort, the heart, the players and coaches continue to put into this. So long as they keep trying their darndest I'll keep rooting for them. And keep hoping for a big-time upset. That would be sweet, even if it's the only win of the season.

We are holding off putting in WIllis because he is our secret weapon for the Big-12 games.

I give Cozart a lot of respect for playing sick when most of us can not even get out of bed. We have a few rising stars but has been the case for 5 years..we lack D1 talent at almost every position. 0-3 vs the three teams we have played is proof. That said...let's improve in areas each week and get players experience.

Matt has the tone for the state of the program about right in this article. The state of affairs is miserable. Kansas is the worst team in Division I football. Even if we played in the FCS this year, we might only go .500. "Maybe."

Just how bad we are is about to be put on display against some competitive Big 12 teams. It's going to get embarrassing. But be Jayhawks, anyway.

My hope is that we experience the worst a team can and become so familiar with taste of defeat that we snap back determined to never experience another season like this one ever again.

We have been experiencing that for the last 3-4 years... I know that the personnel has changed, but I don't believe that there has been a big improvement due to our failing to produce. The only thing that will save us is if we get some D1 type players to play for us... that has to be our priority.

True. The program's in terrible shape, but we're still here reading these articles and commenting so there are at least a few of us KU football fans left!