The Day After: Beat in the Heart of Texas 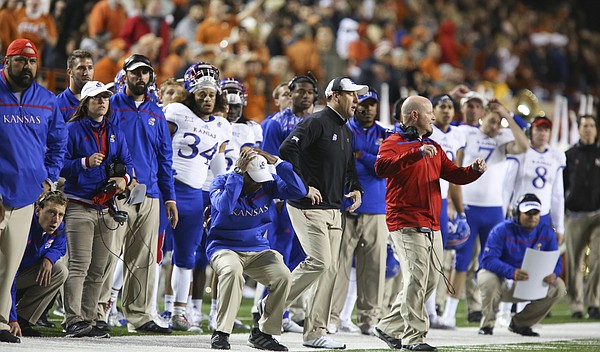 Kansas head coach David Beaty and the Jayhawk bench react to a missed field goal with seconds remaining in the second quarter on Saturday, Nov. 7, 2015 at Darrell K. Royal Stadium in Austin, Texas. by Nick Krug

The scoreboard shows another beating suffered by the overmatched and outmanned Kansas University football team. But those who witnessed Saturday's 59-20 loss at Texas — including the 90,000 UT fans in attendance — know that things got pretty intense there for the Longhorns in the second quarter.

After racing out to a 17-0 lead, UT hit cruise control and KU hit back. Had it not been for a couple of bad mistakes and two empty trips that ended inside the Texas 10 yard line, Kansas might have been winning at halftime.

Had that been the case, I talked to plenty of Texas media folks who said the Longhorns very well might have folded. And wouldn't THAT have been interesting.

As it turned out, KU fell short, made far too many mistakes and the Longhorns easily ran away from the Jayhawks with a strong second half.

KU continues to stay the course. And, at this point, it's really all they can do. The players prepare hard and play harder. Head coach David Beaty has stayed consistent with regard to the expectations in the program and the opponents, like Texas did Saturday, have continued to find areas to exploit the Kansas defense and make life tough for the young KU offense. Many wondered if KU's match-up with the Longhorns would give the Jayhawks a better chance to compete, given the fact that UT did not feature one of those nasty, break-neck offenses like Baylor, Oklahoma State and Texas Tech. And, for a little more than a half, compete they did. Maybe that gives reasonable cause for KU backers to think the same thing can happen against West Virginia and K-State. Then again, maybe not.

1 – It's worth something to point out that the KU defense did respond to that awful start. For a group that has been brutalized most of the season, it would've been real easy for those guys to lay down after Texas got up 17-0. But they didn't. They stayed strong against the run, got good pressure on UT QB Jerrod Heard and forced a huge turnover, all of which gave the offense time to crawl back into the game. The D wore down severely in the second half, but that first-half bounce-back is notable. 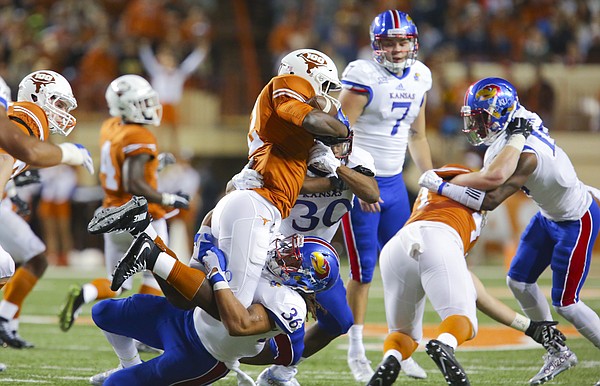 2 – Forget about Ryan Willis' skills and ability to throw the football. It's time we applaud the young man for his toughness. Willis, making his fifth consecutive start, took big hit after big hit and kept getting up. Beaty pointed out after the loss that a lot of the punishment was Willis' fault, but he also said he admired the heck out of the young man's toughness. It's that kind of showing, especially from a quarterback, that can get a whole team playing harder. 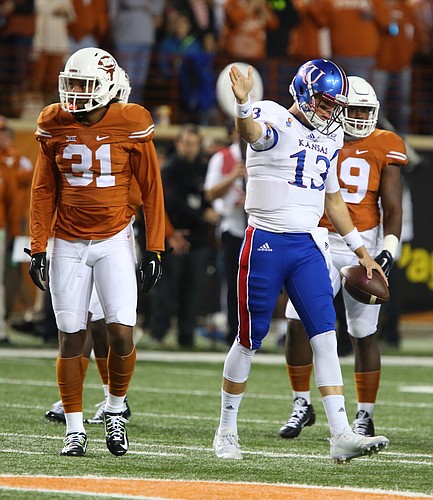 Kansas quarterback Ryan Willis (13) signals a first down next to Texas safety Jason Hall (31) during the first quarter on Saturday, Nov. 7, 2015 at Darrell K. Royal Stadium in Austin, Texas. by Nick Krug

3 – It's debatable whether this is good news or bad, but I'm going to side with good news because of the message it sends. Wideouts Tre' Parmalee and Steven Sims Jr., were suspended for this game and did not travel to Austin after violating a team rule. Beaty did not disclose the violation and, from the sound of things, it was pretty minor. But the first-year KU coach realizes that when you're in Year 1 of a major rebuilding project, nothing can be considered minor and he clearly is willing to take advantage of every opportunity to send a message, prove a point and make it clear what is expected of the players in this program.

1 – I'm sure he's a great dude but I think we've reached the point where David Beaty can't trot place kicker Nick Bartolotta onto the field any more. The missed 26-yard field goal was a devastating blow to this team's momentum and chances on Saturday and Bartolotta, after starting the season strong, has been woeful for the past several games. His confidence appears shot and even though it's a lot to put on Matthew Wyman, he's the guy that should be handling all of KU's kicking duties right now.

2 – Texas did not enter the game known as a passing team, but the UT coaching staff clearly saw enough holes in KU's secondary on film to design their game plan around exploiting the Jayhawks' pass D. It worked. Both Texas QBs who played hit the KU defense with big passes and the KU cornerbacks struggled to both stay on top of UT's wide receivers in coverage and to offer much help in the running game. 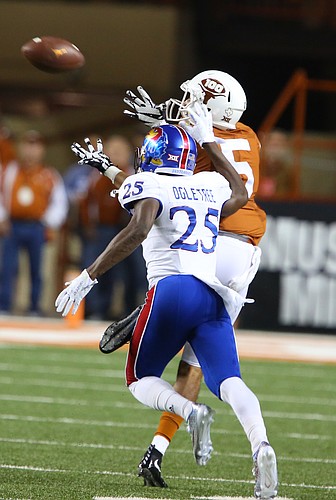 3 – With Sims and Parmalee sitting in Lawrence, the Jayhawks needed a couple of wide receivers to step up. No one really did. Darious Crawley led the team with 63 yards and a TD on three catches, but the touchdown catch, a 19-yarder, came with 1:07 to play. Parmalee has been by far KU's most reliable receiver this season and Sims also has stood out as one of the top options. Without them, the KU passing game struggled. Tight end Kent Taylor was more involved — and should be the rest of the way — but KU's version of the Air Raid offense is far less potent with Parmalee and Sims sitting in street clothes.

•The Jayhawks have lost 37-straight games played outside of Lawrence, the last win occurring Sept. 12, 2009 at UTEP. Kansas has also lost 31-straight league games away from Lawrence. A Kansas team hasn’t won a true conference road game in 28 tries. The last occurred Oct. 4, 2008, a 35-33, win in Ames, Iowa.

•After a rushing touchdown with 8:49 to play in the second quarter, bringing the score to, 24-14, in favor of Texas, Kansas tied its season-high for points scored in the first half of a game. The Jayhawks also scored 14 points against South Dakota State in the season opener.

•KU’s 236 yards of total offense, compared to Texas’ 190, marked the first time Kansas out gained an opponent in the opening half of play since putting up 333 yards and allowing Iowa State just 89 yards in the opening 30 minutes in 2014.

•KU’s four fumbles in the first half were the most in an opening period since putting the ball on the ground a total of five times against Texas A&M in the first portion of the game in 2011.

Falling under the category of awful timing, the way KU's meeting with Oklahoma came one week after OU lost to Texas, the Jayhawks next week will have to travel to TCU to take on the Horned Frogs who likely just saw their national title and Trevone Boykin's Heisman Trophy hopes go out the window with a loss at Oklahoma State.

Matt, why hasn't Beaty taken more advantage of the favorable match ups Taylor and Johnson can create against players they're bigger and mostly faster than? It would seem to me that lining eother of them up as the inside receiver in trips formations would create a lot of favorable match ups for Willis, but neither seems to be on the field very often outside unless they're run blocking.

Matt, excellent overview of what happened and where we are.

For PAT's, I'm wondering if we need to start taking the Chip Kelly approach and simply go for two after every touchdown? I also think that, after we clear our own 45, we should approach each set of sticks with a 4-down intention.

As frustrating as last night was, I'm still encouraged - especially with the fact that we landed a recruit the day after another drubbing.

Is Millweard hurt or is Perry really the next best option?