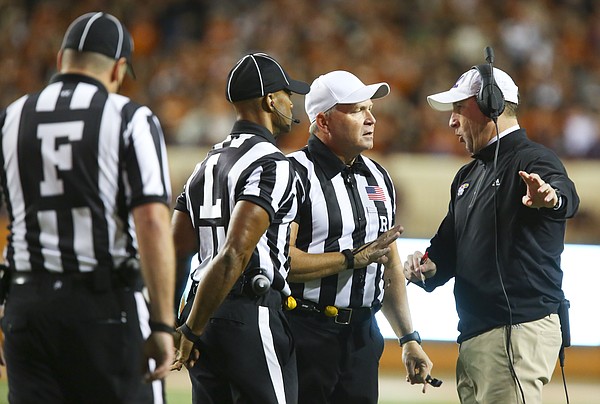 Before leaving Austin, Texas, I spoke with one of the Big 12 officials who worked Saturday's KU-Texas game to see if I could get a clarification on the situation surrounding the punt that was muffed by Derrick Neal in the first half of KU's 59-20 loss.

The ruling on the field was that Neal touched the ball and a Texas player recovered it at the KU 17. Replay during the game confirmed as much — according to the official, the camera angle showed Neal's fingers bend back after making contact with the ball — but KU coach David Beaty continued to have discussions with the referees for several minutes after the replay confirmation.

Beaty said after the game that he was arguing that the UT player who recovered the ball "clearly went out of bounds" and was the first one to touch it after returning to the field of play. By rule, that would be deemed illegal touching and possession would be given to Kansas.

The official this morning told me that the refs on the field missed the call during live action and that replay could not get involved after the fact. It falls in the same category as a play in which a team challenges the spot of the football and on replay officials see a facemask penalty. Because the penalty was missed on the field — and penalties are not reviewable — the infraction cannot be flagged after being discovered by replay.

In short, the missed call on the field cost Kansas because the rules were on the Jayhawks' side.

These things happen, though, and the officials had nothing to do with Neal's poor decision and inability to execute the fielding of the punt.

The official, who said he was impressed with how hard the Jayhawks played, added that Beaty was very calm and respectful during his discussions and "asked his questions in the right way."

Not that it would have altered the game in any way, but when doubts were raised, isn't it logical to review the call, regardless of whether the issue was missed call or not? This, in my opinion, needs to be reviewed by the Big12 officials to ensure that the trend does not continue.

That's because Beaty knows he's fighting an up hill battle in Austin, TX.

There was a holding call on the KU RDE that was nissed as well on the 93 yrd TD run.

I was glad to see Beaty arguing the call. His team needs to know that he'll fight for them. Further, the announcement that the call was confirmed raised an eyebrow. Unless there was a better replay available, there was no evidence that the ball was touched, or untouched.

Neal's inexperience in returning punts clearly showed in the tentative way that he tracked the ball, but half the responsibility goes to Tre' for not taking care of business. Putting Schadler in late made sense because of his experience in catching kick-offs.

If you couldn't see Neal's pinky bend backwards when the ball went by, then you need to go get your eyes checked necause I saw it clear as day 25 feet away from the non-HD screen I was watching the game on last night.

Yeah, I didn't see it, maybe my TV isn't as nice as yours.

Since I was watching at a bar that was showing a non-HD feed of the game, and stilp saw Neal's pinky bend backwards, go make an appointment with your optometrist.

Yep. As evidenced by sooner fans when they got spanked by the horns.

This is why i cannot stand instant replay in any sport. If you can't making things right, why bother having it at all?

Advertisers like it because it slows down a game and stretches it from a three-hour event to four hours. Lots of delays, looking at replays and not accomplishing much. I miss the old days when officials made the best call they could and stuck by it.

If this play isn't illegal, it should be. If a player went out of bounds and then came back in on the play, why couldn't someone off the bench just jump in and do the same.

Yes. I know I'm a woman and shouldn't be commenting on this subject.

It is illegal, and probably for the reason you mentioned. That's why Beaty was questioning the officials about it. The problem is that you can't go back and call a penalty after reviewing a play. It's a stupid rule, and I know why they're doing it, but it's still stupid. If you're reviewing a play to get the call right, you might as well get everything right, penalties included.

KU joins the growing number of "missed calls by officials!