The Day After: Out-toughing Texas 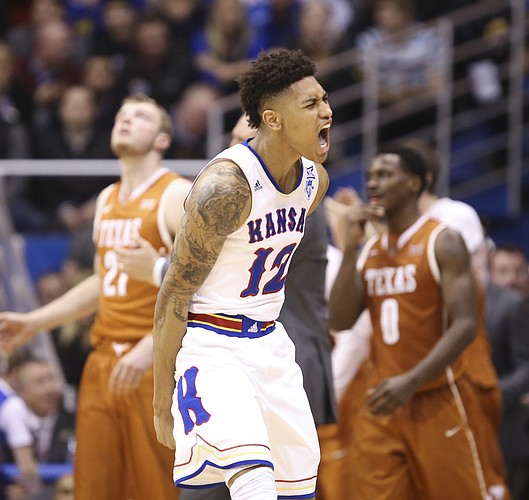 Kansas guard Kelly Oubre Jr. celebrates as the Jayhawks begin to take over the game late in the second half against Texas on Saturday, Feb. 28, 2015 at Allen Fieldhouse. by Nick Krug

Now that's the kind of basketball game you expect to see in March, and the Jayhawks and Longhorns brought it to us a day early.

Tough, physical basketball. A lot at stake for both teams. Pressure mounting with every tick. Multiple guys making a variety of plays on both ends of the floor, with mistakes and miscues having as big of an impact as perfectly executed offense.

I realize that most of you reading this probably did not like several aspects of Saturday's 69-64 victory by Kansas over Texas, but that's exactly the kind of basketball I love to watch so sign me up every time for a game like that.

Frank Mason said after the game that the Jayhawks had won games like that before. And while I respect what Mason probably meant — close, down-to-the-wire, make-a-big-play-late games — I don't think Kansas has won a game like that this season. That was by far the toughest I've seen this Kansas team look and the hardest I've seen them compete. The officiating was inconsistent and non-existent at times, in both directions, and, for the most part, instead of whining about the whistles or lack thereof, KU simply kept playing. Despite being without one of their bigger bodies, they battled Texas' big front line for everything they got and often did so with smaller, quicker perimeter players mixing it up. The game was far from perfect. Perry Ellis was sensational, KU's defense was solid and the Jayhawks showed beyond a shadow of a doubt that the game meant something to them. That mentality combined with someone else emerging as a second offensive weapon to Ellis just could be the recipe for a deep run later this month.

1 – This whole Perry Ellis plays the role of Superman thing is getting out of control. The guy is in one of those zones where he pretty much outdoes what he did the game before every time out. Three straight games of 23 points or more. Carrying Kansas on offense. I Tweeted this during the game and I'll say it again here just because Ellis was that good — I think that was probably the best all-around game of Perry Ellis' career. He was a manchild on both ends of the floor and looks more confident than ever. Not to mention more capable than ever. Ellis' versatile offensive game features so many different weapons and, at times, he flashes all of them during the same possession. The guy is a beast and he's definitely in play for Big 12 player of the year honors. 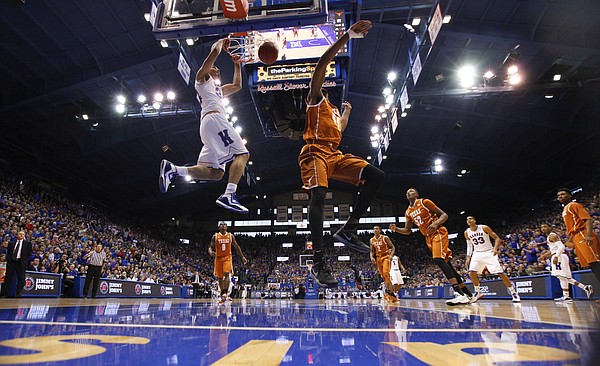 Kansas forward Perry Ellis (34) delivers a dunk against Texas center Prince Ibeh during the first half on Saturday, Feb. 28, 2015 at Allen Fieldhouse. by Nick Krug

2 – Texas' 14 blocked shots established a new school record, but the Jayhawks blocked a few shots, too. KU finished with 10 blocks — three each for Ellis and Kelly Oubre — and did so with the supposed best option at protecting the paint (Cliff Alexander) sitting on the bench in street clothes. Just another sign of how locked in these guys were defensively and how hard they competed. 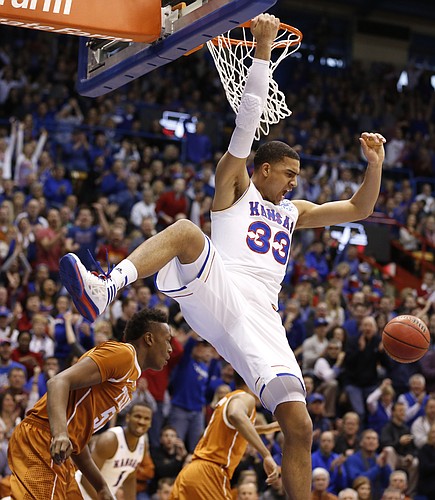 Kansas forward Landen Lucas (33) comes down from a dunk over Texas forward Myles Turner (52) during the first half on Saturday, Feb. 28, 2015 at Allen Fieldhouse. by Nick Krug

3 – With Cliff Alexander stuck on the bench because of questions about his eligibility, Landen Lucas was forced to play 25 minutes and played them well. His stat line (5 points, 4 rebounds, 4 fouls) won't wow you — it pretty much never does — but the fact that he was on the floor for twice as many minutes as Jamari Traylor, who started, tells you all you need to know about how Lucas played.

1 – Kansas made just one three-pointer and Brannen Greene missed all three shots he attempted. Just a few weeks ago, the buzz surrounding this KU team was that they were the best three-point shooting team known to man. Today, they look a little more human and seem to be consistently providing proof for why KU coach Bill Self said it's a dangerous idea to rely on three-point shooting to win games. KU was 1-for-8 from behind the arc against Texas, but the one was huge. Frank Mason drilled a three from the top of the key to put Kansas up two right after Texas had reclaimed a lead it let slip away. Eight attempts is a surprisingly low number for this team, but Self gave credit to UT coach Rick Barnes for forcing the Jayhawks to play inside the arc, which definitely had something to do with it. 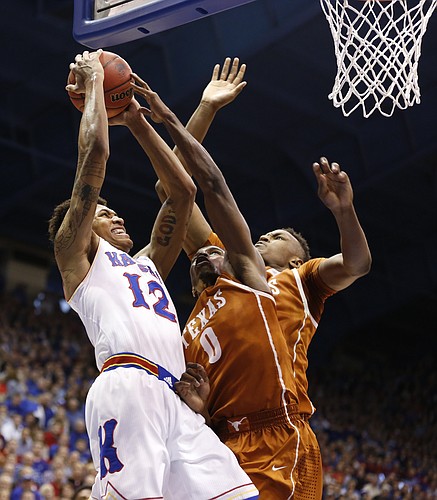 2 – Neither team reached 40 percent shooting in either half. A lot of people will call that kind of game ugly basketball. But I call it a war. Kansas shot 36.2 percent from the floor — and somehow won — and Texas shot 37.7 percent. Beyond that, the two teams who did their best to beat each other up all afternoon combined to shoot 50 free throws. If you're someone who likes to watch wide open offense and points scored in bunches, this wasn't the game for you. Credit KU's free throw shooting (26-for-32) and defense for allowing Kansas to win despite making just 21 of 58 shots. 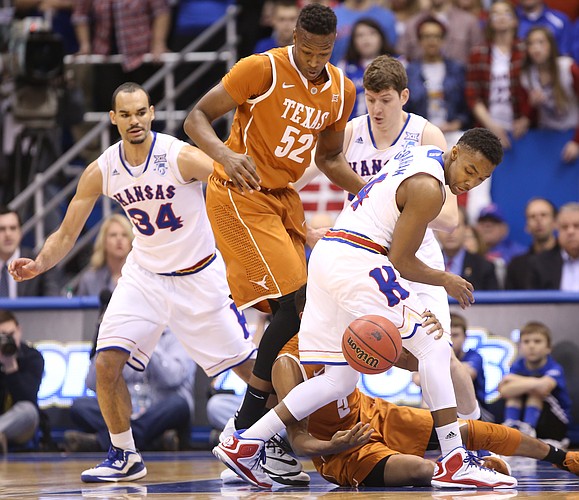 Kansas guard Devonte Graham looks for a loose ball with Texas forward Myles Turner (52) and teammate Perry Ellis during the first half on Saturday, Feb. 28, 2015 at Allen Fieldhouse. by Nick Krug

3 – Just a couple of games ago, Devonte' Graham scored 20 points and looked like a completely new player bound to spend the rest of the season attacking and helping the Kansas offense reach a new gear. On Saturday he played just seven minutes and did not record a single meaningful stat. Perhaps Texas' size and style of play simply did not suit Graham's game or maybe the experience factor was the reason. Either way, Frank Mason was back to the early-season role of playing nearly the entire game (39 minutes) and there's no doubt that he took a beating while doing it. KU's gotta get more from Graham no matter who the opponent.

• Extended KU’s all-time series advantage to 25-8, including a 13-1 mark in games played in Lawrence and an 11-1 advantage in Allen Fieldhouse.

• Marked the 23rd-straight victory inside Allen Fieldhouse, including a 14-0 record in the venue this season. Overall, the Jayhawks are 727-109 all-time at AFH and 189-9 at home under Bill Self. 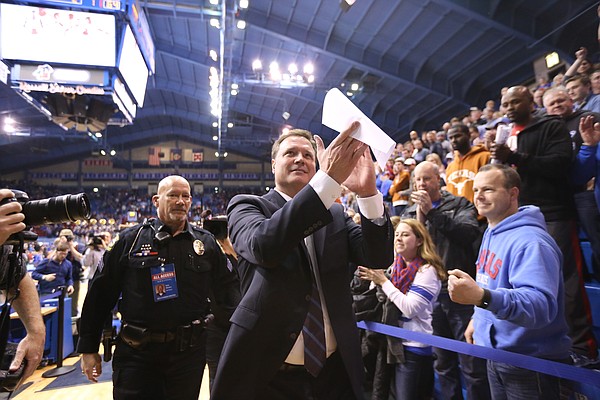 Kansas head coach Bill Self applauds the crowd as he leaves the floor following the Jayhawks' 69-64 win over Texas on Saturday, Feb. 28, 2015 at Allen Fieldhouse. by Nick Krug

Here's a quick look at the conference race. A KU win on Tuesday over West Virginia would guarantee the Jayhawks at least a share of consecutive Big 12 title No. 11. A loss on Tuesday, combined with an Oklahoma victory over Iowa State on Monday, would make KU's March 7 game at OU a winner-take-all contest.

The Jayhawks return home Tuesday for a rematch with West Virginia at 8 p.m. at Allen Fieldhouse. KU fell to the Mountaineers 62-61 two weeks ago in Morgantown. Tuesday also will be Senior Night at the Fieldhouse, where Christian Garrett will be honored for his four years with the program. 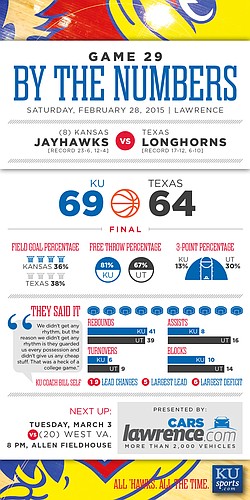 oh man. Christian has to give the lone senior speech... that's tough.

Matt, you were right last time.

We have the best college coach in the country -- and there are a very few around him. No one should EVER suggest a change in coaches.

But all of us have a few warts, so enjoy the teams and suffer with the warts. In this case, the absolute refusal to take on the 3 pt game may be our biggest. We can't defend a 3 pt team and have no interest in pursuing it offensively. The lack of recruits in the footer category is the other. Not much hope for next year, all I see is Zimmerman and he's going to KY if they'll have him. My own little warts are the lack of understanding of the para-sympathetic system is perhaps key. All vertebrates have one, from garter snakes to elephants. The snakes haven't much thinking power. The elephants have more long range memory, but none match people for thinking power. Too bad we've about abandoned instinct for coaching basketball. How much better would our team be if coaches knew how to put our 3 pt shooters 'In The Groove'. We'd perhaps be ahead of KY.

Anyhow, enjoy our team. Root for them. And hope for a footer!

I'm convinced that Coach Self believes the best way to win is to pound it inside and that goes for the "other" team as well. Therefore he not only naturally shuns the 3pt shot but also fears it less from the other guys than he does an inside attack. Therefore he focuses his defensive scheme (doubling down for example) to stop the inside attack, leaving his teams somewhat vulnerable to a hot 3pt shooter(s). We have on multiple occasions seen an opposing player light us up for a personal best only to never be heard from again.

Personally, I rend to agree with him; the 3pt shot is fools gold as we saw against Texas.