So, about those KU hoops uniforms for Korea…

A quick look at what the Team USA/KU uniforms in Korea looked like in Matt Tait's mind. by Matt Tait

By now, even if you weren't one of the thousands of people who packed the Sprint Center last week to check out the latest and slightly modified version of the KU basketball team in its two exhibition games with Canada, you surely have seen the uniforms.

Whether you saw them when the photo gallery of all of the different looks was released prior to those games or in photos from the games themselves, your eyes probably have made a pass or two over the red, white and blue-themed duds the Jayhawks will wear during the next two weeks at the World University Games in South Korea. 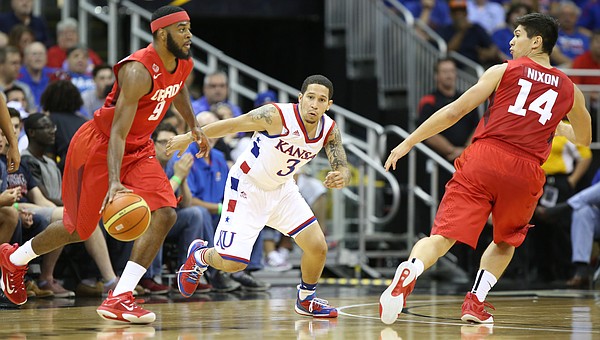 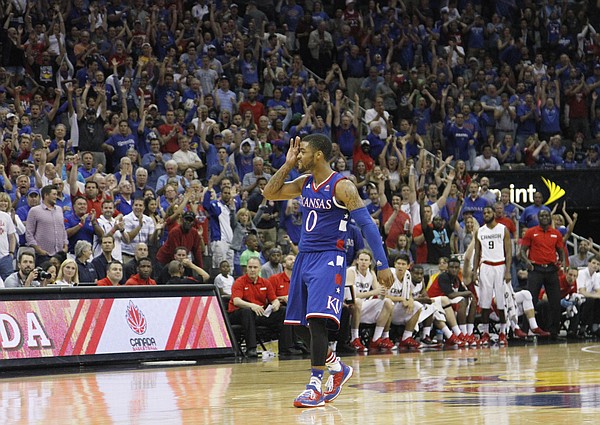 Kansas guard Frank Mason III (0) signals the bench and crowd after hitting a three-point basket near the end of a 91-83 Team USA exhibition game win against Canada Tuesday, June 23, at the Sprint Center in K.C., MO. by Mike Yoder

Having done this for as long as I have, I think it's safe to say that I've learned one thing about KU fans, and, really, fans in general — they like to talk about uniforms.

Even with a football team that has struggled mightily during the past half decade, you can always find someone trying to Photoshop a new look for the uniform or, more often, the KU football helmets.

It's a fun exercise, probably doesn't take too long to pull off and even if it does, who cares.

With that in mind, I'm curious what people think of these uniforms. Were you surprised to see them say Kansas instead of USA? Do you like the way adidas meshed the two, with both KU and the United States getting a little love in the look?

Or, would you have liked to see something completely different?

Personally, I thought they would be USA jerseys, given that it's KU that is representing the country and not the other way around. This concept of Kansas against the world is a little strange, and I think it would be cool if the uniforms said USA on them, much the way the uniforms for the rest of the teams competing will say the name of that country.

Taking this a step further, I even dreamed up a scenario before the uniforms were released that I thought would've been incredible — not to mention a hot seller.

Picture this: Do what you want with all of the other stars and stripes and reds and whites and homage to KU's past and all of that. Those touches are all nice. But the centerpiece of the jersey should feature the letters U-S-A, with the cutout in the A being a Jayhawk.

If you have to include “Kansas” somewhere on the uniform, you could possibly stick it on the back above or below the name or go with the “KU” on the shorts. The possibilities are endless.

Regardless of what the final look became, I don't think there's any question that KU fans would've bought those at a scary pace. And it would've been a cool way to keep things in common with the rest of the teams competing in the Games.

It is just a uniform, though, and it's not that big of a deal. I'm just curious what everyone else thought and if any of you had any designs in your heads, as well. If so, explain away or, if you're the Photoshop type of person, post your vision in the comments section below.

I agree that USA being more prominently displayed would have been more appropriate. I like your design but a black colored jersey? Hope they win no matter what the jersey.

Matt, I'm in your camp on this one. You are correct that at the end of the day it's just a uni, but in this case you are representing your country. I must admit I was dissapointed there wasn't more of a prominent USA feel. What was in my head was what you mentioned in your article. Put USA front and center (I like your Jayhawk addition) and then put Kansas on the back where the last name would normally go and don't put the name on at all. This is about country and not individuals. All that said, I like the uniforms but had hope for a little more USA! USA! USA!! Separately Matt, my son sent me a text of what looks like to be some new helmets modeled by kids with HCDB in the picture. Have you see what I'm referring to?

Probably should have been USA but it is all about getting the KU brand out there and seen. Since realignment that has been KU's goal and objective, almost everything they do now is with the intention of spreading the KU brand and making it more visible.

Agree Steve. Just think we could have accomplished that and still had more of a USA feel.

I love the uniform and think it would be cool to extend them through the next season. However, I do agree it would be more appropriate for USA to be the most dominate element on the uniform. The Kansas theme could have been done in a more subtle way. It may have built the KU brand by appealing to those outside the KU fandom. 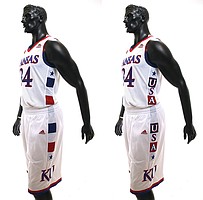 (Saw this idea posted on kubuckets) by Jay Reynolds