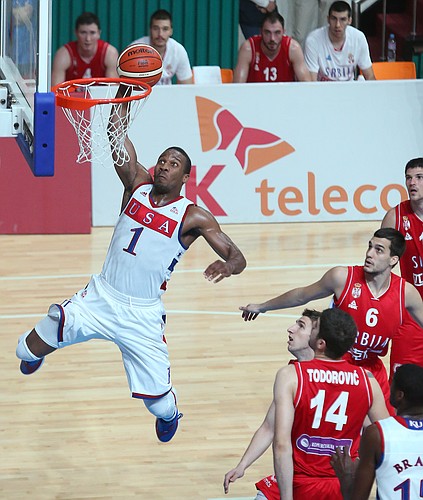 Kansas guard Wayne Selden Jr., puts down one of his two breakaway dunks in there first-half of a Team USA game against Serbia Wednesday, July 8, at the World University Games in South Korea. by Mike Yoder

I've spent more than my fair share of time being critical of Wayne Selden's game during his first couple of seasons with the Kansas University men's basketball team.

And I stand by everything I've said in the past. But the good thing about the past is that it's always behind you. The present is what matters most, and Selden's present sure looks like a gift for the Jayhawks.

If you've been paying attention at all to what's going on in Korea — whether you've watched the games yourself or read and viewed the fantastic coverage from our own Bobby Nightengale and Mike Yoder — you know that Selden has been tearing it up.

He's averaging 20 points per game, has led the Jayhawks in scoring in three of the four games they've played — all victories — led the team in minutes per game all four times and has looked much more explosive, confident and determined than I ever remember seeing him.

His averages through four games: 1 victory, 20 points, 7 rebounds and 3 assists in 36 minutes.

I still question whether the Selden we're seeing in July will be the same guy we see this winter, mostly because I can't help but think that the competition — and, particularly, the type of athletes he'll see in opposing uniforms — will be drastically different than what he's facing today. But still, just like a team that benefits from playing an easy schedule, all a guy can do is attack the guys who are trying to guard him and Selden has been doing just that.

One of the biggest improvements Selden has made has been near the bucket. He's still not making everything, but he is finishing in close a lot better than he did during last season's colossal struggle and a big reason for that is his aggressive nature. He's not just floating and hoping any more. He's going all the way to the rim and either finishing or drawing the foul. For a guy that size, that's always the right move. And it's often easier said than done. But props to Selden for doing it over and over overseas.

Beyond that, his outside shot — his biggest weapon thus far — has continued to look smooth and put points on the board when the Jayhawks needed them most.

It's not just the numbers that have impressed me. It's the mindset Selden has displayed. My biggest criticism of the guy throughout his career is that he always seemed, to me, to be a more worried about how he looked out there on the court than how he produced. I haven't seen an ounce of that in Korea.

Selden looks tough, is always in attack mode, is carrying himself like a true leader — something KU lacked big time the past two years — and has that presence about him that seems to indicate that he knows nobody can stop him.

So far, he's been correct. And following his lead, the Jayhawks/Team USA are in a real position to challenge for a gold medal that I'm not sure anybody thought was in reach.

It's great that we now have both Mason and Selden playing with authority. All we need now is for the mecurial Ellis to similarily step up. I always watch every move of Ellis' when he on the court. It's apparent he's working on his body language to stay positive. For example, when he missed a FT he dropped his head and shoulders, which had become his trademark, but this time, he quickly snapped upright with a determined look. We should have a fairly easy game vs. Lithuannia in the quarters but to medal, we will probably need to rack up wins vs France, Russia and/or Serbia (again). Let's all hope Mason, Selden, and Ellis can all preform on a high consistant level. Speaking of wishing...I wish Moore could make a few More shots.

It's like when a player finally realizes he has one of the premier point guards in the country to utilize. The game just opens up and becomes easy.

Selden looks like he's dropped some weight which has helped get his explosiveness back. Last year, he tried to play at his normal weight, but didn't have the same explosiveness because of his knee surgery. The other big difference is he is now playing the 3 instead of the 2 which is a much better fit for his skills in college.

Selden seems to be thriving at the three. It will be interesting to see where Bill plays him most when Svi and Greene are both available. It's almost an embarrassment of riches positions 1-3 for HCBS this coming season.

Amazing what can happen when a guy sticks around college, goes through some tough times and keeps working at it. Situations like this one for Wayne are kind of overlooked/forgotten in the OAD era but plenty of KU greats have gone through similar situations and shown drastic improvement at the end.

I think play at the 3 is helping as well but I think the biggest help is him losing and have all that unnecessary bulk and the combination of him being healthy and rested are contributing to this surge he is having. I just hope he is not getting use to these FIBA rules and refs by the time regular season starts. Curious to see if he will be as confident as well as effective at the start of the season