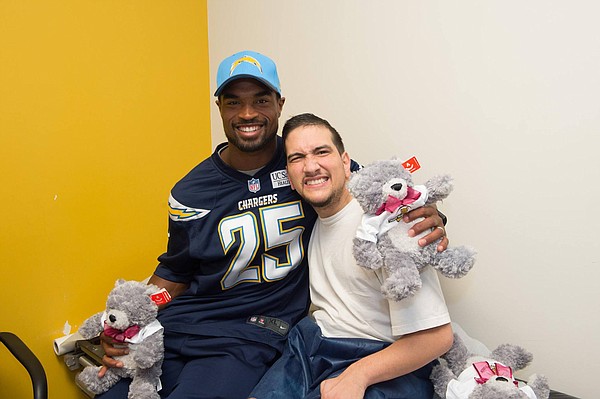 The NFL finally has caught up with what fans of Kansas football have known for years — Darrell Stuckey is one hell of a guy.

Stuckey, the sixth-year NFL pro and 2010 KU graduate who starred in KU's secondary and helped the Jayhawks win the 2008 Orange Bowl, recently was named the San Diego Chargers' representative for this year's Walter Payton NFL Man of the Year.

Each year, one player from all 32 NFL teams is nominated and this year the Chargers made Stuckey their selection.

Recognition and praise for his efforts beyond football certainly is nothing new for Stuckey. Since high school, the Kansas City, Kansas, native has done his part to give back to his community with particular interest paid to helping children and religion.

In addition to participating in numerous community outreach programs like visits to children's hospitals and free football clinics, Stuckey also started an organization known as "Living4One," an organization that aims to "help people discover that they were created to influence the world in a positive way" through living for Jesus."

Being nominated for an award as prestigious as the Walter Payton NFL Man of the Year award, however, takes things to a new level even for Stuckey.

Established in 1970 and attached to the late Chicago Bears running back's name since 1999, The Walter Payton NFL Man of the Year award is given annually by the NFL to honor a player's volunteer and charity work as well as his excellence on the field.

"Serving their communities and philanthropic causes is a strong and long-standing tradition of NFL players," NFL Commissioner Roger Goodell said in a release. "These outstanding young men embrace and represent that important commitment of giving back to our communities. We salute and thank our players for their leadership."

Stuckey has chosen the organization "Teammates for Kids," founded by country star Garth Brooks, as his charity.

"The organization doesn't limit itself to helping one specific charity but branching out to help as many as possible," Stuckey said in a Chargers promotional video. "I've been involved with that cause, off and on, for the last three or four years and it's been an awesome opportunity."

Fans interested in helping Stuckey reach the finals can simply use the hashtag ‪#‎StuckeyWPMOYChallenge‬ on social media sites.

Finalists will be announced in January and the winner will be announced during the fifth Annual NFL Honors awards show, a two-hour primetime special airing nationally on Feb. 6, the night before Super Bowl 50 on CBS.

This is the kind of story I enjoy and expect to read from the great kids from KU. Darrell is a greater person and ambassador of KU than nearly 99% of any other NFL players. He's doing with his life what all people should do. Congrats and good luck.

I thought I would post this story on this site.

"At the end of the day, he wants to be somewhere he can make a difference," Bledsoe's mother, Elaine Cannefax said, describing her son. "Really help someone. Do you want to go help keep something going that has been forever and ever? Or help someone struggling, and do something monstrous? He's that type of kid. He's not selfish. He likes the glitz, and the glory, but he loves a challenge."

In my opinion, he'd really help in a a couple (if not more) ways, (1) Recruiting other potential area high ranking recruits taking a look at Kansas as an option and (2) add some major depth to the DL. Bledsoe will get the Glitz & Glory as well as the challenge that he's seeking if he stayed right in his own back yard. KU's been struggling since Bledsoe was in Junior High. So, he'd potentially do some MONSTROUS things in his Jayhawk Tenure.