Three & Out with Southeast Missouri State...

Three and out, with SEMO...

Before moving on to the match-up with Kansas, let's look back at a couple of the more notable accomplishments from SEMO's 77-0 season-opening victory over Missouri Baptist last week.

• With 77 points, the Redhawks posted their highest total in franchise history since joining Division I in 1991.

• Southeast notched its first shutout over a non-conference opponent in the program’s Division I era. The last shutout overall was at Austin Peay on Nov. 1, 1997 and tonight’s effort marked the third shutout Southeast has registered since joining the Football Championship Subdivision (formerly Division I-AA).

• The Redhawks racked up 516 yards of total offense, the most since totaling 537 yards at Murray State in 2012. Southeast rushed for 304 yards and posted eight rushing TDs. They averaged 7.6 yards per rush.

The Jayhawks aren't the only ones interested in wild and new uniform combinations. First-year SEMO coach Tom Matukewicz, the former defensive coordinator at Toledo, recently unveiled a brand new helmet that it plans to wear for Saturday's game against the Jayhawks.

Off white with the heavy red outline of the school's mascot and red facemask, the helmet is basically the inverse of what the Redhawks wore in the season opener, black helmet with red and black Redhawk mascot.

There's no doubt that these things tend to fire up the players. That's certainly been the case at Kansas, dating all the way back to the red jerseys worn during the Orange Bowl seasons, the all-black look they wore against Iowa State a couple of years ago and the newly unveiled Crimson Chrome uniform that will be worn at some point this season. 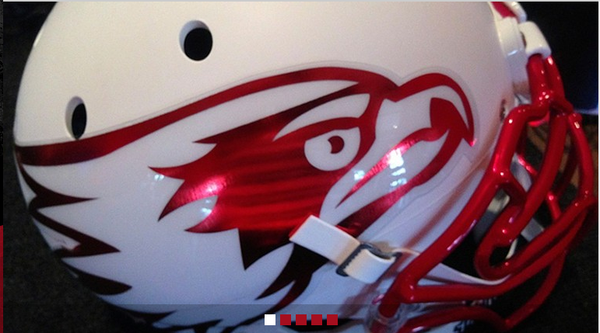 The new SEMO helmet that the Redhawks will wear Saturday vs. Kansas. Photo courtesy of Southeast Missouri State athletics. by Matt Tait

Southeast Missouri State is 1-18 all-time vs. FBS opponents, with the lone victory coming via a 24-14 triumph over Middle Tennessee in 2002. Of those 19 games, just one came against a Big 12 foe, with Missouri rocking the Redhawks, 52-3, in 2008. Other notable names on SEMO's FBS list include: Hawaii, Marshall, Ohio, Central Michigan, Arkansas, Cincinnati twice, Purdue and Ole Miss last season.

You can look at this two ways: 1. SEMO struggles with upper-level talent. 2. Because they've played FBS foes every year since 2000, they're used to it and won't be intimidated by this week's Big 12 opponent.

While SEMO quarterback Kyle Snyder returns to give the Redhawks a steady, veteran presence, it's the players around him that make the SEMO offense dangerous.

Surrounded by weapons, Snyder has plenty of options in the offense, many of whom can turn innocent plays into big gains in a hurry. Snyder in the opener, showed he could make some plays, as well, running for two touchdowns and throwing for 198 yards and two touchdowns.

• Running back DeMichael Jackson (No. 20) had a huge game last week, accounting for 148 total yards, including a 66-yard touchdown on a screen pass and a 25-yard TD run.

• The Redhawks have a two-headed monster at tight end, with Logan Larson being your more typical tight end and Ron Coleman being a wildcard. Coleman is a converted running back and he lines up all over the field, at fullback, tight end, H-Back and others.

Matt, the title of this column is all too reminiscent of the past few seasons. Three and Out. How about a more upbeat title? I know you want the phrase to work with the name of the opponent so maybe you or someone could come up with something more upbeat?

I know that Tait likes the format of the 3 and out. I was among the people who thought the same thing last year as you've stated here. 3-and-out is a negative term (though it's good for the defense). Maybe the format could be slightly altered to fit a "4-Down Territory" title.

If this were a discussion of our team, yes, we would not want "3 & out", but since this is a look at the opponent, then forcing a "3 & out" is appropriate.

I just want it to be Saturday already ...

I will be missing my first game in Memorial Stadium since 2006 due to a family event out of state. Is there any way to watch or listen on a mobile phone?

Like Dale said below, the game is on ESPN 3, you can download the app for your phone and watch it, that's what I did last year for KU's first game

Austin Ray, it will be on espn3. Not sure if your phone gets espn3 or not. I'm out of state and that's how I'll watch it but will be watching either on laptop or tablet.

I like that helmet SEMO is going to wear Saturday.

Me to Aaron. I really wish whatever department who is in charge of branding would come up with something a little like that for the Jayhawk. Did you happen to see the helmets and uniforms Louisville wore Monday? They are with Adidas as well, and it looked much better than the Crimson and Chrome stuff they are pushing on us this year.

I actually kind of like them, but I do think we really need to get back to something like the pissed off 1941 Jayhawk look, rather than the happy smily one.

I didn't catch the game Monday night, but I personally love the Crimson Chrome uniform (actually using it as my facebook profile pic right now). The uniforms that KU wears aren't intended to please the alumni, they're designed to impress potential recruits and I have no issue with that whatsoever.

One big thing I would like to see the athletic department do is update the logo. I think a modern version of the Warhark logo would be something that would appeal to multiple generations of Jayhawk fans and it would be more appropriate for athletic competition than the current version of the logo.

I agree, we need to give the football Jayhawk an upgrade. The smiling Jayhawk says to me, "I am just happy to be here, please don't beat us too badly". But you are right Aaron, they Crimson and Chrome is not tailored to the Alumni, and I will try and be open to them, but they sure would look sweeter with an intimidating hawk on them than old smiley.

I don't think even a Zombie Jayhawk will be intimidating. Great play speaks for itself. The current Jayhawk is an internationally recognizable logo. I don't think we need to use other schools as a model to develop a tougher Jayhawk. We need to be tough.