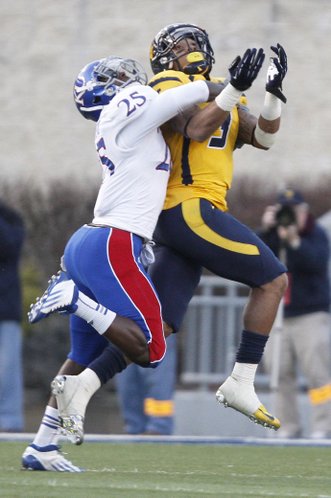 Kansas cornerback JaCorey Shepherd (25) wraps up Mountaineer receiver Stedman Bailey (3) before the ball reached him in the second half of KU's 59-10 loss Saturday against West Virginia University in Morgantown, W.Va. Shepherd was called for pass interference on the play. by Mike Yoder

In the red corner, standing at 5 feet, 11 inches and weighing in at 195 pounds.... He hails from Mesquite, Texas, and is a senior in his final season at Kansas.... The receiver of the secondary, the king of kindness, the DB with the sweet J, JaCorey "The Protector" Shepherd.

In the blue corner, standing 6 feet, 6 inches and weighing in at 225 pounds.... He hails from Monroe, North Carolina, and is a senior in his fifth season at Duke... The overlooked man, the two-sport standout, Sir Issac Blakeney.

OK, so maybe that won't be exactly the way it's billed on Saturday when we get down to Durham for KU's Week 2 match-up with Duke. But it sure has felt that way in the days leading up to the game.

Shepherd, a Kansas cornerback, and Blakeney, a Duke wide receiver who also ran with the Duke track team last spring, could play huge roles in determining whether their teams win or lose when the Jayhawks and Blue Devils lock horns on Saturday, and Shepherd, a defensive-back who started his career as a wide receiver, could not be more pumped for the showdown. 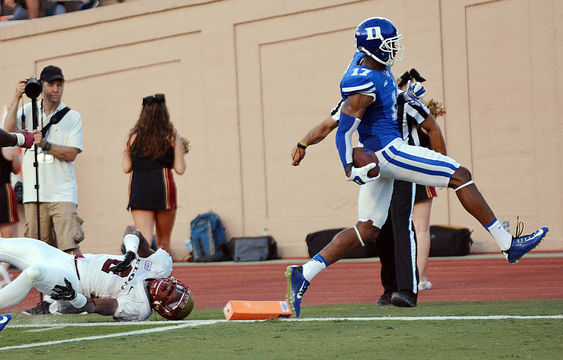 Shepherd said he's never covered a player as tall as Blakeney and he's worked overtime this week to make sure he's ready with a few tricks, some of which date back to his days as a high school basketball player.

“That's one of the first things my dad said,” Shepherd joked. “'Back to basketball when you had to play (power forward).' That's gonna be a challenge for me, and I'm looking forward to it. I've never had to go up against somebody that big.”

So what's the secret?

“I just feel like I have to be more aware of body control,” Shepherd said. “He definitely can get me in a situation where he can shield me from the ball. And obviously the jump balls. If they throw it up there, I've gotta know where I'm at on the field and know where he's at and feel him out.”

With a receiver who stands 6-6, jump balls are inevitable. If nothing else, they're a great last resort for a quarterback who finds himself in trouble and sees no one else open. That's especially true in the red zone.

Shepherd has a strategy for the high lobs when they come his way and it focuses more on what not to do than what he should do.

“I can't jump too early,” he said. “If anything, I'd rather jump later so he's coming down while I'm going up.”

Shepherd figures to draw a lot of action in this one because of last weekend's standout performance from his partner-in-crime, Dexter McDonald, who swiped two interceptions and broke up two more passes in KU's victory over Southeast Missouri State.

The theory goes that teams may shy away from McDonald after seeing a performance like that — it happened to some degree last season — and be more willing to try their luck with Shepherd. The mere thought brings a smile to Shepherd's face and a sparkle to his eyes.

Of course, Shepherd is also smart enough to know that McDonald's presence on the field will not be enough to keep Duke from using its top weapon in the passing game, senior wideout Jamison Crowder, who stands 5-9, 175.

“He's still gonna get tested,” Shepherd said of McDonald. “They have good receivers. The guy Dex is matched up with, he's a legit receiver. They're not gonna shy away from him. He's one of their best receivers.”

Regardless of who checks who or even how often KU sprinkles in different zone coverage looks to try to match up, both Shepherd and McDonald figure to find themselves in several make-or-break, one-on-one situations on Saturday and it could become a situation where the last man standing brings home a victory for his team.

As famed ring announcer Michael Buffer might say.... Let's get ready to ruuuuummmmmmmmbbbbblllllllllllllle...

Dexter has several inches on JaCorey. According to CW, the Duke WR's are real consistent in lining up on particular sides of the field. Would there ever be a thought to having our CB's switch?

Wouldn't surprise me for a second if they put McDonald on Blakeney and let him stalk him wherever he went... Shepherd -- smaller, quicker, etc. -- might be a better match-up on Crowder anyway. Hard to say.

I haven't even read the article yet, because I couldn't get past the picture. Is that the only picture we have of Jacorey Shepherd? One of him getting burned and committing a blatant pass interference penalty in a 59-10 loss? Is there not a picture of him breaking up a pass or making an interception or tackle, or even just one of him standing on the sideline? Why do we put these embarrassing pictures up on these articles, when we're trying to build these guys up?

It's not the only picture we have of Shepherd, but it is one that shows him facing a tremendous challenge, which is exactly what he'll face this weekend at Duke.

It's just a picture. And no one here is trying to build these guys up. That's not our job, nor is this the place they look to boost their confidence.

Hope you enjoyed the blog. If you never got around to reading it, check out the next one.

I read it. I enjoy the Matt Tait catalog of hits. Just didn't understand the picture. Keep up the good work.