The Day After: Tripped up at Texas Tech 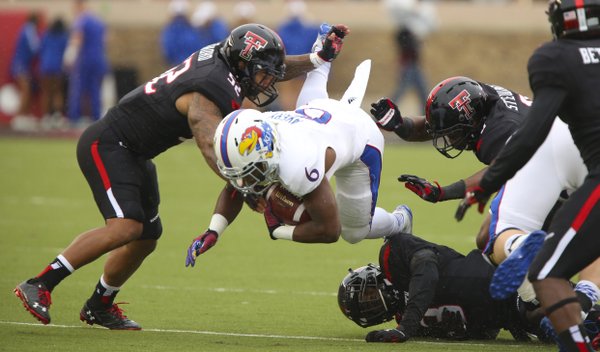 Kansas running back Corey Avery is taken off his feet by several Texas Tech defenders during the first quarter on Saturday, Oct. 18, 2014 at Jones AT&T Stadium in Lubbock, Texas. by Nick Krug

There was not too much to like about KU's 34-21 loss at Texas Tech on Saturday, but also not too much to hate. It was just one of those sort of deliberate and drawn out games in which the Jayhawks' fell behind early, fought to get back in it and then just did not have enough left in the tank — be that juice or talent — to surge past the Red Raiders.

The players and interim head coach Clint Bowen both said they saw more small signs of progress, but they're not out there solely to progress. They want to win. And they're quickly running out of chances in 2014.

With just three road games remaining in 2014 — at Baylor, Oklahoma and Kansas State — the Jayhawks, all of a sudden, are staring at the very real possibility of taking that road losing streak, which now stands at 30, into the 2015 season. That's not to say they can't upset one of those perennial Big 12 powerhouses, but the odds that it will happen are slim. That's what made a loss like Saturday's so tough for these guys because they know they had the talent to play with Tech and let a couple of little things beat them.

The way I see it, Texas Tech is not a very good football team and they made plenty of mistakes that, against more talented teams, would have cost them. That's probably what hurt the most for the Jayhawks late Saturday night and into Sunday, when they, no doubt, thought back about the missed opportunity and wondered why they couldn't get it done in a winnable game. The biggest issue continues to be their slow starts and it's hard to say how that can be fixed on the fly. Like most things, it's probably as much of an attitude thing as anything, and if that's the case, KU should consider itself lucky because playing with good attitude and great passion is not at all a problem for these guys. 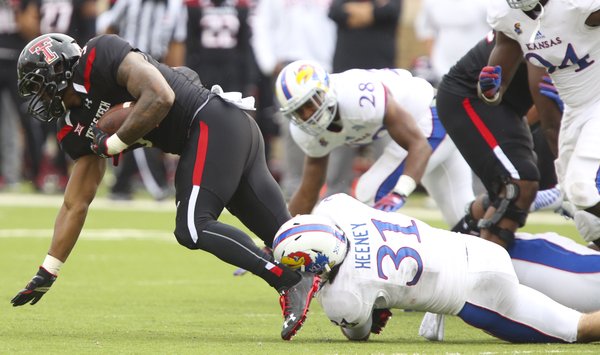 1 – Ben frickin' Heeney, man. I've now covered more than two dozen college football games that the senior from Hutchinson factored into prominently and I now have an undisputed best game I've ever seen him play. Until now, there were so many 14- or 15-tackle outings that blended together that it made it tough for one of them to stand out above the others. But this one was a whole different level of Heeney. He looked as fast as I've ever seen him look, played with his signature attacking style from start to finish and just made play after play after play. Twenty-one tackles. Seventeen of them of the solo variety. And an interception that was arguably the biggest play of the game for the Jayhawks. I've said it before on a couple of occasions, but I don't think it can be said enough. We're in the midst of watching one of KU's all-time greats and the chance to watch Heeney be Heeney is worth the price of admission all by itself.

2 – The Jayhawks continued to show that, at least under Bowen, they're never out of it. Even after digging a 17-0 hole early in the game, nobody panicked, the Jayhawks stayed with the game plan and eventually began to make plays that got them back into it. A lot of the credit for this goes to quarterback Michael Cummings, who, other than a couple of forced deep balls, was pretty solid for the second week in a row. He finished with 235 yards, 2 passing TDs and a rushing TD, improved his completion percentage (from 54 to 63) and used his poise, confidence and leadership skills to keep the offense plugging away series after series. 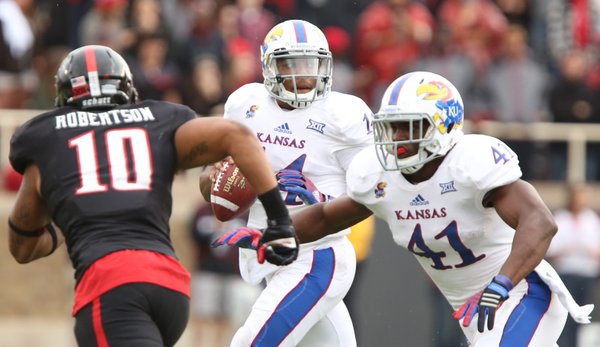 3 – Kansas had just four penalties enforced against it during Saturday's loss in Lubbock. This represents marked improvement from the past two games, when KU finished with 11 against West Virginia and 8 more against Oklahoma State. With a team like this, when the margin for error is so small that the Jayhawks cannot get away with hardly any mistakes or mental lapses, eliminating those moments when they make life harder on themselves is absolutely critical in every aspect of the game. That means catching passes that are catchable, carrying out assignments and fundamentals all the way through the end of the play and, of course, avoiding those unforced errors that turn manageable situations into nasty ones. KU was not flawless in this department across the board against Texas Tech, but they did take care of business in the penalty department.

1 – KU's 128 net rushing yards was nearly 150 fewer yards per game than the Red Raiders had given up to opponents on average this year. The total is not as big of a problem — though they still left a lot of yards out there by failing to convert on third downs — as the yards-per-carry average. Led by Corey Avery's 69 yards on 15 carries, Kansas averaged just 3.2 yards per rush in Saturday's loss, which again shows the number of yards they left on the field, which in turn led to missed first downs and ultimately missed points. KU has the horses to have a strong running game, but too often the blocking at the point of attack is breaking down making life miserable for Avery, De'Andre Mann and Michael Cummings.

2 – After carrying the ball for nine yards on the first two plays of the game, senior Tony Pierson missed the rest of the day with an undisclosed injury. There's been some talk that Pierson might have suffered some kind of injury to one of his hands but no official word has come from KU. Regardless of what it is or how long it keeps him out, it's pretty disheartening to see this happening to Pierson for two reasons — 1. It really puts the KU offense in a tough spot because he's a guy who can do so much and put so much pressure on defenses. 2. It's just a drag for Tony. He's been one of KU's best players during the past four years and been nothing but a model teammate and student and lead-by-example kind of guy. Good things are supposed to happen to guys like that, not injuries that keep them off the field. 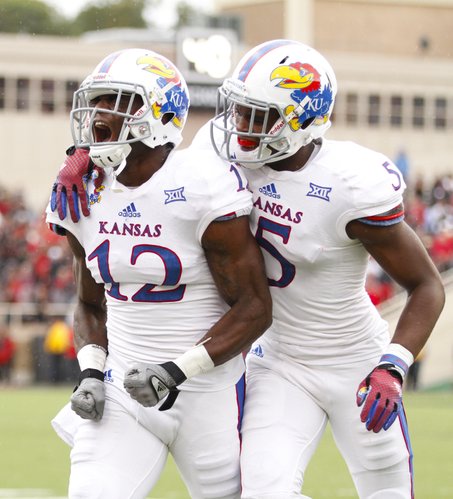 3 – He recently missed a game because of injury, so that could still be a factor, but there's no question that senior cornerback Dexter McDonald is just not quite right. Unlike last season, when he made pretty much every play that was put in front of him, McDonald is having an up-and-down season so far. In his latest outing, he dropped an interception that he probably would've caught 99 times out of 100 and also was beat for a touchdown. To be fair, the ball was thrown perfectly, but McDonald still let his guy get behind him. These aren't catastrophic miscues and it's very possible that he'll bounce back, but the bar has been set so high for him because of his fantastic skills and incredible 2013 season that even the slightest off day makes it seem like something's wrong.

• Pushed Texas Tech's edge in the all-time series with Kansas to 15-1.

• Included KU's first points of the second quarter all season, a 16-yard touchdown pass from Cummings to Justin McCay with 31 seconds to play in the first half.

• Featured another failed fourth-down attempt, which made Kansas just 2-for-11 this season when electing to go for it on fourth down.

The Jayhawks (2-5 overall, 0-4 Big 12) will take their second and final bye of the 2014 season, which many players said comes at a perfect time. Not only will it give them some time to rest up and get healthy, but it also will give them a little more time to further absorb Bowen's coaching style and set the tone for the way they want to finish the season. After the bye, KU will travel to Waco, Texas, for a match-up with Baylor on Nov. 1. 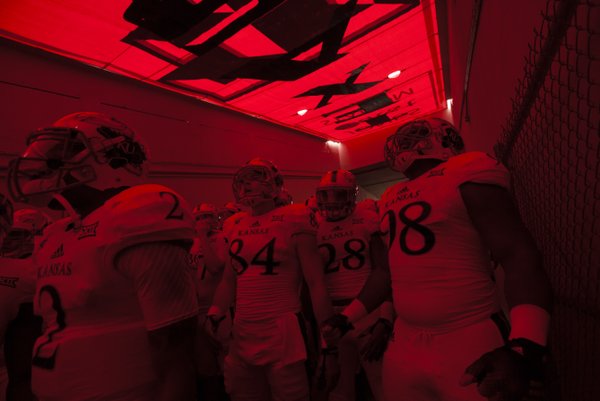 The Kansas Jayhawks get fired up in the tunnel prior to kickoff against Texas Tech on Saturday, Oct. 18, 2014 at Jones AT&T Stadium in Lubbock, Texas. by Nick Krug

Glad you added "Talent" to a possible explanation to the loss, or lack of comeback. As bad as W. Texas A&M is, they still have enough playmakers to win. I see progress, but too little too late. Rock Chalk! Go Royals too!

Both lines got pushed around. With Avery and Mann we should have ripped them on th e ground, and our Dline was just outphysicalled! need studs on both sides of the ball! Mazyck is huge but he's soft!

Not to mention falsely penalized on a "Hands to the facemask" call, which gave TT a 1st and goal instead of moving them back 15 yds and possibly costing them the touchdown they made on the drive.

Also it would have meant one fewer penalties to KU making it only three in the game.

Reason to sigh, how about Wyman missing another chip shot.

I'm sitting hear wondering how Bowen has a chance at winning this job. If beating Iowa St is all he needs then I'm not sold on Zengers decision making ability. Beating Iowa St is an expectation as opposed to an improvement. I said at the beginning of him taking over the team that he'd need 2 wins to put his name in the mix and 3 wins to win the job outright. Unfortunately, neither of those looks possible. There's a chance we may not even see Bowen next year. It's tough to imagine that but it's reality. Wish this team the best of luck the rest of the year, because luck is exactly what they'll need.

I attended my first Jayhawk game this year with TT. Our QBs are too slow making decisions and implementing plays. TT QB had the ball out of his hands in 3s. Jayhawks--appeared to wait until the clock runs down and then begin the play. I agree with John, that Bowen needs a chance to win the job---but the schedule is not in his favor. Let's give him another year. I did enjoy seeing the coach urging the players and not standing on the sideline. Lloyd Kinnison