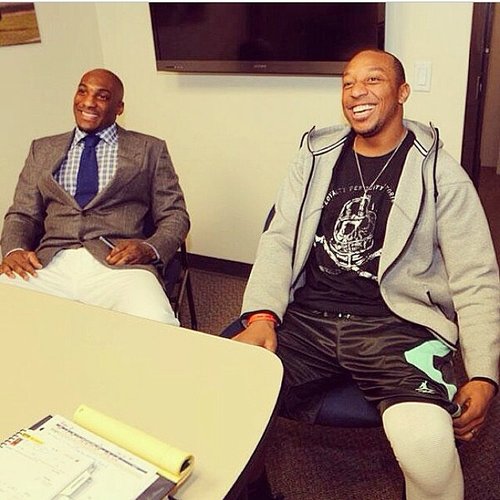 Denver cornerbacks Aqib Talib, left, and Chris Harris at Wednesday's introduction of Talib to the Denver media. by Matt Tait

By now, it's a well-known fact around KU Nation that the Denver Broncos have two former Jayhawks starting in their secondary.

When Denver added free agent Aqib Talib to its roster in the offseason, the signing reunited the former KU cornerback and star of the Jayhawks' victory over Virginia Tech in the 2008 Orange Bowl with his running mate from that game, Denver cornerback Chris Harris.

For many KU fans, having a couple of their favorite former Jayhawks on the Broncos' roster is a nightmare since so many of them are also fans of the Kansas City Chiefs. But Sunday night, during the Broncos home game with San Francisco on Sunday Night Football, Talib gave KU fans a reason to smile whether they dislike the Broncos or not.

For the first time in years (if not ever) Talib gave a shout-out to KU during his introduction that plays along the bottom on the screen on all Sunday night games.

In recent years, Talib often represented his hometown or his high school or said North Dallas after introducing himself. Not Sunday. This time, he simply said, "Aqib Talib, Kansas."

There was some speculation that Talib started leaving KU out of his intro because of his displeasure with the way KU coach Mark Mangino was treated during the end of his time with the Jayhawks. I've never heard that confirmed, but do know it's a popular opinion.

As for why it changed, I don't know the exact details but I know that Talib's snub of the Jayhawks during his intros always rubbed KU fans and several people within the football program the wrong way and I heard that someone at KU reached out to Talib and talked to him about giving KU some love. I even heard one account that Talib spoke to the team before this year's spring game and former KU coach Charlie Weis asked him to start saying KU during the intros. Who knows? But whatever it was, it obviously worked.

During Denver's only other primetime game on NBC this season, they mysteriously did not introduce the Broncos' defense, so this was the first time we were able to see Talib make the change.

Regardless of what they say during the intros, it's still so wild to see two former Jayhawks starting for one of the best teams in pro football.

It never rubbed me the wrong way that they didn't say Kansas, but I sure am glad they are now!!! Bravo!

oh, please. The Denver Broncos are a classy organization. There's no team in the NFL that deserves that analogy, even the Oakland Raiders have cleaned up their act enough to be out of the discussion of the Mizzou of the NFL.

Not a Broncos fan, but that analogy doesn't work. The Broncos actually have championships in their history.

So when Chris Harris says Kansas University, do posters on this blog chastise him?

Maybe someday Steven Johnson will be repping KU on his player intro (as a starter) as well!

Talib just didn't "say" Kansas, it belted it out loudly and proudly. Man, I felt good hearing that.

Aqib didn't like that Mangino was fired the way he was after such a good run. Once Bowen (who coached Talib on the defense) was introduced as the new head coach, he took interest in repping the university again. He liked how they hired one of their own, which made a positive and prominent impact on his thoughts about KU.

Bowen is the man for the job, give him time!

Rock Chalk (if we win out, we're in a bowl) Jayhawk!

I think KU has bigger things to worry about other then how a former player chooses to introduce themselves. I glad he chose to do so but let's start getting some wins. Bowen IS the right guy from a home grown home state played in the program stand point but he has to show he can coach this team to some wins. If we can't beat a down TT team I don't think a win over I ST is going to convince the administration he's the guy. If we can stay competitive with Baylor OK K St and TCU like we did with OK ST then I'm fine with that. Just no more ungodly blow outs. Just show the program is competitive because it certainly wasn't under Gil or Weis. And please please please find a different field goal kicker PLEASE!