The Day After: Oh no at OU 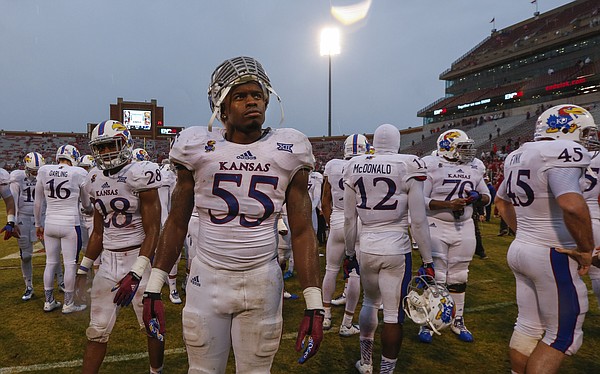 Kansas linebacker Michael Reynolds looks in the direction of the scoreboard while he and his teammates gather to leave the field following the Jayhawks' 44-7 loss to the Sooners on Saturday, Nov. 22, 2014 at Memorial Stadium in Norman, Oklahoma. by Nick Krug

The Kansas University football team was drubbed on the road by Oklahoma on Saturday and it seems safe to say that very few people really saw the 44-7 beat-down coming.

For one, KU had built a little momentum of late, knocking off Iowa State in dominating fashion and nearly upsetting No. 5 TCU a week later. Thinking the Jayhawks would win in Norman was a reach, but expecting them to be competitive, give OU a tough battle and keep that momentum moving in the right direction seemed fair. Even a couple of national writers in the press box prior to the game remarked to me about how they figured KU would easily cover the 28-point spread.

They didn't. Not even close, really, as OU's superior size and ability to adjust to the inclement weather proved to be way too much for KU to handle. The offense did nothing. The defense was blown off the ball over and over as OU freshman Samaje Perine rumbled to an NCAA record and a whole mess of school records and the game was pretty much over by halftime, making the second half a mere formality.

This game was ugly. The Jayhawks never got anything going on offense, struggled even worse on defense and just looked outmanned from start to finish. Some people will want to blame Bowen for this one and he certainly deserves his share of the blame, but this was a total team collapse and the outcome won't move the needle much when looking at whether Bowen is the right guy for the KU coaching job, in much the same way that last week's near-upset of No. 5 TCU did not end with a contract landing on Bowen's desk. It's the big picture that matters here — Bowen's vision for the program, plans to execute that and ability to coach players, rally the program and recruit to Kansas. Those things are all way more important than the outcome of any one game — good or bad — and that's why Bowen remains as strong of a candidate for the job today as he was before the beating at OU. His answers to those questions, and more, during the formal interview process will determine his fate. 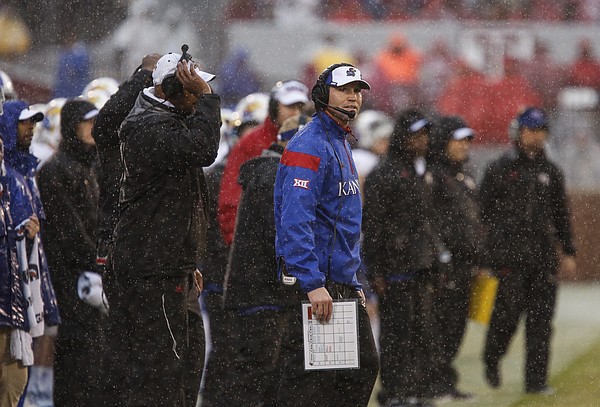 Rain pours down on interim head coach Clint Bowen as he watches an extra point by Oklahoma go through the uprights during the third quarter on Saturday, Nov. 22, 2014 at Memorial Stadium in Norman, Oklahoma. by Nick Krug

1 – These are tough to come by after an outing like that, but there was a play late in the game when senior Tony Pierson caught a short pass and appeared headed toward being knocked out of bounds with relative ease for a short gain. He wasn't. Pierson fought off the tackle, slipped past a couple more and turned it up the field for a first down. It was a rare highlight for the Jayhawks on Saturday and it didn't change a thing about the outcome. But it was a subtle reminder about the character and toughness of this senior class, which now has just one game left as a part of the KU football program. Expect a ton of emotion and heart like this to be on display next week in Manhattan. 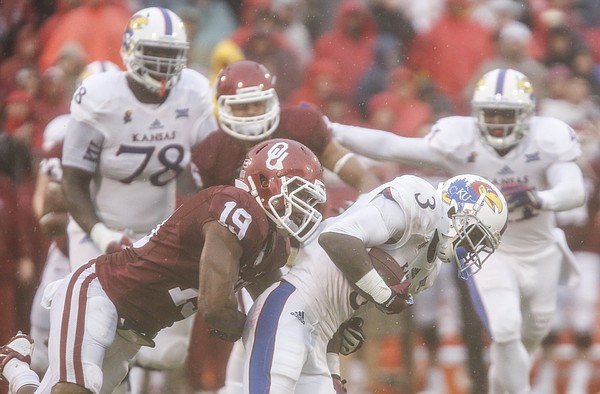 Kansas wide running back Tony Pierson (3) is dragged down by Oklahoma linebacker Eric Striker (19) during the quarter on Saturday, Nov. 22, 2014 at Memorial Stadium in Norman, Oklahoma. by Nick Krug

2 – Freshman running back Corey Avery had a couple of really nice runs in this one and also caught a pass for one of KU's biggest gains of the day. It didn't matter for Saturday's game, but it definitely showed how fortunate KU is to have this guy coming back next season. Avery has been every bit as good as advertised and should only get better. It's not easy for a true freshman to handle so much of the load on a bad team, but Avery has done an admirable job and learned a lot during Year 1 of what figures to become a solid career.

3 – It's hard to know exactly what was going on because the sounds were muffled and I didn't get my own eyes or ears on the situation. But while we were conducting postgame interviews on Saturday, there was some commotion coming from what appeared to be the KU locker room. Lots of yelling, passion and even a little anger were the tone of what we heard and even though there was no way of telling whether it was KU players, coaches , both or even KU people at all who were responsible for all the noise, it was very evident that the Jayhawks were pissed about their play. That should not surprise anyone, but has to be nice for KU fans to hear, given that the tone of the postgame comments was more about moving forward and forgetting about what happened. If the sounds were from Jayhawks, it's clear that they took some time to vent before moving on.

1 – Having an NCAA record set on you is bad enough, but having it done the way it was only makes it worse. Samaje Perine is a heck of a running back and he's got a bright future in the Big 12 and beyond. But most of the holes he ran through were enormous and I think you could conservatively say that most capable running backs in the country would've gained at least 250 yards running behind that same line and through those same holes. The record will live for a while and always be a part of NCAA history. How quickly KU can move past the mental hit of getting blown off the ball all day will determine how competitive they can be next weekend in Manhattan. 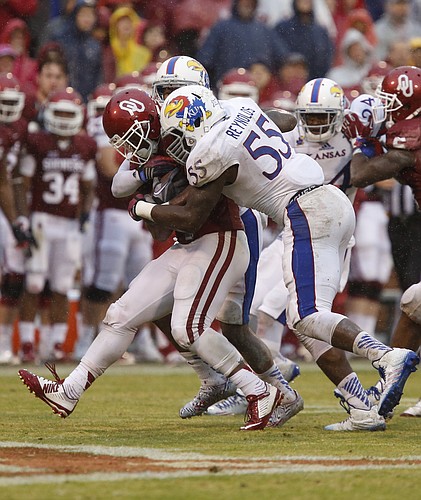 Kansas linebacker Michael Reynolds (55) tries to drag down Oklahoma running back Samaje Perine (32) during the third quarter on Saturday, Nov. 22, 2014 at Memorial Stadium in Norman, Oklahoma. by Nick Krug

2 – KU's O-line play, which had taken a couple of steps forward during the past two weeks, took a major step back on Saturday. Credit OU's D-line and active front seven for a lot of that, but it was still very obvious that the KU O-line no showed. Michael Cummings had guys in his face all day long, the KU running game only had a few moments worth talking about and these guys looked vastly overmatched all day long. Their struggles severely hampered the KU offense and took three of the Jayhawks' best playmakers — receivers Nick Harwell and Nigel King and tight end Jimmay Mundine — almost completely out of the game. 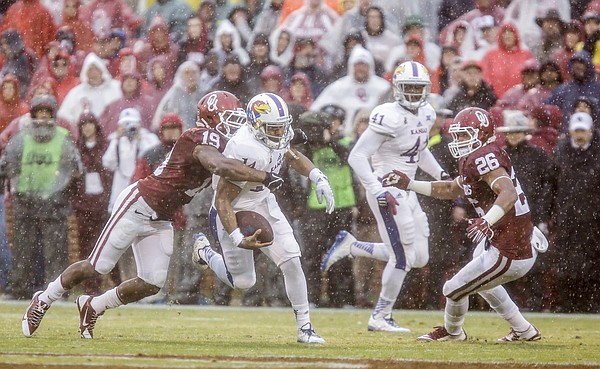 Kansas quarterback Michael Cummings is dragged down short of a first down by Oklahoma linebacker Eric Striker (19) during the first quarter on Saturday, Nov. 22, 2014 at Memorial Stadium in Norman, Oklahoma. At right is Oklahoma linebacker Jordan Evans (26). by Nick Krug

3 – Even KU's punting game was a little rough in this one. Sure Trevor Pardula booted it 11 times for a 41-yard average, but he had one snap zip right through his hands (although the turnover didn't hurt KU) and another came dribbling back to him (which he responded to by fielding it well and bombing a kick). A big theme this season has been the fact that KU just can't make as many mistakes as its opponents because the Jayhawks' margin for error is so much smaller than everyone else. By this point in the season, bad weather or not, those types of mistakes can't be happening.

• Increased a streak of 16-straight losses to opponents ranked in the top-25.

• Prolonged streaks of 29 consecutive losses in true road games and 32 losses in games played away from Lawrence. Kansas’ last road win came at UTEP on Sept. 12, 2009.

The Jayhawks will close out the 2014 season and the interim head coaching era of Clint Bowen with a 3 p.m. kickoff in Manhattan against Kansas State on Saturday. The Sunflower Showdown has been lopsided — both ways at different times — for a number of years and it's hard to know what exactly we're in for this weekend. 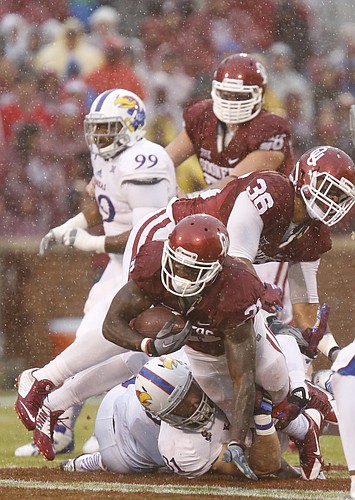 Oklahoma running back Keith Ford (21) dives over Kansas linebacker Ben Heeney (31) for yardage during the first quarter on Saturday, Nov. 22, 2014 at Memorial Stadium in Norman, Oklahoma. Above is OU fullback Dimitri Flowers (36). by Nick Krug

I believe the team has progressed to the point they will play inspired FB in Memorial, but it is another step to take it on the road. We have not played well on the road for the entire year before and after Bowen.

There is a limited amount of improvement in performance we can expect from a staff in 8 weeks during the season. As a result I expect another beatdown at KSU this weekend.

As you have stated, I don't think these past 8 weeks should enhance Bowen's chances or hurt them. None of the other candidates have had the opportunity to coach the team during this time. Therefore, you cannot use that as a barometer or it is unfair to them. At the same time none of them have had the responsibility of trying to compete with Baylor, OU and KSU on the road with this team so that cannot be used against Bowen.

It is all about the final determination of the committee on who can best recruit, condition and develop the roster.