KU QB Cummings playing through pain and proud of it 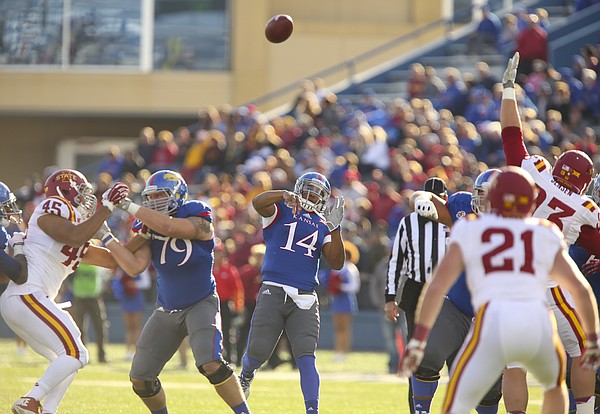 Kansas quarterback Michael Cummings heaves a pass over the Iowa State defense during the first quarter on Saturday, Nov. 8, 2014. by Nick Krug

It's no secret that Kansas University quarterback Michael Cummings has been dealing with some kind of arm issue for the past few weeks, although you'd never know it from watching the guy play.

Series after series, play after play, Cummings has picked himself up off the turf, hustled back to the huddle and called the next play. Teammates occasionally check on him and ask how he's feeling. Junior wide receiver Nigel King said every time he or anyone else had asked Cummings if he was OK, the reply came quickly and usually was short-lived. “I'm OK, I'm OK,” King recalled Cummings saying during a recent game.

Cummings is not interested in focusing on himself or his well-being. He much rather would nod to show nothing's really wrong and move on to calling the next play and leading the offense.

After all, that's what he's here to do, and, pain or no pain, the guy is not about to give in to a little soreness while the opportunity of a lifetime is within reached.

Asked earlier this week how he was feeling physically, Cummings painted a genuinely sunny picture.

Against Iowa State, Cummings momentarily left the game with a right shoulder issue before returning to lead the Jayhawks to victory. Against TCU, the injury — or something like it — popped up again after Cummings plowed in for a one-yard touchdown run.

Despite taking a shot on the play, Cummings said he came away with no bad feelings about another quarterback draw being called in the future.

KU coach Clint Bowen, who called Cummings' physical toughness “underrated,” will be the first to tell you that, at this point in the season, if you've been playing for your team at all, you're going to be a little beat up. A lot of times, what separates those who become players and those who don't is the ability to play through that pain and continue to produce at a high level.

“If you're one of those guys that can't handle that, then college football is a rough business for you,” Bowen said. “And Michael is obviously proving week after week that he's a pretty tough guy, and you know you can count on him to go out there and battle through some of the discomforts that come with football.”

Cummings has done that and takes pride in it.

“I'm not walking around sore all day,” Cummings said. “I think it is just playing through pain. My shoulder was sore, but if they call a pass play, I have to hit it. If not, I need to be off the field. So if I'm out there I'm gonna do whatever the play calls me to do.”

Got to love Cummings. Everything that dude has been through with being pushed to the side and coaches favoring other quarterbacks. Cummings is my favorite Jayhawk.

So the two linemen in the left on the picture look like they're dancing...