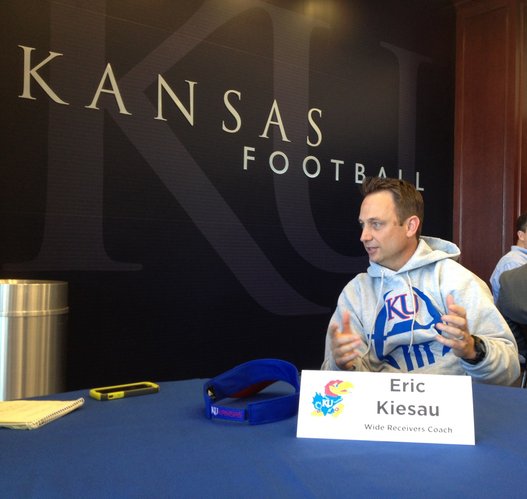 KU wide receivers coach Eric Kiesau talks with the media about what brought him to Kansas and his excitement about the start of spring practices, which kicked off Thursday, March 6. by Matt Tait

No open practices this spring for the Kansas football program, so the "What caught my eye" blogs of the past are going to have to be replaced by these "What caught my ear" blogs until we can see these guys play for ourselves.

I should be able to bring plenty of information to the table, I just won't be able to get much of a feel for the physical abilities and make-up of the players and the team dynamic. No sweat, though. It's still just spring.

With that said, four members of KU coach Charlie Weis' staff were made available to the media today and each made it incredibly clear that they're ready to go.

I spent most of my time with Kiesau, who impressed me a great deal. I like his attitude, I like his philosophies and I like that he seems fired up to be here. I'll have a story on him in tomorrow's paper (and online) so be sure to check that out.

With that in mind, here are a few other tidbits from the day that caught my ear...

• Campo said it's great to go into a spring knowing your personnel and having seen what they can do…. Said they feel good about KU's secondary because so many guys who played well last year are returning this year.

• Bowen said he and the staff have a much better grasp on who the leaders of the D will be this spring vs. last spring. Mentioned specifically Ben Heeney, Ben Goodman, Cassisus Sendish and Isaiah Johnson. And there's no doubt that Keon Stowers is a part of that group, as well.

• Bowen also said having a year of the defensive system that KU runs under their belts & in place gives players & coaches a lot of confidence and allows them to start the spring way ahead of where they started last season with installation and things basic philosophies.

• Kiesau said the process of getting hired by KU was a whirlwind and came, pretty much, in one day. He visited campus right before a family vacation to Hawaii and liked what he saw. Also admired Weis and Reagan and wanted to work with them.

• Kiesau said has 3 key things he likes in WRs: 1. Natural hands. 2. Precise route runner. 3. Able to release at the line. There's a lot more that goes into coaching the position than that, of course, but those are the things he looks for first.

• Even though everyone and everything here is new to him, Kiesau said he was going to set the bar very high & push and inspire the KU WRs to catch up to that standard. Sounds like a sound approach and won't allow for much wasted time.

Here's a quick video that Benton Smith of Smithology and Hawks in the NBA fame threw together from today's availability...

I really don't think that any of our WR's have stone hands. By this point in their careers all of these guys have shown that they can catch a football. The question is whether they can catch it in game conditions.

Lack of focus and hearing footsteps are the more likely problems. Coach Kiesau might be able to do something about those issues.

I certainly don't think anyone has shown they can catch. Not consistently, anyway. I don't think any of them have demonstrated they can make the tough catch, or make one in clutch situations. Heck, Id even settle for normal passes in normal game situations. If they've shown it, it hasn't been in a KU uniform while being defended.

I'm with Mark and Joe. When the receivers could get open, which wasn't often, they couldn't catch. McKay especially surprised me. He caught everything thrown his direction in the spring game, and then never showed up in real games. Maybe you have a point Michael. Maybe they're decent practice players and can't do anything when it counts.

With that said, I expect big things from McKay, Harwell and Coleman this year.

I'm back, a hopeless KU football fan! A new year. A fresh start. The past doesn't matter. THIS IS OUR YEAR!!

More depth. More focus at problem positions (WR and OLine). New offense. All this makes us harder to gameplan from last year's film. I'd have to call the Defensive scheme a success, but simply lost under the ineptness of the offense not able to stay on the field. If an opposing coach studies tape of our offense, they will see drive after drive killed by our own drops.

Keep working on the special teams...we make just an incremental improvement from last year, that 1/3 of the game should be decent.

I'm hoping for .500ball. Which means bowl-eligible. Lets see how we do, RCJH!!