Wiggins' Monday announcement won't surprise but will be meaningful 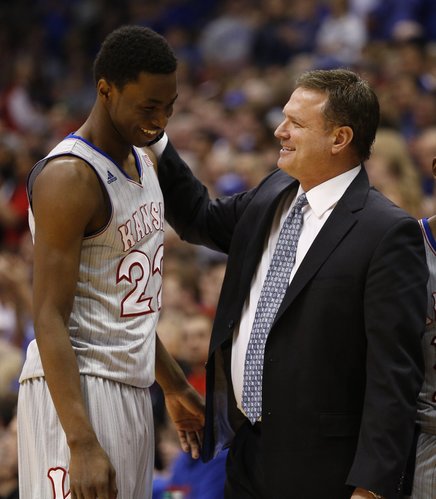 Kansas head coach Bill Self smiles and gives a pat to Andrew Wiggins after pulling him from the game late in the second half on Wednesday, March 5, 2014 at Allen Fieldhouse. by Nick Krug

So 2 p.m. central time Monday (or today, depending upon when you're reading this) is the official time for the announcement we've all known was coming since last May.

All signs point to Kansas University freshman Andrew Wiggins being headed to the NBA.

Almost everyone I know, along with many of you I don't, accepted this fact a long time ago and most people did not have much issue with the fact that Wiggins' time in Lawrence was going to last one season, win, lose or draw.

So here we are at the end of the road. All that's left to do now is make it official, which Wiggins will do at Allen Fieldhouse on Monday next to head coach Bill Self, who likely will be sitting there with one heck of a smile on his face.

For all of the things Self does well, this is one of his more underrated areas of strength. Never does he make a young man's decision to stay or go pro about him or the program or winning. It's always about the kid. And even if Self really is sad to see a guy go, you'd never know it on announcement day.

Today's press conference is as much for Self and KU as it is for Wiggins. Sure, Wiggins has to make his intent to enter the draft official, but he could do that in a statement or even a phone interview. Having him sit in the Allen Fieldhouse media room one more time, in front of the Jayhawk backdrop, with all of the local media there is nothing but good news for Kansas and its future recruiting.

It'll probably last about 10-15 minutes and Wiggins will gush about KU, all he learned while he was here and why Kansas was absolutely the right school for him to choose. The best part about it is it will all be very genuine. Everything about Wiggins has been since the moment he first stepped on campus and I can't see him going out any other way.

Future one-and-dones will be listening and watching, and even if they're not, they'll surely read or hear his comments at some point in the near future. Whether they realize it or not, Wiggins' words will stick with them in some manner.

There was a time when these things felt a little strange at KU. People still held out hope that the announcements would favor KU and shock the world. These days, they're old hat, as common as listening to Self stress how tough winning the Big 12 yet again is going to be at the beginning of a new season.

Monday's announcement will favor KU, but not because a superstar is sticking around. It will favor KU because that superstar will say everything Self and the program need him to say on his way out the door — and he'll mean every word. 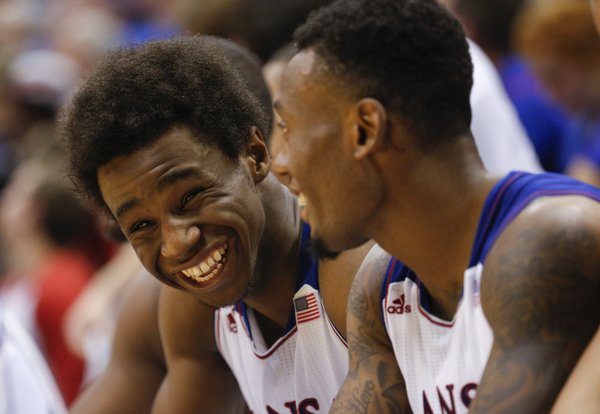 Kansas guards Andrew Wiggins, left, and Naadir Tharpe laugh on the bench during the second half of an exhibition game on Tuesday, Oct. 29, 2013 at Allen Fieldhouse. by Nick Krug

When the press conference was announced late Sunday night, I posted on Twitter the details and told my followers I'd let them fill in the rest... Here's a quick look at some of the best and most laugh-inducing responses:

• Mission trip then back another year....

• Skipping the NBA draft to go barnstorming with Niko, Tarik and Justin obviously.

• Maybe he will say he's no where near ready for the NBA... Lol and his teammates as well

• Self is going pro and Wiggins will coach through graduation?

• The Decision Part II. Why isn't ESPN televising this? 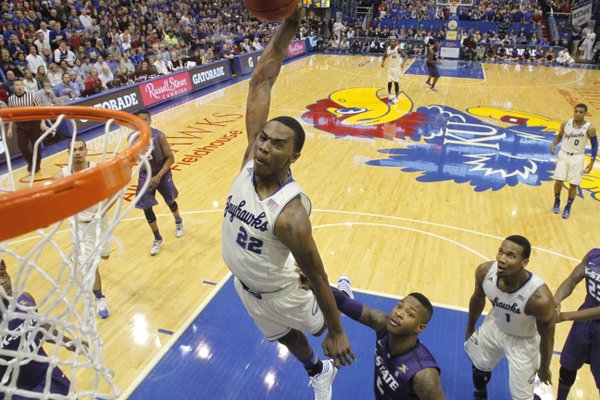 Why not wait until the NCAA season is over? This "look at me" press conference is a distraction and disrespectful to the teams of the Final 4.

PS - He's no where near ready to make any kind of impact in the NBA. I'm so done with the one and done NBA rule.

They don't even play until next weekend. How is a 15 minute press conference on a Monday afternoon a distraction and disrespectful? That doesn't even make sense. Not to mention the fact that the entire basketball world has known this since he came to KU - it's not like it's a big shock.

It's not like we're playing in the Final Four. Why do we need to worry about distracting/disrespecting the other teams that are playing? Our season is over, so it's time to move on to next season for us.

This is no big deal. Non-issue. If you read Tom K it is more of a quick celebration and good bye to a great player. I was concerned at first but now I get it. Timing is even right, announcements are happening everyday on players so today is fine after all the games are over.

One of those teams in the Final Four has a coach who write the book on "Look At Me!" Ironically, his team will take more coverage away from the other Final Four teams than KU's piddly little press conference will.

Trust me, the NCAA Final Four will not want for coverage. ESPN will make sure it's nonstop, especially now that Kensucky is there.

Matt, will there be a live stream of the announcement?

He's obviously one and done but at the same time he's been a terrific ambassador for the University of Kansas. What a terrific young man. His parents deserve a "well done," as well. I'd love to see him stay another year but, whether he does or not, I'm glad he's a Jayhawk. I wish this young man a successful future.

When TRob and BMac made their announcements to leave for the NBA, I was extremely happy for them. Wiggins falls into the P.T. Barnum / Walt Disney category of "Always leave them wanting more."

I truly wish Wiggins (and Embiid) the very best but will always look back to this year grateful for their contributions to the 10th Big 12 title but with 10 losses and a round of 32 exit as the year we "wanted more."

Agree 100% - the way we finished, and watching all these great guards lead their teams to the final four, I think our issue was not with Andrew and Joel as much as with some others on the team. I know this sounds spoiled but this season was just not up to our standards.

Here is how I would complete it... He will announce that he is going to play for the football team as a TE!

fail is a very bitter word. Yes Wiggins didn't score well his last game, but he played solid D. Without Embiid, we might have not won the conf for a 10th year. Heck without either guy we don't win it. But yes call them failures.

In David's defense, he was talking about "Embed." He didn't say anything about Embiid. So I agree with David, I'm glad Embed is leaving; he didn't do anything for us this year. Embiid had a good year, but Embed sucked - he definitely won't contribute in the NBA. (True fan right there, David Brown.)

If you don't even know how to spell the players' names, I put very, very little stock in your opinion.

That out a 25 million dollar injury policy and let the kid play basketball with his college mates. I am happy for him but you are only young once and he is going to miss so much "FUN" he can never get back .. Best wishes Andrew you deserve the best and I am sure you will do great.

Frankly, I don't think any college player is ready for the the grind of the NBA. I don't care if it's a OAD or a Fifth Year Senior.

However, it will be relatively easier for Andrew to adjust since he will play a postition with relatively large spaces. Jo Jo, on the other hand will be in the paint where he will be battling and banging virtually every minute of his playing time while playing three times as many games as he played in a college season.

Andrew Wiggins declaring for the NBA?? NOT A SHOCK!

Jo Jo Embiid NOT declaring for the NBA?? Maybe not as big a shock as it first seems!

As physical as the game is these days, I'm not sure the pros are even ready for the NBA grind.

Not sure what is being celebrated here. Did not have a great season in the end. In the 10 years of a conference championship, only made 2 final fours and one ncaa championship. We have had most of those years at least a top 5 team. This has occurred with or without a OAD player. I will be ready for next season. Put this season in the books and move on.

Just to clarify, KU made it to two championship games; won one. and 'only' is something that only about 5 other programs can say they accomplished in the same time frame. Certainly would rather have that number higher, but we're spoiled.

But those 5 other programs have done BETTER is my point. I do not really put credibility in one and done players. And certainly do not think that Andrew Wiggins had the stellar freshman year that he could and I will say should of had.