The Day After: A sad Saturday at Oklahoma State 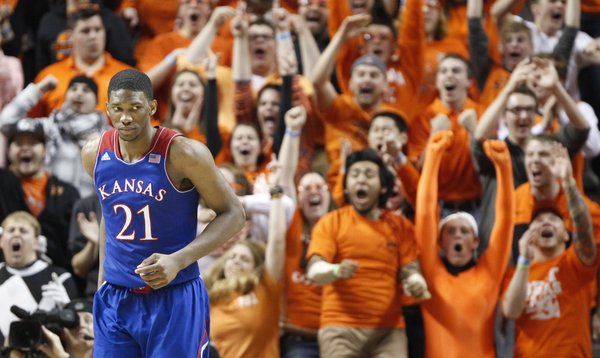 The Oklahoma State student section explodes behind Kansas center Joel Embiid following a bucket by the Cowboys late in the second half on Saturday, March 1, 2014 at Gallagher-Iba Arena in Stillwater, Oklahoma. by Nick Krug

It's hard to imagine that the day after this one was anything but somber for the Kansas University basketball team, which clinched the outright Big 12 title thanks to losses by Texas and Iowa State, lost at Oklahoma State after holding a 10-point lead midway through the second half.

No celebration. No elation. Just disappointment over a loss that should have never been, one that featured 22 turnovers, ugly point guard play and an inability to make plays down the stretch.

Of course, to put it all on KU would be unfair to Oklahoma State, which played hungry and desperate and got excellent contributions from Markel Brown, Le'Bryan Nash and especially Marcus Smart, who poured in 20 points in the second half.

The loss dropped Kansas to 22-7 overall and 13-3 in the Big 12. But with a three-game lead over four teams and just two regular season conference games to play, the conference title is KU's outright, even if it didn't quite feel like it on Saturday night.

As poorly as KU played at times in Stillwater, and as much as it probably stung to give up a 10-point lead the Jayhawks worked hard to build, the latest outcome was not a total disaster. Oklahoma State has talent — a lot of it — and had a lot to play for, its postseason life and one more show for the home fans at the top of the list. Beyond that, the Jayhawks' bottom line didn't really change after this loss. They're still on pace to be a top seed in the big dance — a 2 or even a 1 still seem most likely — and they are the top seed in the upcoming Big 12 tourney, which will follow games at home against Texas Tech and at West Virginia. Don't get me wrong, if KU plays, and especially closes games, the way it did on Saturday, a deep postseason run will be in jeopardy. That's the bigger question at this point, but given the way these guys have performed all year, a bounce-back seems more likely than a collapse. 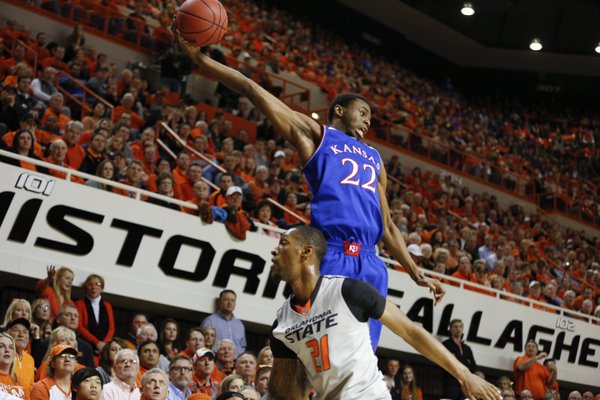 Kansas guard Andrew Wiggins tries to save a loose ball from going out-of-bounds over Oklahoma State forward Kamari Murphy during the first half on Saturday, March 1, 2014 at Gallagher-Iba Arena in Stillwater, Oklahoma. by Nick Krug

1 – Andrew Wiggins had an off night shooting the ball from the outside and couldn't get much to fall in close either, but he competed his butt off especially on the glass. The one scrum midway through the second half where KU came away with three loose balls or rebounds in the paints and Oklahoma State kept turning them away was a perfect indication of just how hard both teams played and wanted this one. Wiggins wound up at the free throw line and pushed KU's lead to 52-42. Things slowly went downhill from there, though.

2 – KU's first-half defense was pretty fantastic. And tough. Oklahoma State made just six field goals during the game's first 20 minutes and had just one player with more than one bucket at the break. What's more, the lockdown defense came when KU really needed it. Behind three early buckets from Le'Bryan Nash, Oklahoma State had jumped out to a 14-7 lead and, with KU's offense struggling, was in position to create some serious distance between the home team and the visitors on the scoreboard. But the Jayhawks locked in — especially on sharp-shooter Phil Forte who was 1-of-4 in the first half and 1-of-6 for the game — scrapped their way back into it on the offensive end and led 26-25 at halftime despite shooting just 35 percent themselves. 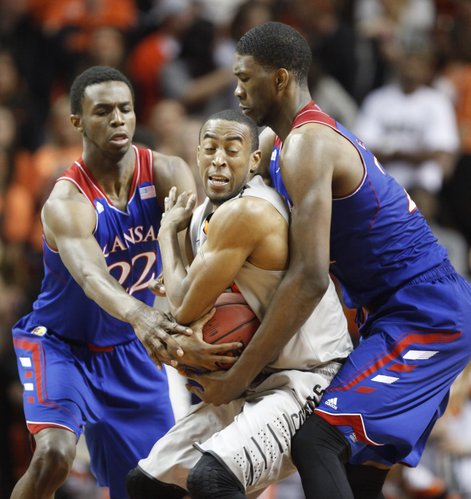 Kansas player Joel Embiid, right, and Andrew Wiggins try to tie up Oklahoma State guard Markel Brown during the second half on Saturday, March 1, 2014 at Gallagher-Iba Arena in Stillwater, Oklahoma. by Nick Krug

3 – Had it not been for offensive rebounds, the Jayhawks might have been blown out of the gym. KU outdid OSU 15-3 on the offensive glass, which led to a 13-4 advantage in second-chance points. Two Jayhawks (Perry Ellis and Andrew Wiggins) had more offensive rebounds (5) than all but one of the OSU players had in total rebounds.

1 – Foul trouble was a big factor in this one and the Jayhawks were guilty of a lot of hacking. That led to 33 free throw attempts for Oklahoma State, which cashed 27 of those, and OSU outscored Kansas by 13 points at the free throw line. Not only that but Wiggins and Joel Embiid both had to sit for a stretch in the second half with three fouls. KU's reserves did a nice job during that stretch but you can't help but think that seeing those two sitting instead of trying to throw the knockout punch helped Oklahoma State believe they still had a shot. 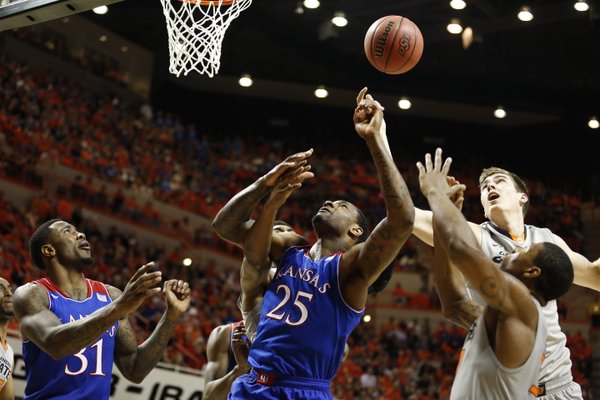 Kansas forward Tarik Black tangles in the paint with Oklahoma State defenders Mason Cox, back right, and Marcus Smart during the second half on Saturday, March 1, 2014 at Gallagher-Iba Arena in Stillwater, Oklahoma. by Nick Krug

2 – When KU didn't foul, they gave up some pretty high-percentage shots, especially in the second half. Much of Oklahoma State's run that brought the Cowboys back from 10 down and eventually pushed them over the top came on the strength of free throws or buckets at the rim, a few of them real crowd pleasers that only added to OSU's ability to overcome that double-digit deficit. The Cowboys shot an incredible 64 percent in the second half after shooting just 24 percent in the first.

3 – Naadir Tharpe proved once again just how important he is to this team. Unfortunately for the Jayhawks, the junior has proven it almost as often with poor performances as he has with good ones. Saturday's was certainly a poor one. Tharpe's had plenty of games where he didn't shoot well but still found a way to positively impact the game with leadership, passing and, occasionally, defense. None of those were working against the Cowboys, as Tharpe finished with six points, six turnovers and five assists. He made a couple of plays, but generally looked frustrated, overwhelmed and out of sorts all night.

• Gave KU the outright Big 12 regular-season title, the 10th-straight crown for the Jayhawks and the 14th in the 18-year existence of the league. Overall, Kansas has collected 57 conference titles, the most in NCAA history.

The Jayhawks return home Wednesday for a rematch with Texas Tech at 8 p.m. at Allen Fieldhouse. KU survived a scare from the Red Raiders two weeks ago in Lubbock, Texas. Before the Senior Night game, the Jayhawks will recognize Tarik Black, Niko Roberts and Justin Wesley. 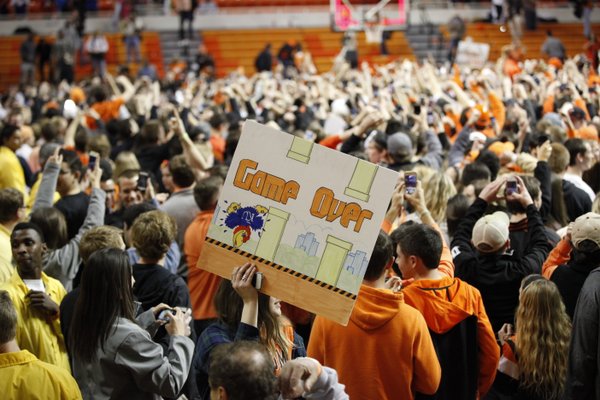 An Oklahoma State fan hoists a sign celebrating the Jayhawks' demise on Saturday, March 1, 2014 at Gallagher-Iba Arena in Stillwater, Oklahoma. by Nick Krug

My main concern now is the health of Joel Embiid. I would strongly consider sitting him against Texas Tech on Monday so that he can have time to rest up for Saturday's tilt at West Virginia. KU has enough talent on their squad to give extra minutes to Landen Lucas and Brannen Greene as we will need all the help we can get come Big 12 and NCAA tournament time.

One more reason to smile: Tarik is a monster truck! He should keep driving at that high speed. Nobody will be in his way after looking at how painful and pitiful Nash down on the floor like that.

While it's true that Tharpe's play has been dramatically, and critically inconsistent this season ~ especially so, playing such an important position ~ it is also true that the exact same thing could be said for literally every other player on the team. I suspect that is, and could continue to be the Achilles Heel for this group of players. Must be a difficult situation for everyone, including Coach Self. I have heard him say that this team isn't strong or tough enough ~ "it just isn't who they are." Talent has allowed them to win some games in which they didn't play well for much of the game. Unfortunately, it appears that pure individual talent cannot overcome inexperience in developing a team that can play a complete 40 minutes when required. The Duke and Texas games provide a good look at what this team is fully capable of from a talent perspective. Too many other games reveal what having virtually no "game minutes playing time" experienced players returning can sometimes produce.

wow, lots of gloom and doom on the boards today. 22-7, Big 12 champs by three games with 8 freshmen, 1 soph, and 1 jr. Could be worse. Self was right last fall, this team has been fun and frustrating to watch. Look back at the year, though, not a single "bad" loss on their resume. Last night did not end/ ruin their season.

I won't sigh too much, but so far, our stats are not that far from Villanova or Florida. We're better RPI-wise, and in some other stats. I'm not too concern about this team. It's just I wish we have a descent 3pt shooter and I wish Frankie coming out of his cave, proved himself to be as good as he had been advertised. This is what we've been missing, a damned good 3pt shooter (Ellis should be given a go to keep taking it, he's been so far the most effective 3pt shooter, believe it or not).

I suppose that I am an eternal optimist.

I think getting brought back to earth before the tourney is a good thing. It seems like the higher the AP rating for this team, the worse the performance.

I do not foresee a number 1 seed with this many losses. I think our best hope is a 2 seed and that will require winning the next two games and at least making the finals of the Big 12 tournament.

Finally Self has to come up with a trick defense that can cover up for poor point guard man on man defense for when we encounter a team with great guards.

Check out Mark Cuban's comments regarding NBA D-league better for the one & done kids. http://espn.go.com/dallas/nba/story/_/id/10538276/mark-cuban-says-nba-d-league-better-option-ncaa

Nice try on the article Matt, but this game stunk. You can't hide that but kudos for putting a good spin on it. The bottom line is that the Jayhawks played poorly and played their hearts out; the Pokes played their hearts out and squeaked out the win. The wheels came off the bus with really poor PG play. The lead guy has got to lead and do it well in order for the team to run like a machine. Everyone has to step up and kill those stupid turnovers!

I like this rivalry better than KSU. This series is more even.

When you go all in on one PG you must live or die ( like Michigan last year ) when your point guard plays poorly. It's sad, imho, that Conner Frankamp didn't get more time at the point this year. Yes, he is young and yes he is inexperienced, but that kid can shoot and we need a point who can come in and shoot the ball when he's open with a reasonable chance of making it. HCBS has said " When he's open he's in the game to shoot it" Every defense we play packs it in until we prove we can make outside shoots. Forcing the ball into that defense just leads to TURNOVERS time after time. Conner has proven his is an excellent ball handler, he could be the key outside guy who we need when Tharpe is not having a good game.