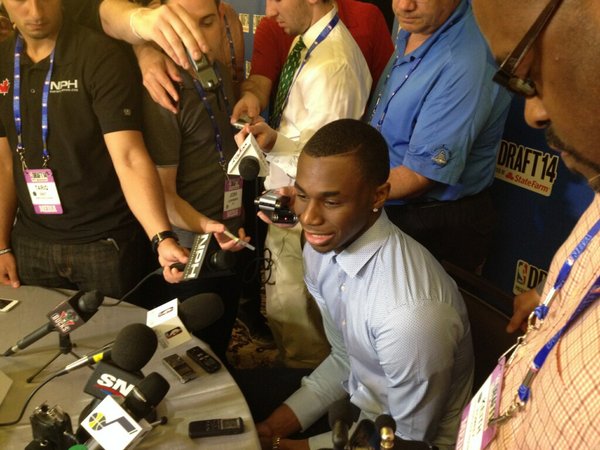 One-and-done Kansas University basketball player Andrew Wiggins meets with members of the media Wednesday in New York, the day before the 2014 NBA Draft. by Matt Tait

Here are the photo highlights from Wiggins' trip to a local school for an NBA Cares event.

Andrew Wiggins heads out to greet the kids at PS III in Manhattan... Gonna be here playing around for about an hour pic.twitter.com/ycQ2JkrWlw

Wiggins found himself at the jump rope station and got pretty competitive. pic.twitter.com/eAvslj3sPm

Wiggins got into the spirit of the summer meals program associated with the NBA Cares event... pic.twitter.com/GabfO6kuvM

Wiggins (left) & Jabari Parker (right) rush the good truck after the NBA Cares event. No word on who got 1st pick... pic.twitter.com/NL3OThAKZJ

Wiggins going toe to toe with the best jumper in the group... pic.twitter.com/eR2XNrxGgb

Perfect picture to describe Wiggins' demeanor all day. On the eve of a major life event & enjoying every minute of it pic.twitter.com/Ja0gkUDgIM

As high as Wiggins flies on the basketball court, jumping rope didn't seem to be part of his regimen — at least not with a rope that short.

About to hey started here at PS III in Manhattan and I was just told that the mayor of NYC will be here to give a speech to the kids and athletes before we get started with the hoops stuff. That explains the extra police presence.

Public school in Manhattan where Wiggins, the NYC mayor and more will be hanging with some locL kids for a while... pic.twitter.com/zjAwjRJnjT

We've arrived at PS 111 in Manattan, where Wiggins and other likely lottery picks will meet with some local kids for an NBA Cares event that includes handing out food from a food truck, a Q & A session and, of course, basketball.

This is always one of the best parts of the draft experience for these guys, many of whom are a little surprised by how much they enjoy the interaction with the kids.

This part of draft experience is always a hit w/ future lottery picks. gets minds off of craziness going on around... pic.twitter.com/gxru9GW9qU

Seems to me like this kind of thing is tailor-made for Wiggins, a big kid himself, and we'll have plenty of photos and videos from his time with the kids. It's a hot day in NYC, and we're on some old school blacktop.

Andrew Wiggins hops on a bus bound for an NBA Cares event in Downtown Manhattan. pic.twitter.com/vaYWLJDjQs

Jabari Parker and Wiggins were in the same media session, so it was tough to get to them both. I did hear some things from those who spent some time with Parker that seemed to indicate he believes he's going no. 2.

Wiggins was asked about that and didn't have much to say. As of this afternoon, he still said he had no idea what would happen and went out of his way to emphasize that he understands that anything's possible.

That said, he also made no secret of the fact that he wants to go no. 1 — badly. That's just what being a competitor has done to him, he said. "I don't want anyone to be picked ahead of me."

Something that caught me off guard that shouldn't have was the amount of Canadian media here today and number of Canada questions Wiggins was asked.

The young man is proud of his country and really seems to understand that his place in this draft is about much more than one kid. It's about an entire country trying to make more of a name for itself in the NBA world, and Wiggins seems like a fantastic ambassador.

He was as relaxed and comfortable today as I've seen him all year and really seems to be enjoying the moment and soaking up the whole experience.

Wiggins, wearing a light blue, form-fitting shirt, navy slacks and a huge smile, just fielded 30 minutes worth of questions from the media here in NYC.

The most asked questions of Wiggins during the session were:

2. Why do you feel you're ready for the NBA?

3. Specifics inquiries about individual workouts. Curiously, there was not a single mention of Milwaukee, which picks second. Plenty of inquiries about Cleveland at No. 1 and Philly at No. 3, and even one about Toronto at 20 (go figure), but not a peep about the Bucks.

Sounds to me like Wiggins really liked Cleveland and wants to go there for more than just the prestige of being the top pick...

I also snagged Wiggins before he began the Q & A so he could give a message to the KU fans out there.

Just arrived at The Westin Times Square and it's about go time for Andrew Wiggins. He'll be talking in the first group at 11:30 and will be buried in the back right corner of the ballroom. Gonna have to elbow my way in for a good spot.

The media horde waiting for Wiggins... And he thought KU interviews were packed. pic.twitter.com/zTvbl0Bntf

Dozens of autograph seekers are on the corner of 43rd Street & 8th Avenue and you can bet Wiggins will be a much sought after signature.

He signed for an hour last night at Champs in Times Square and it will be interesting to see where his energy is today.

Stay right here for photos, sound bites and anything else Andrew Wiggins from NYC today. As you surely know, Joel Embiid is not here today.

Wiggins in the first group in about 30 minutes... Was hoping he & Smart would be different times. Here we go! pic.twitter.com/qtUZ1SyIoA

Just got to NBA Draft HQ & caught up w/ scribes from Cleveland. No surprise but they all say it's Wiggins or Parker @ 1 but don't know which

Several months worth of speculation, waiting and wondering have brought us to the final day of anticipation.

By this time tomorrow, former Kansas University freshmen Joel Embiid and Andrew Wiggins will have done all they can do to convince their potential future NBA destinations that they are the right guys to pick in this year's NBA Draft, which is set for 6 p.m. Thursday night at the Barclay's Center in Brooklyn.

Heading into today, what will happen at the top of the draft seems very much up in the air still. Wiggins is still alive to become the No. 1 pick and, thanks to a foot injury late in the draft preparation process, Embiid appears to be out of the equation.

Then again, it is the NBA Draft, where rumors, wheeling and dealing and all kinds of craziness can take place right up until the last minute.

Some, like our own Tom Keegan, believe that all of the talk about Embiid being out of the mix for the top pick is just talk and that there might be a team or two still willing to take him there. Others believe that No. 1 position will come down to a choice by Cleveland between Wiggins and Duke's Jabari Parker.

All three players have been part of the so-called “Big Three” throughout the months leading up to the draft, and, on Tuesday, Parker seemed to be the guy who many experts thought was going to be this year's top dog. But by late Tuesday night, the tide had begun to swing Wiggins' way again and, as it stands now, I think that's where the Cavs will go. I know I would.

It's too bad, too. Because if Embiid had not injured his foot, he likely would have been the clear-cut top pick and there likely would be a lot more order in this whole thing than we currently have. Then again, it's the draft and chaos is part of the fun.

As has been the case for the past four years, I'm out here in New York City ready to track Wiggins' throughout his final day as an amateur athlete. There's media availability at the Westin Times Square scheduled for 11:30-12:30 and I'll do whatever I can to track the guy for a couple of stops after that.

So stay logged on to KUsports.com and this blog throughout the day for videos, photos, quotes, updates, Tweets and all kinds of color from the Big Apple. Embiid's not here, but I'm sure his name will come up a couple of times somewhere along the way.

In case you've missed our draft coverage leading up to today, here are a few links to get you going while you wait for the action to get started out this way.

Column: This year could make memories of No. 1 at NBA Draft by Matt Tait KUsports.com

The curse of the NBA big man always affects drafts

Gary Bedore's update on Tarik Black's chances in the draft

NBA teams get a look at Tarik Black before draft by Gary Bedore KUsports.com

NBA Draft to have Kansas flavor by Gary Bedore KUsports.com

Self optimistic about Embiid’s NBA future by Gary Bedore KUsports.com

Blog Central.... Finally, blogs galore that have tried to track all of the rumors and jockeying for position leading up to the draft

Double Chin Music — Embiid worth the risk for Cavs
http://www2.kusports.com/weblogs/tale-tait/2014/jun/20/foot-injury-sends-joel-embiid-falling-in/

All Eyes on KU — Cavs torn between Wiggins and Parker; more on Embiid's health comes out
http://www2.kusports.com/weblogs/all_eyes_ku/2014/jun/24/cavs-torn-between-wiggins-and-parker-mor/