16 years later, Paul Pierce falling to No. 10 remains a mystery 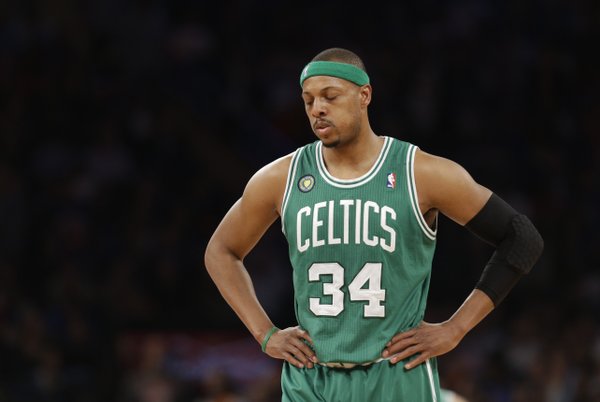 Boston Celtics forward Paul Pierce (34) reacts in the first half of Game 5 of their first-round NBA basketball playoff series at Madison Square Garden in New York, Wednesday, May 1, 2013.

To this day, many people (myself included) are still trying to figure out how in the heck the Boston Celtics ended up getting Paul Pierce with the No. 10 pick in the 1998 NBA Draft.

Pierce, then a junior who lit up the Big 12 at KU and was one of the best scorers in the nation, was pencilled in as high as No. 2 or 3 in many mock drafts and seemed to be made for the NBA, where size, the ability to fill it up from the outside and versatility stand as most important above all.

But there Pierce sat on draft night, falling a little more with every pick. It's hard to trust the mock drafts. They're almost never right and they're definitely never completely right. So Pierce falling from 2 or 3 to 5 or 6 would not have been that big of a deal.

But 10 seemed insane. Still does. As you all know, the guy went on to become one of the greatest Celtics of all-time and is still doing it, albeit at a little slower pace, with the Brooklyn Nets.

Who knows how things would have gone if Pierce had been taken No. 3 by the Nuggets or No. 7 by Sacramento? Maybe he needed that snub to push and inspire him to become the all-time great that he is. We'll never know. What we do know, though, is there are a lot of teams that regret passing on him and such fate can befall any team any year when it comes to the NBA Draft.

Here's a quick look at the Top 10 from 1998 NBA Draft for your viewing (and laughing?) pleasure:

Jamison and Carter had great careers and were fantastic college players so it's hard to say those were bad picks. And Nowitzki's a Hall of Famer. Other than that, though, you could say that every other team in the Top 10 completely blew it by passing on Pierce.

It's funny, too, because the three teams that ended up with the three best players (Carter, Jamison and Dirk) other than Pierce in that draft didn't even draft those guys. Crafty moves by the GMs of those squads and utter failure by the GMs of the others.

There's a nice feature about the former Jayhawk falling to No. 10 on Pierce's web site right now... It's title tells it all: "The 1998 Draft Heist." It includes some great insight from the Celtics in charge of pulling the trigger on Pierce.

Maybe the best producing Jayhawk of them all. It's a case of the quintessential underestimation by others that, like so many of Kansas' attributes seen from outside, sets the stage for The Truth to shine through undeniably. Who else can walk through walls like Paul?

Should have won the NC his junior year. Then he would have been a top 3 pick.

Agree he should have gone #3. Isn't it interesting how most of the teams in the lottery are the same ones in this upcoming draft. Just shows you how hard it is to judge talent.

We can all be thankful that he didn't end up with the Clippers. Imagine how miserable he would have been having to play for Sterling.

What a draft day for the Mavericks.. traded the rights to Tractor Taylor (RIP) for Dirk...and later drafted Pat Garrity and traded his rights to Phoenix for Steve Nash.