The Day After: West Virginia

Kansas guard Andrew Wiggins puts up a shot against the West Virginia defense during the first half on Saturday, Feb. 8, 2014 at Allen Fieldhouse. by Nick Krug

After a 1-1 road trip through Texas, the Jayhawks returned to the friendly confines of Allen Fieldhouse on Saturday and came away with a hard-fought 83-69 victory over West Virginia.

The game was much closer and tougher than the final score indicates and the Jayhawks (18-5 overall, 9-1 Big 12) made several winning plays at crucial moments to hold off the hot Mountaineers.

A big reason for that was KU's bench, which simply threw too much depth at West Virginia and helped the Jayhawks hold off a WVU team that just kept coming.

Given the final score and where the Mountaineers have been in recent years, those who didn't watch the game will likely think it was just another easy win at home for Kansas. Those who watched it know otherwise.

Credit Andrew Wiggins for being the difference maker in this one. That may be obvious given his 19 points, but it wasn't as much his stats that impressed me as it was his mindset. He was aggressive and in attack-mode on both ends from the jump and really put the pressure on West Virginia's defense while taking the pressure off of his teammates at the same time. Jamari Traylor and Tarik Black were great in relief of Perry Ellis and Joel Embiid, but Wiggins had a lot to do with KU's huge advantage in points in the paint, as well. West Virginia's the kind of team that could've caused KU trouble, but the Jayhawks played to their strengths and got an A-performance from their best player.

1 – Tarik Black may have taken a little while to find his role but he has definitely found it and is playing it perfectly. In 21 minutes against WVU, Black made all three shots he attempted, his 5-of-7 free throws and grabbed four rebounds while scoring 11 points. He also recorded four fouls, only one of which was that old Tarik-can't-help-but-foul style that delayed him from settling into his role. Black plays like a man who knows what he's supposed to do, and, better yet, he often does it well. His post moves look smoother and are becoming more effective, which makes him more than just another big body. Gifted with a great attitude and improving skills, Black is the kind of guy with whom teammates like to play. 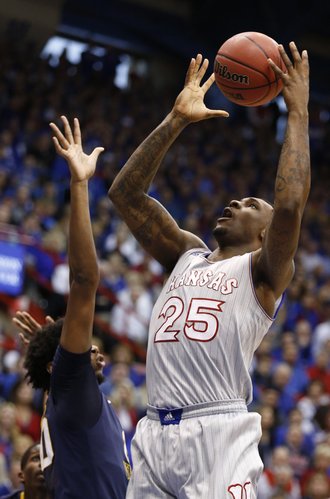 Kansas forward Tarik Black gains control of the ball before a shot over West Virginia forward Brandon Watkins during the first half on Saturday, Feb. 8, 2014 at Allen Fieldhouse. by Nick Krug

2 – After dotting the Jayhawks for 22 points on 6-of-9 shooting in the first half, KU tightened up its defense on WVU guards Eron Harris and Juwan Staten and forced them into enough tough shots to change the game. Even when Staten and Harris did score, it came on tough buckets or at the free throw line. Andrew Wiggins spent most of the game guarding Harris and, after letting him get loose for three straight three-pointers in the first half, took it as a challenge to make life tougher. He did. And it was the perfect tune-up for what Wiggins figures to see from K-State guard Marcus Foster on Monday night.

3 – Speaking of Wiggins, if this is the only season we'll get to see him in Allen Fieldhouse, I think we should all enjoy the little things he does a little more and worry less about his shot or the bottom line of his final statistics. The guy is an amazing athlete and, on a nightly basis, does a handful of things that you might never see again. One such play came late in the first half, when Wiggins drove to the rim and was bumped into a fade-away jumper in the paint by the WVU defense. They could have called a foul but didn't. That's not the point, though. Despite, being forced to fade away from the rim as he shot, Wiggins still was the first guy to get his hand on the ball as it bounced off the rim. That's scary quickness. And, perhaps more importantly for KU fans, that shows just how driven and competitive this guy really is. Forget how hard he plays or what he looks like when he's out there doing his thing, it's these kinds of things that make NBA general managers salivate over Wiggins and his potential. 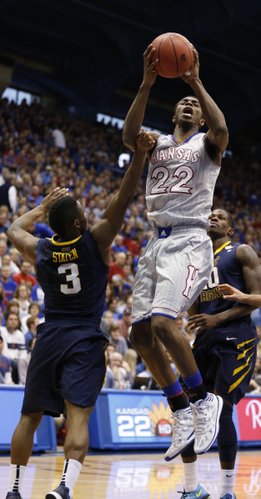 Kansas guard Andrew Wiggins hops into the lane for a shot against West Virginia guard Juwan Staten during the second half on Saturday, Feb. 8, 2014 at Allen Fieldhouse. by Nick Krug

1 – For this sigh, we'll do one of those roll-your-eyes and throw-your-hands-up deals for the night turned in by KU freshman Joel Embiid. You'd be hard pressed to find anyone who said anything other than the fact that Embiid struggled against the Mountaineers, yet he still wound up with a double-double of 11 poitns and 12 rebounds in 17 minutes. When is a guy is that naturally gifted and that talented than he can record a double-double on an off night while playing six minutes below his average, all you can do is sigh. 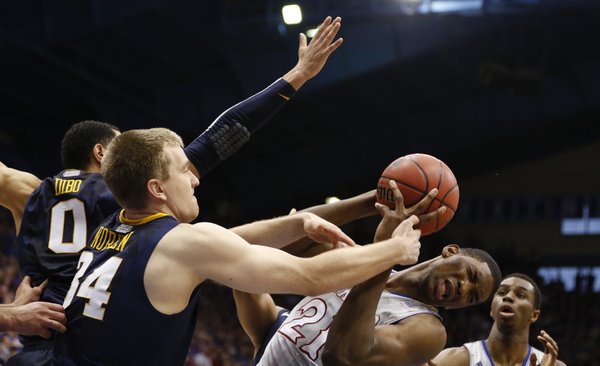 Kansas center Joel Embiid is fouled as he pulls away a rebound from West Virginia forward Kevin Noreen during the second half on Saturday, Feb. 8, 2014 at Allen Fieldhouse. by Nick Krug

2 – It wasn't a good three-point shooting night for the Jayhawks, who made just 4-of-14 from downtown for 29 percent. Other than Wayne Selden, who finished 3-of-5 from three-point range, KU got just one other three-point make from its roster. On a night when you dominate your opponent 46-18 in the paint, that's not such a big deal. But this team's inconsistent three-point shooting can't be overlooked and is still a bit of a concern. For the season, KU has made 129 of 351 three-pointers, good for a 37-percent shooting clip. But it's the total number of makes that is the bigger sign of where they're at. The 129 three-pointers made is the lowest total in the past four seasons, trailing last year's mark of 132 by just a couple, but way off the pace set by the 2011-12 team (141) and the 2010-11 team (168).

3 – Since winning national player of the week honors after shooting 7-of-8 and 7-of-9 in back-to-back games earlier this season, KU junior Naadir Tharpe has taken a step back with his shot. That's not to say Tharpe has played poorly since then, just that he hasn't looked to shoot as often and hasn't made them as much either. Part of it could be his desire to get everyone else involved. He's always claimed that that's his No. 1 goal every time out an I believe him. But this team seems to play at a higher level when he's scoring. Maybe Saturday was just balancing out his hot performance against Baylor, where he was 9-of-13. Combined, that's 11-for-20. Very good. But in the other games since that hot streak (not counting Baylor) Tharpe made just 8 of 21 shots. I'm not worried about the percentage there, more than number of shots. That's an average of just four attempts per game.

• Improved them to 18-5 on the season, against the nation’s most difficult strength of schedule.

• Was the Jayhawks’ 111th straight win against unranked opponents inside Allen Fieldhouse dating back to the 2006-07 season.

• Made Bill Self 3-0 all-time against WVU, and dropped Mountaineers’ head coach Bob Huggins to 0-7 against Kansas.

The Jayhawks travel to Manhattan on Monday for a rematch with Kansas State at 8 p.m. at Bramlage Coliseum. KU dismantled K-State 86-60 Jan. 11 at Allen Fieldhouse. 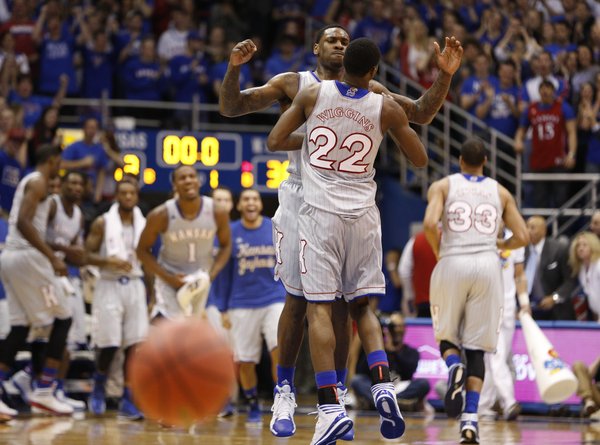