The Day After the day after: Baylor 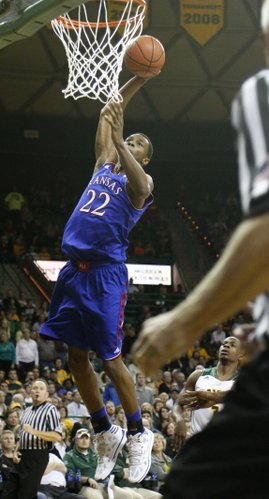 Kansas guard Andrew Wiggins leaps to put down a runaway dunk in the second half of the Jayhawks' win over Baylor Tuesday, Feb. 4, 2014 at Ferrell Center in Waco, Texas. by Mike Yoder

Apologies for the one-day delay on “The Day After,” folks. Yesterday's national signing day football festivities kept me occupied from sun-up to sun-down.

If you missed any of that, check out our signing day blog that ran for nearly 12 hours and this signing day wrap-up story that explains how the Jayhawks enjoyed a smooth day and came away feeling pretty good about the 2014 class.

Now, back to the basketball...

A few days before it arrive, the Kansas vs. Baylor game in Waco, Texas, looked like just another game on the schedule.

But then the Jayhawks lost at Texas, Baylor won at Oklahoma State and that set up an all-of-a-sudden huge game for both teams. Clearly, Kansas was up for the challenge, as the Jayhawks played great defense, dominated the glass and came away with a 69-52 victory.

Despite a third consecutive quiet half from Andrew Wiggins and an all-around off game from Joel Embiid, the Jayhawks dominated the Bears after a slow start thanks largely to the inspired play of point guard Naadir Tharpe and reserve big men Tarik Black (6 points, 9 rebounds in 23 minutes) and Jamari Traylor (4 points, 3 rebounds in 10 minutes). Both were critical to KU controlling the rebounding situation and both helped offset the slow night from Embiid. Unlike last Saturday at Texas, when no one stepped up to pick up the slack when KU's starters struggled, the Jayhawks got a much more inspired effort from a lot of guys in this one and came away with a key road victory while maintaining control of the conference race.

1 – Wayne Selden's defense on Baylor sharp-shooter Brady Heslip. After watching Heslip drill three three-pointers while being guarded by Naadir Tharpe and Frank Mason in the game's early minutes, Selden switched on to Heslip and shut him down the rest of the way. After starting 3-of-4 from three-point range and hitting four three-pointers in the first half, Heslip finished just 4-of-10 from downtown for the game and 4-of-14 from the floor overall for 12 points, zero in the second half. Those numbers came in 35 minutes, so, thanks to Selden's defense, the Bears' essentially played 4 on 5, offensively, during the final 30 minutes of the game. 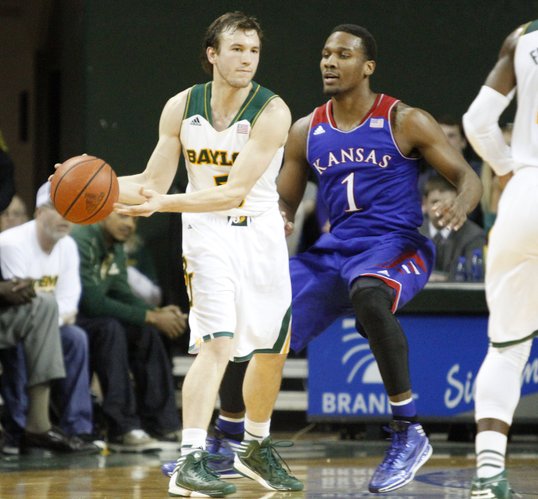 Kansas guard Wayne Selden (1) defends Baylor guard Brady Heslip (5) tight during the second half of the Jayhawks' 69-52 win over the Bears Tuesday, Feb. 4, 2014 at Ferrell Center in Waco, Texas. by Mike Yoder

2 – Baylor's zone gave KU some trouble early on but the Jayhawks snapped out of it and started doing a much better job of attacking the zone to build their eight-point halftime lead. Naadir Tharpe led the charge by getting into the teeth of the zone but Perry Ellis, Tarik Black, Jamari Traylor and even KU's wings did a nice job of finding room at the high post, attacking through the lane and getting easy buckets or put-back opportunities for offensive rebounders.

3 – By now, everyone knows Naadir Tharpe had another big game, but I think one of the most impressive parts of Tharpe's game was the fact that he didn't force anything despite feeling really good about his night. Here's what I mean. Tharpe, who finished with 22 points (one off of a career-high) reached the 20-point mark with 10 minutes still to play. It looked as if he would shatter his career high at that point, but he did not force shots or worry at all about his offense down the stretch. His goal was to steer the Jayhawks to an easy victory by making the smart plays and getting others involved. As Bill Self has said before, Tharpe has become a heck of a closer. Perry Ellis also deserves props for a strong start and for finishing at the rim, which built his confidence and helped the Jayhawks weather the slow start.

1 – It's hard to know exactly what the issue was but Joel Embiid definitely had one of his worst games as a Jayhawk. It wasn't just his stats — 1-for-6 shooting, 5 points, 4 fouls, 3 turnovers in 17 minutes — that made this one look bad. Embiid just looked out of sync on both ends and seemed frustrated throughout. Is the knee still bothering him a little? Was the pregame NBA talk in his head? 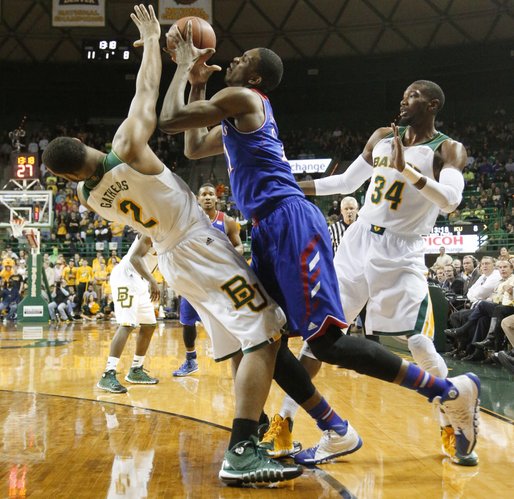 Kansas center Joel Embiid, right, draws a foul charge as he drives into Baylor player Rico Gathers during the first half on Tuesday, Feb. 4, 2014 at Ferrell Center in Waco, Texas. by Mike Yoder

2 – Although the Jayhawks finished with a flurry and cruised to victory, they made things a little tighter than they needed to. After building a 40-29 lead early in the second half, the Jayhawks allowed the Bears to climb back and cut the lead to just a few points instead of delivering the knockout blow. Doing such is easier said than done, especially on the road, but KU let a golden opportunity to bury the Bears early slip away.

3 – For the most part, this was a pretty solid bounce-back game for the Jayhawks, so let's make the third reason to sigh because of a sigh of relief. This group, even the guys who weren't here last year, was very focused on making sure that one loss didn't turn into two the way it did during a three-game losing streak last year, and they went out and took care of business against a team and in an environment that could have been much more difficult.

The Jayhawks' road win at Baylor:

The Jayhawks return home Saturday to take on West Virginia at 3 p.m. at Allen Fieldhouse. The Jayhawks and Mountaineers have not faced each other yet this season.

Kansas forward Jamari Traylor flexes his arms from the bench to celebrate a score late in KU's win over the Baylor Bears, Tuesday, Feb. 4, 2014 at Ferrell Center in Waco, Texas. by Mike Yoder

West Virginia has become a contender since conf play opened. Beat OU yesterday and are 6-4 in conf. However it will be back at home so that will help. But look for a closer game then expected. West Virginia is quietly a top 5 conf team as of now.

Could Wiggins and Embiid both be hitting the "freshman wall" at the same time? I don't even know what that means, but they've certainly been in a bit of a funk the last few games, despite relative production in different areas and on different nights.

Wiggs set back-to-back career highs in the two games before Texas, and then had great overall stats against Baylor – although his scoring was mostly in the second-half. So "the last few games" worth of "funk" could only include the one game in Texas. Not to worry.

It seemed to me that the body slam by Ridley that was apparently considered incidental contact really messed with Embiid's head. Definitely does not seem to correlate appropriately with the flagrant foul at ISU.

Could Embiid be bothered by the inconsistencies in the officiating? Especially to a player somewhat new to the game it has to be frustrating to go from one game to another and not be clear what is a considered a foul and what is not. Getting thrown down and ran over for either no calls or fouls against seems to have Embiid confused, as am I. That taken on its own is bad enough, but when you consider Embiid has been called for flagrants for less, it is downright baffling. I think this has definitely hurt his aggressiveness, and it has him back to thinking way too much while he's out on the court.

We are doing what we need to do to win and move on to the next game. I would not call it pretty, but who cares at this point. Its a road win. We are well positioned now to close this out. Would sure like a 3 game lead when we go down to OK State. Would be nice to have a 10th in the bag to defuse that Game Day crowd, which I am sure they will rally for.

Unique ride for us this year, so much in front of us, but much accomplished too.

Hope we stay hungry now and take care of business the next few weeks!

On Reasons to Sigh, Point 2: "Up 40-29, KU missed a chance to put them away". <-- Why do people say this? Did you see KU attempt a shot and happen to miss? You think its so easy to step on the throat. I thought KU played better the 2nd half compared to the 1st half...yet you want them to pull some magic sledgehammer out and end the game at the point you think you wanted? Well, then, why didnt they (KU team) pull out that sledgehammer and climb back in the game vs. Texas? Sometimes matchups and play calls and defensive formations dictate game flow, and of course huge is which players have the hot hand on any given night...Newsflash: it differs nightly.

And speaking analytically, didnt this same Baylor team play KU very tough in Allenfieldhouse? And didnt they just BEAT OSU in Stillwater? And werent they fighting for their lives? And given that backdrop, someone thinks KU should have just blown em out on the road, with a misfiring Embiid...how plausible is that?

Disagree with Point 2. Be thankful we pulled away late to make it a 17pt win. THAT is called putting it away. Baylor just wasnt going to roll over for Self's babyHawks.

Could the NBA statement of humility and the freight train of Texas bigs contributed to a temporary lapse in a developing swagger? These minor psychological challenges will be conquered and are no match for this remarkable young man's patience, ability, intellect, and conviction.